SCHADENFREUDE ON THE POTOMAC

The first things a new Administration says and does give a pretty clear indication of where its heart lies and what its priorities are. Sometimes this is reassuring to its base and unifying to the country as a whole – JFK’s Inaugural Address, for example, was just that.

Sometimes they are neither of those things, and while Biden’s own Inaugural Address had a unifying theme, his first actions did not – horrifying those who voted against him and largely disorienting his own base, with the partial exception of a love-struck media crooning his praises to a degree that would embarrass a North Korean media used to heaping adoration on their Dear Leader.

I cannot help feeling a sense of Schadenfreude (malicious pleasure in the misfortune of others) for Biden’s boys & babes, except for the fact that this train wreck is all too likely to take us all down with it.

Well, we have a pretty clear sense now of Democrat priorities or at least those of President (?) Biden: bring illegal immigrants into the census & franchise; push Federal support for transgenders to the limit (destroying among other things girl’s/women’s sports); and codify a Federal abortion package.

COVID-19 relief and the much-touted stimulus package? Not so much, maybe March, have to wait until they get another 5,000+ page bill loaded with pork when all it would take is a one-page piece of legislation now. But hey, gotta have your priorities left (er, correct), no?

It is these last two items that are causing such grief – most of it still silent, of course, on the Left. As of this writing, all of the left-leaning women’s organizations have maintained a thunderous silence on the implications of opening girls and women’s sports, bathrooms and locker rooms to biological males self-identifying as women.

A few conservative women’s groups have pointed out that this means at a minimum the ruin of women’s sports – the odd amazon aside, almost all cannot compete with biological males whatever their mental state. “Evangelicals for Biden” can now contemplate younger versions of the new Secretary of Education and Assistant Health Secretary sharing locker rooms and showers with their daughters – I do not expect to hear many “hallelujahs” from them.

And what about the immediate relief from the ravages of COVID-19 promised by Biden on the eve of the Georgia senate runoff on January 5th, which did so much to give the Democrats both U.S. Senate seats? Well, Democrat-run cities and states are now rushing to lift lockdowns they imposed on their residents – apparently a Democrat administration in Washington D.C. makes the whole pandemic so much less threatening.

Amazon is now offering to expedite shipments of the vaccine – and no, don’t ask why this didn’t happen while Trump was still in office, and whether thousands of lives could not have been saved had Amazon done this a month ago, why be picky?

But the promised $2,000 stimulus check to individuals has been walked back to $1,400 and its arrival pushed back at least two months – no, don’t complain and don’t hold your breath, just be grateful “orange man” is gone and someone or something else is in the White House.

The bottom line of all this is that what is happening is worse than the worst fears many of us had. Is it because the Democrats know the election was stolen, and still wonder if the proverbial “other shoe” will drop at some point? Are they trying to get the most controversial things done first while attention is on the growing censorship of opposing voices and the growing efforts to make Trump supporters non-persons and strip them of their degrees? Who knows?

Gridlock – Biden May Or May Not Win, But Trump Remains ‘President’ Of Red America [VIDEOS] 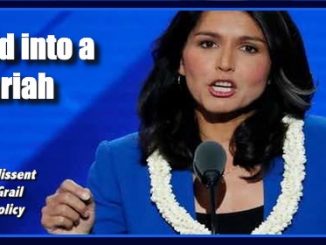