Funny how it works… The same week Ukrainian President Petro Poroshenko imposed martial law on much of the country, the International Monetary Fund assured him that key parameters of the 2019 budget were on track for a proposed $3.9 billion new aid program agreed to last month which is designed to help the country maintain financial stability and the trust of investors, especially ahead of an uncertain election period next year.

IMF Managing Director Christine Lagarde personally made the assurance in a phone call with Poroshenko on Wednesday — the same day the Ukrainian president signed the new martial law legislation into effect. According to Ukraine’s popular independent news agency Unian:

It was particularly underlined that the introduction of the martial law does not influence the interaction with the IMF. 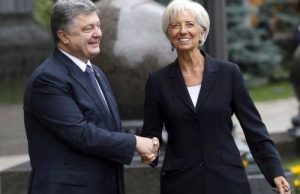 Poroshenko’s press service said in a follow-up of a telephone conversation with Lagarde: “The Head of State informed Madame Lagarde about the adoption and the key parameters of the state budget of Ukraine for the year 2019. Madame Lagarde noted that, according to the IMF’s preliminary estimates, the key indicators of the state budget of Ukraine are in line with the parameters agreed with the Fund.”

Lagarde called the conversation “constructive” according to Reuters. An official statement released by Lagarde after the Wednesday phone call said:

The president informed me about the key parameters of the 2019 budget, which was recently approved by parliament and is currently under review by IMF staff. The preliminary assessment is satisfactory and the process is expected to be completed shortly.

The new agreement inked in October is to span 14 months and takes the place of a prior $17.5 billion aid program from 2015 that has sought to prop up Ukraine’s war-battered economy. It is subject to Ukraine approving a 2019 budget that meets IMF requirements, with ultimate approval expected by the IMF’s executive board to come later in the same year.

Per Kiev-based Unian’s commentary of the phone call: “Madame Lagarde also confirmed the IMF’s readiness to continue the good cooperation with Ukraine and to support the country in the implementation of its reforms,” according to the report. 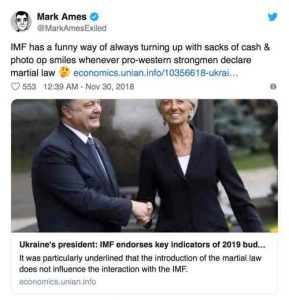 On Friday, a mere two days after the “constructive” phone call with Poroshenko, the Ukrainian president announced that all Russian males ages 16-60 would be banned from entering Ukraine as part of implementation of 30 days of martial law over ten provinces.

Martial law is in effect until December 26 following the Russian Navy seizing three Ukrainian ships and 24 sailors in the Black Sea last Sunday as the crew stands accused of “dangerous maneuvers” in Russian territorial water.

All that remains to be said is summed up in the observation of journalist Mark Ames, who aptly noted: “IMF has a funny way of always turning up with sacks of cash & photo op smiles whenever pro-western strongmen declare martial law.” 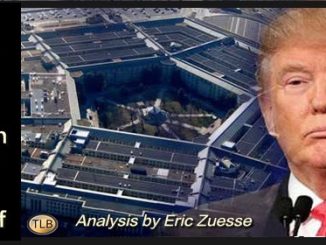