ER Editor: Dr. Bonnie Henry is the provincial health officer for our home province of British Columbia, a Canadian province, perhaps the most beautiful and liveable, hit particularly hard by all sorts of woke attitudes, Covid and vaccine tyranny, etc. In that respect, it resembles the US states lying south of its border – Washington, Oregon and California.

To see the insidious effect of globalist action at work there, look no further than this brilliant, eye-opening documentary by Aaron Gunn on what the globalist-affiliated mayor of the City of Vancouver, Kennedy Stewart (booted out of office this past October 2022 by Ken Sim, who hopefully isn’t a recruited WEF shill), has done to a key part of the city in order to reduce it to chaos, death quite literally, and catastrophically low real estate prices:

We’d like to see a turn-around for this city and province, Alberta-style.

Check out this short video on Dr. Henry (we don’t agree with its general view of vaccines, however). The MSM had clearly made her into some local media celebrity during this period of tyranny:

POLICE ON GUARD FOR THEE 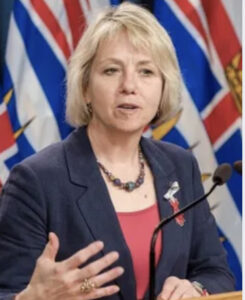 The lawsuits continue to pile up against health authorities for their actions in battling SARS-CoV-2.

This segment touches on the Class-Action certification hearings in British Columbia, where a group known as the Canadian Society for the Advancement of Science in Public Policy (CSASPP) have filed legal action against Dr Bonnie Henry. Due to provincial legislation in British Columbia, this type of hearing is required to certify a legal action as a Class Action Suit. Essentially, that means that a small group of representatives can represent a larger group of people who allege they have suffered similar damages from the action(s) of the defendant(s).

It was encouraging to hear that the courtroom was packed and the Judge gave fair consideration to having the matter broadcasted, despite the expected resistance of the government lawyers. Interestingly enough, no legacy media outlets were present or even acknowledged this event.

We wish the CSASPP the best of the luck in their endeavor and hope for fair hearings as they move forward with this matter.

As the lawsuits continue to pile up, we hope that the public health officials will take note that their heavy-handed, demonstrably unjustified response to Covid 19 was inexcusable and groups such as the CSASPP will continue to hold them accountable through the legal avenues available.

B.C. Doctor Removed from Hospital Duty after Speaking Out About COVID Vaccine Side Effects