Fourteen people were arrested on February 3 in raids in the Austrian capital of Vienna and the city of Graz.

Prosecutors said the coordinated action, which involved 800 officers, was part of an ongoing investigation into suspected membership in the terrorist organization ISIS.

Police also reportedly raided unofficial mosques where supporters of ISIS, against which the Trump administration has declared war, may have been meeting.

Among those arrested, at least four were from the Balkan country of Bosnia-Herzegovina, a former federal unit of Yugoslavia. They are suspected of being part of the so-called Bosnian Network, run by a preacher who received a 20-year sentence in July 2016 for recruiting young fighters for ISIS.

Known by the name of Ebu Tejma (real name Mirsad Omerovich), he “brainwashed” dozens of people ages 14 to 30 and enlisted a number of them to fight for ISIS in Syria.

Among other things, Ebu Tejma was implicated in the recruitment of two minor-age girls to fight in Syria.

According to Bosnia-based terrorism expert Dzevad Galijasevich, the true base of Ebu Tejma’s network is in the Wahhabi community operating in the Bosnian village of Maoca.

Wahhabism, the radical strain of Islam that originated in Saudi Arabia, has been identified by the European Parliament as the “main source of global terrorism.”

The problem, according to Galijasevich, is that very little is being done in Bosnia to counter Islamic radicalism, even though “practically every terrorist attack launched in Europe over the past years can be linked to Bosnia.”

Bosnia’s status as an Islamic terror sanctuary was recently confirmed by the updated U.N. Security Council sanctions list, which said the country has the offices of seven terrorist organizations, including ISIS and al-Qaida. Also, a leading commander of the al-Qaida-linked al-Nusra Front, Nusret Imamovich, hails from Bosnia.

Another Bosnian based security expert, Predrag Ceranich, underlines that the problem of terrorism has been “minimized for years in Bosnia, and there is no political will to solve it.”

He said “para-jamaats” — unregistered mosques or Muslim congregations preaching radical Islam — in Bosnia are “spreading like viruses,” even as Bosnian Muslim political leaders, such as Bosnian Presidency member Bakir Izetbegovich, claim the country is successfully integrating with the EU and the West.

And therein lies the problem, according to Galijasevich. For the past 25 years or so, Bosnia has been the darling of liberal “humanitarian interventionists” who have nurtured its image as a supposedly helpless victim of Serbian, i.e., Christian “aggression.”

That narrative has allowed an Islamist base in the Balkans, the southeastern gateway to Europe, through which almost a million mostly Muslim migrants have poured in over the past 18 months, causing social and political upheaval on the continent.

According to Galijasevich, “during the 1990s, mujahideen from the Arab world flooded Bosnia, and after the war settled there, married Bosnian women, and continued to live there. These people to this day have close ties with the centers of terrorist power that finance various extremists groups with money from Saudi Arabia, Qatar, and similar countries.”

As former NSA analyst John Schindler shows in his well-documented book, “Unholy Terror: Bosnia, al-Qaida, and the Rise of Global Jihad”, in the 1990s Bosnia was the successor of Afghanistan, becoming a “training ground” for mujahideen and other holy warriors, with “substantial support” from the U.S. government. The support included illicit arms shipments, training, logistical and, perhaps most importantly, political and media support.

In the Clinton-era State Department, Bosnian Islamists, led by Alija Izetbegovich — author of the “Islamic Declaration” and founder of a Muslim Brotherhood-inspired Bosnian Muslim youth organization, the so-called Young Muslims — were portrayed to the West as “democrats,” “freedom fighters” and victims of “persecution” at the hands of the Christian Serbs. The Serbs ultimately were bombed by NATO, which served to advance Izetbegovich’s vision of an Islamist Bosnia.

The 1999 U.S.-led NATO bombing of Yugoslavia served to support another majority Muslim population, the Albanians of Kosovo, whose goal was to break away from Serbia – the larger of rump Yugoslavia’s remaining two republics.

Again, Islamist radical help was engaged, including that of Osama bin Laden himself, who was seen meeting at least twice with Hashim Thaçi, then leader of the terrorist Kosovo Liberation Army and the breakaway statelet of Kosovo in late 1998.

So, what is the result of the Clinton-Bush-Obama pro-Islamicist policies in the Balkans after all these years? The region is rife with poverty, criminal gangs, human and drug smuggling and a hotbed of radical Islamic indoctrination and expansion.

Muslim Albanian-majority populated Kosovo was unilaterally recognized by the U.S. and other Western powers as an independent state in 2008, even as its structures have cleansed more than 200,000 Christian Serbs from the province, destroyed more than 150 churches, some of them several hundred-year-old cultural monuments, while keeping the remaining Christian population living in ghetto-like enclaves, with no freedom of movement, work or life. All this with the tacit, and often active approval of Western diplomats, international officials and NATO “peacekeepers.”

According to a 2011 report by the London Guardian newspaper, “NATO documents, which are marked ‘Secret,’ indicate that the U.S. and other Western powers backing Kosovo’s government have had extensive knowledge of its criminal connections for several years.”

Criminal activity included the smuggling of weapons, drugs and even human organs, with current Kosovo leader Thaçi being named as “head of (Kosovo’s) human organ and crime ring” by a Council of Europe inquiry. All this did not stop then-senator and recently departed U.S. Vice President Joe Biden from promoting “democracy” in Kosovo: “[A]droit diplomacy to secure Kosovo’s independence could yield a victory for Muslim democracy… a much-needed example of a successful U.S.-Muslim partnership.” 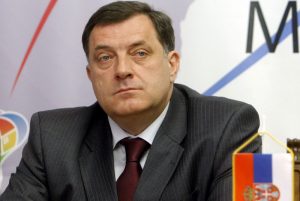 In Bosnia, while continuing their support for the Islamist leadership in the capital of Sarajevo, Western, and especially U.S. diplomats, have been busy pressuring and applying sanctions against Bosnian Serb leaders, including current president of the Serbian-majority entity, Republika Srpska – who are fiercely resisting Western efforts to force them to become a minority in a Muslim majority state.

As one of its last acts, Obama’s State Department first refused to issue a diplomatic visa to Milorad Dodik (pictured right), president of Republika Srpska, to attend the presidential inauguration on Jan. 20, and then slapped sanctions against him for supposedly violating the U.S.-brokered Dayton Peace Agreement, which has held Bosnia together since 1995. 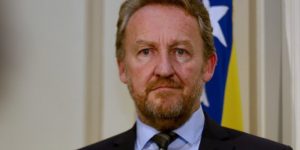 On the other hand, the Bosnian Muslim leader, Bakir Izetbegovich (pictured left), who has been photographed flashing the four-fingered sign of the Muslim Brotherhood, an organization that the Trump administration may soon designate as a terrorist organization – apparently can do no wrong in Western governments’ eyes.

In fact, Dodik’s main offense lies in his continued resistance against the Sarajevo Islamists in their efforts to abolish the celebration of Republika Srpska’s Day of the Republic, as part of what he sees as a larger ploy to slowly extinguish the majority Christian Serb-governed unit within Bosnia.

The Obama State Department’s last-minute sanctions imposed against Dodik were a parting demonstration of America’s continuing pro-Islamist policy in Bosnia and the Balkans as a whole. The Trump administration has the opportunity to make that policy a thing of the past.

Naturally, the first theater in the newly announced war against ISIS and its affiliates and related Islamist groups will be the Middle East, beginning with Syria and Iraq. However, if ISIS is to be thoroughly defeated, it will be necessary to eradicate its offshoots and affiliates worldwide.

One of its chief sanctuaries and seeding grounds is the Balkans, thanks to the Clinton-G.W. Bush-Obama legacy. The strategy must entail not only the elimination of illegal mosques, congregations, training camps and Shariah law-governed enclaves, and the cutting off of terrorist financing, money laundering, people and drug smuggling channels, but a change in policy toward the region’s political and state actors. The West must move away from favoring pro-Islamist politicians and policies, as has been the case in Bosnia, Kosovo and Macedonia over the past two and half decades, and form new alliances with majority Christian states, entities and political forces willing and eager to join the new global anti-radical Islamist coalition in the making.

Looming is whether U.S. policy still will force Bosnia’s Christians to succumb to an aggressive Islamist majority in Sarajevo, which has pretensions to taking over all of Bosnia and consolidating, through the so-called Green Transverse, a large Islamist stronghold in the Balkans.

In addition, critics say, the process of so-called state building in majority Muslim Kosovo, at the expense of majority Christian Serbia, should be halted and reversed. Its eventual unification with neighboring, crime-ridden, majority Muslim Albania, which has been tacitly encouraged by the liberal West, would make the entire region into a permanent European trouble spot and terror base.

Indeed, if one were to trace back to the roots of Russia’s post-Soviet resurgence, one would need look no further than Kosovo and the NATO bombing of Yugoslavia. Having accepted Western promises of cooperation and peaceful coexistence during the 1990s, Russia watched in anger as the U.S.-led Western powers effectively provided air and bomb cover for Islamist terrorists and criminals on the heels of what they had already done in Bosnia. 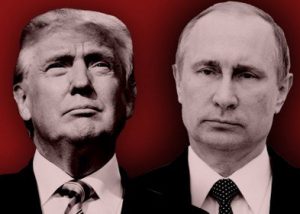 It was only a few months later that the docile Boris Yeltsin resigned his presidency in favor of a previously little known former intelligence officer by the name of Vladimir Putin on New Year’s Eve in 1999. Having seen how the West operates in the Balkans, the Russians weren’t going to allow a repeat under their noses, first in Chechnya, and then in Georgia and the Ukraine.

So, if trust is to be rebuilt and a true, pro-active and successful anti-Islamist terrorist coalition is to be formed around the axis of the U.S. and Russia, after the Middle East, the next best place to move is the Balkans.

And more than that – the U.S. treatment of the region’s Christians will be a litmus test of the sincerity of the Trump administration’s commitment to preserve and restore the foundations the common, Christian-rooted civilization. 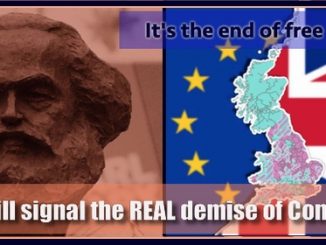