PAY ATTENTION: FASCIST HEALTH SYSTEM IS ON THE HORIZON

Playing Simon Says as a child was fun, a good way to keep alert and observant.

However, we are now witnessing a grown-up version, only this game differs as it is all about conforming in a rather dictatorial manner.

The NHS chief, Simon Stevens, has suddenly become rather vocal in recent times, and without being asked, he wants to round up two particular groups of people for a real life version of Simon Says. In this version of the game, he makes the statements and everyone must accept them – otherwise you’re out. 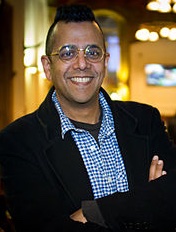 This think tank is presently challenging the PSA decision to accredit the Society of Homeopaths. They are particularly attacking those practitioners who offer CEASE therapy, which the Simons and their colleagues claim is a potentially harmful therapy from which the public needs to be protected, especially autistic children at whom it is aimed.

You would be quite right to question this kind of rhetoric – this echoes the demands of a totalitarian regime. Do as Simon says or you will be condemned!

Simon Stevens has a background in the world of debt-forced privatisation, and for example, in the past when he held a variety of positions, including CEO for United Health Group, he attracted criticism for lobbying for UHG contracts in the NHS.

Is Simon’s goal to privatise our health service?

Ideally, Simon wants to also remove any individual that is an anti-vaxxer as they are having an effect on vaccine sales.

Simon (Stevens, pictured below) is getting coverage in the mainstream media, articles such as ‘The Telegraph’s piece ‘Homeopaths warning mothers not to have children vaccinated’ published on 2 November 2019. Katherine Rushton (pictured below), the lead journalist on this piece, was one of the undercover reporters who posed as a mother concerned about their vaccination decision and visited Dr Jayne Donegan, a medically qualified homeopath, for a consultation. 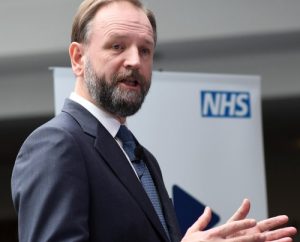 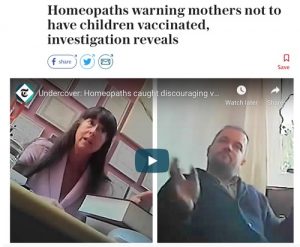 Katherine Rushton and her colleagues received praise from Health Secretary Matt Hancock. “I pay tribute to the outstanding investigative work of the Telegraph in exposing the way that this misinformation has spread,” he stated.

Katherine, who, like Simon Stevens, also graduated from Oxford University, has had a number of years working in the media. Back in 2012 she attended and reported on a Media Summit in Abu Dhabi, where the honorary speaker, Bill Gates, talked about how he had pledged $10 billion for this decade to vaccines. No doubt his words may have influenced her belief in vaccination as, within her very biased hit piece on homeopaths, Katherine (pictured) includes the usual official narrative about complications from measles, mumps and rubella, and a graph showing how measles infection had ‘skyrocketed’ in Europe last year. There was no attempt of any balance, or investigation of the official data.

Obviously, Katherine chose not to include any of the information she was presented with in her one-hour consultation with Dr Donegan, including graphs illustrating the enormous declines in death from measles and whooping cough before vaccines were introduced. Instead, she emailed Dr Donegan on Thursday afternoon, Halloween in fact, declaring her trick (undercover reporting) and Dr Donegan was offered less than 24 hours to comment without even being given an opportunity to read the article that was due to be published on Saturday 2 November.

This is not sound investigative journalism at all; rather, this was clearly an attempt to demonise homeopaths and continue the onslaught of attacks towards those who question vaccines, which is now rife in mainstream media.

And actually, Katherine Rushton will have to brush up on her investigative skills as she had assumed Dr Donegan was a member of the Society of Homeopaths and had intended to allege that the doctor had broken the code set out by the society until Dr Donegan corrected her before the piece went to print.

No doubt more skulduggery will continue from the media, especially if Simon says.

Gangster Pharma: Destroy Homeopathy, If You Want The Cash

Is the Attack on Homeopathy by Simon Singh’s Pressure Group – the Good Thinking Society – a Campaign of Deception?