On the topic of the disturbing attitude toward the elderly in the UK that is emerging from this virus panic, we also recommend this op-ed piece by Neil Clark for RT titled ‘Culling’ the old & weak: Eugenics and social Darwinism rear their ugly heads in the Covid-19 pandemic.

On the topic of the Do Not Resuscitate (DNR) forms being handed out like sweets/candy to the elderly and disabled in the UK, see this personal story from journalist Damian Wilson for RT titled Doctors are sending out ‘do-not-resuscitate’ forms telling people like my disabled daughter to sign them, I find that chilling.

We remind readers of the horrific, misnamed Liverpool Care Pathway, that got exposed some years back where the elderly that became infirm in hospital were simply left to die in their beds due to a deliberate privation of food and water, with relatives forbidden to visit them. We recommend this report, including video discussion, by UK Column from 2013. Of note:

Thousands of people dying in conditions of dirt and neglect, elderly deliberately dehydrated and starved, ‘care’ pathways implemented to end the lives of those most heavily dependent on the NHS for treatment and care, money paid by government for NHS Trusts to meet and exceed targets for those placed on death pathways, those blowing the whistle on these and other serious concerns bullied, victimised, pushed out of their jobs and gagged under ‘Compromise Agreements’, those guilty remain in their jobs – fully backed by Government Ministers. No police investigations over the deaths, which many would class as murder – if not genocide, on the figures of over 100,000 deaths.

Is the coronavirus hysteria being used to serve a similar agenda? And in which countries?

Here’s a short sampling of Twitter reactions today found under the search term ‘Do Not Resuscitate’: 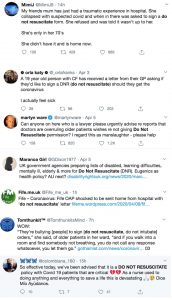 Those who support such a policy, it seems, do so on the basis of scarce resources – the ‘why should an elderly person who’s going to die soon anyway get those valuable resources that would be better used on a younger person who will enjoy more lifespan’ argument. The problem is, as writers like Neil Clark above query, why are we putting gazillions of taxpayer money into war and defence spending instead of into public health services, for example? Making this pro-withdrawing-lifesaving-services argument simply masks the issue of where our money goes and assumes the extreme neoliberal/austerity position – that the public must make do with less because ‘there’s less to go around’. The banks bailed out endlessly with QE and our money are testimony to the untruth of that.

Our lockdown was supposed to protect the most vulnerable, the elderly, from Covid-19 – but we’re achieving precisely the opposite

Putting old people under virtual house arrest at home or in their care homes, denying them proper medical care, destroying the value of their pensions – how are these devastating measures supposed to be helping them?

Covid-19 is a disease that is disproportionately dangerous to older people and those with serious underlying health conditions. The most frightening figures from the overall death toll attributable to the disease arise where health services are overwhelmed and cannot cope with large numbers of elderly people who have contracted it. In short, the lockdowns that we are seeing around the world should be largely justified by saving the lives of older people. 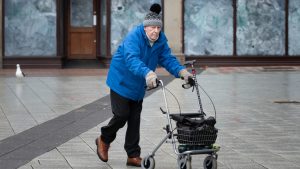 An elderly man pushes a mobility walker in front of a closed down shop in Cardiff City centre on March 17, 2020 in Cardiff, Wales. © Getty images / Matthew Horwood
.

The trouble is that stories are also emerging which suggest that older people are not being protected anywhere near as well as we might expect. This first became apparent in Italy. Even as early as mid-March, there were reports that Piedmont had put in place guidelines to refuse intensive care for the over-80s if resources became too stretched.

It is true that old and frail people may simply not be well enough to benefit from being put on a ventilator. But having a policy simply based on age suggests the lives of older people are regarded as less important. In the Netherlands last week, there was controversy over older people receiving phone calls from doctors asking questions about intensive care treatment, such as being put on ventilation, should they become infected.

In the UK, there seems to be a proliferation in the use of ‘do not resuscitate’ orders (DNRs) – now formally called ‘respect forms.’ DNRs are valuable where a patient, their family and doctors agree that attempts to resuscitate could do more harm than good when the patient suffers cardiac or respiratory arrest. But the use of DNRs has become promiscuous in recent weeks. A doctor’s surgery in south Wales sent out letters to some patients – not just older people but those with disabilities and long-term illnesses – asking them to complete a DNR so they wouldn’t be taken to hospital if they got Covid-19.

A Labour MP, Peter Kyle, has warned that care homes in his south-coast constituency of Hove were applying DNRs “en masse,” and there have been reports on social media of GPs signing DNRs on behalf of patients, apparently against their wishes. More commonly, there is pressure on patients to get DNRs in place now, leaving family members and other observers worried that undue pressure has been placed on older people to agree to them.

Indeed, OAPs (ER: old age pensioners) may not even be reaching hospital at all when they become seriously unwell. Barbara Keeley, another Labour MP, has pointed to deaths in care homes where elderly patients weren’t taken to hospital. There have been five deaths at one care home in Salford, and 13 residents at a Glasgow care home died in one week following a suspected outbreak of coronavirus, which also affected two staff.

Some of Britain’s biggest care providers have complained that they have been denied coronavirus tests and that GPs were no longer visiting care homes, saying: “You just feel completely abandoned.”

Moreover, conditions in care homes are alarming. Always chronically underfunded, they are having to take on many of the functions of hospitals without anything like the trained staff, personal protective equipment (PPE) and other resources required. The dedication and courage of low-paid care-home workers in these circumstances gets little acknowledgement.

The virus can spread easily within care homes. Last month, the Spanish military was called in to help at care homes, and found elderly patients abandoned and even dead in their beds. With so many staff off sick or self-isolating, agency staff who work in several different homes are a potential means for spreading disease. All the while, the homes are in lockdown, so that families cannot see their loved ones. For those care-home residents with dementia, being cut off from their families – the only people they may still recognize – will be a terrifying experience.

Even for those elderly people able to live in their own homes, the effect of the lockdown – no one over 70 years is supposed to leave their home or have visitors – could be debilitating. Firstly, the isolation could have a very negative impact on their mental health. Secondly, sheer lack of physical movement could lead to circulatory problems or a loss of physical capability that is never recovered.

Finally, there is the claim that anyone who criticizes the lockdown is choosing to put the economy ahead of the lives of older people. But the dichotomy is false. Many older people rely on savings and private pensions, too. That kind of income is threatened by a severe economic downturn. Pension pots are serviced by company dividends, which are being increasingly canceled as profits dry up. Interest rates have been slashed, so savings will earn zero interest. If penny-pinching around social care was bad before this crisis, won’t it be worse when governments are racking up huge debts to pay for emergency economic measures?

Ultimately, there is something more intangible, too: freedom. Who decided on behalf of older people that they should be placed under informal, if not explicit, house arrest? Did anyone ask what level of risk they were prepared to accept? As they come towards the end of their lives, might the dangers of Covid-19 seem less than the risk of losing some precious months of living life to the full?

When we are told that society must be locked down for weeks or months, we need to balance the harms of such measures against the harms of a more liberal approach. With all the focus on cases and death tolls, we are missing the devastating consequences of these lockdowns for the very people they are supposed to protect. If we really want to protect the elderly and vulnerable, we should be working fast to normalize society as soon as possible. 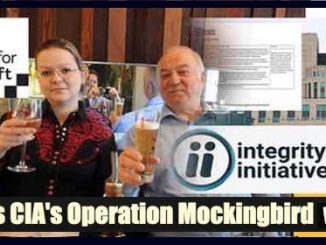 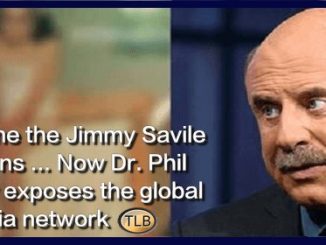