ER Editor: We also recommend this short piece by AFP via The Telegraph – French general rebuked after telling Notre Dame architect to ‘shut his mouth’ after renovations. The RT piece below raises the key issue – why aren’t the citizens getting what they were promised instead of some (likely) post-modern piece of incoherent architectural nonsense?

It’s not a fight you expect to see very often, but the reconstruction of the fire-gutted Notre Dame cathedral has led to a showdown between the chief architect and General Jean-Louis Georgelin, appointed by French President Emmanuel Macron to pilot the restoration project. 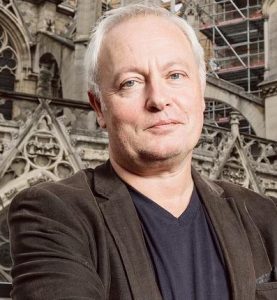 Chief architect Philippe Villeneuve (pictured) has been faced with an ambitious five-year deadline to restore the famed cathedral’s interior, roof, and the iconic spire completely destroyed in the April blaze.

But now it appears Georgelin and Macron have run into trouble with Villeneuve’s vision of the spire’s look – which for him is staying as true as possible to the original design. Georgelin and Macron both want to redesign the spire to give it a more “contemporary” look, and their side has an argument that the 19th-century addition is in itself a redesign of the lost 13th-century feature. Villeneuve, meanwhile, has made it clear that if he is to be the architect on the project, then it must be identical to what stood before. This is also the only way to meet the five-year deadline, he adds.

A public argument about the restoration broke out late Wednesday at the French National Assembly, and Georgelin did not mince words there. Asked about Villeneuve point of view, the general said: “As for the chief architect, I have already explained that he should shut his mouth.” He added that all involved with the project need to “move ahead in wisdom so that we can serenely make the best choice for Notre Dame, for Paris, for the world.” 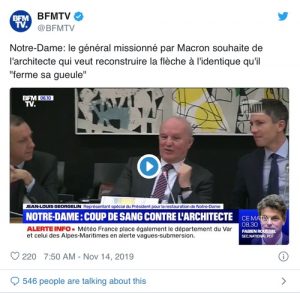 A final decision on the spire will not be reached until 2021. But the architect is not likely to budge. Last month he told RTL that “either I restore it identically… or they make a contemporary spire and it will be someone else [doing it].”

Georgelin is already facing backlash for his remarks. Minister of Culture Franck Riester said on Thursday in a tweet that his comments are “not acceptable,” adding “Respect is a cardinal value of our society, and as public officials we must be exemplary.” 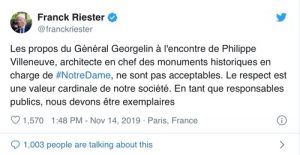 A number of outraged netizens also took offense to the harsh statement, some even calling for the general’s resignation, or outright removal from office.

“[Only two] things to do: make sure that General Georgelin is removed from office, give the floor to Mr. Philippe Villeneuve and follow his recommendations,” one user tweeted, while another said parliament should “demand his immediate resignation.”

What is strange about the whole debate is that it is happening at all. When a “contemporary” redesign was first mentioned, there was a major public outcry. The French Senate even voted that the cathedral must be restored to its original glory.

While the reconstruction project would seem to be a straightforward endeavor, it has been anything but. Many see the building and its restoration as a point of national pride. The cathedral has stood tall since the 12th century and is central to the history of France, and regarded as an architectural gem of the Western world. It is also France’s number one tourist site. While there have been restoration projects in the past, this attempt to make the cathedral “contemporary” smells of an opportunistic vanity project. This is true for many especially in the wake of the tragic fire, which reminded people around the world just how important the cathedral really is.

Considering public outcries in the past, it should come as no surprise that many are taking to social media to slam Macron and his general for seemingly going against what the people were promised by the Senate when this entire multi-million euro project was approved in the first place.

French President Macron: “Vaccinate EveryTHING That Can Be Vaccinated”