Representatives of the March Against Monsanto campaign reported that glyphosate, the major ingredient in Monsanto’s Roundup pesticide, ‘is consistently being discovered in everything from hospital feeding tubes and tampons to the breast milk of nursing mothers.’ 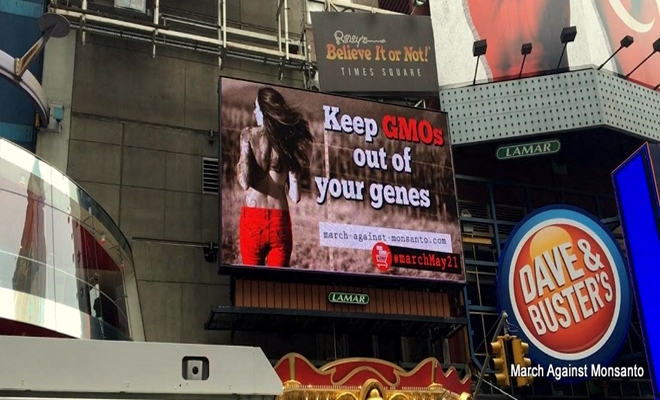 NEW YORK — Shoppers and tourists in Times Square will be alerted to the dangers of genetically modified organisms thanks to a new billboard campaign.

The billboard features a topless woman, seen from behind, and the line: “Keep GMOs out of your genes.”

Studies by the Times Square Alliance suggest that over 300,000 people enter Times Square on foot every day, with pedestrian counts rising as high as 480,000 on the landmark’s busiest days.

In a May 17 statement, representatives of March Against Monsanto wrote that the billboard would raise awareness of the deleterious health and environmental effects of GMO crops and glyphosate, the key ingredient in Monsanto’s Roundup pesticide:

“Glyphosate, the cancer-linked herbicide that is an essential component in the expansion of GMO crops, is already being banned around the world over safety concerns. Here in the United States, glyphosate is consistently being discovered in everything from hospital feeding tubes and tampons to the breast milk of nursing mothers.

It is because of findings like these and many others that we have decided to launch our first official Times Square billboard campaign, which will help spread awareness to thousands of people from around the world.”

Last year’s March Against Monsanto brought activists into the streets in over 400 cities, RT reported:

“Activists accuse the agricultural corporation of selling toxic chemicals, which are bad for people’s health, water supplies, vital crop pollinators and environment in general. The giant is also criticized for its attitude towards food safety regulations and a staunch opposition to GMO labeling. Meanwhile, small farmers blame Monsanto for monopolizing the seed market.”

The movement also objects to Monsanto’s close ties to the U.S. government. U.S. foreign aid to countries including El Salvador, Ukraine, and Haiti is often tied to agricultural reforms that require farmers to plant Monsanto seeds.

The international agricultural giant is currently embroiled in a years-long legal battle with Argentina over efforts to collect royalties from farmers who replant soybean seeds from previous GMO crops. Earlier this month, giant grain trading corporations like Cargill Inc. and Archer Daniels Midland objected to Monsanto’s flaunting of international regulations that could prevent traders from selling American farmers’ crops to Europe.

You can find other informative articles at MintPress News 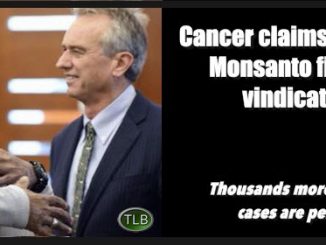 Video: How COVID Vaccines Can Cause Blood Clots and More: Dr. Sucharit Bhakdi