ER Editor:  We also recommend this recent article by Alex Lantier titled Naming new French prime minister, Macron coordinates austerity with unions. (As we always do in relation to posts by WSWS, we are against neoliberalism but not capitalism.) Of note about Macron’s new technocratic PM, Jean Castex:

While the government reshuffle does not modify one iota the military-police diktat and antiworker program of the Macron government, it is significant as a warning to the working class. Castex, whom Libération described as a “technocrat in the Matignon” prime ministerial palace, made his career by cutting spending and boosting profit levels in public hospitals in close coordination with the unions, before supervising Macron’s ending of the COVID-19 lockdown.

Castex is being brought in to coordinate closely with the trade unions the austerity policies that Macron and the banks will impose in response to the COVID-19 pandemic.

As workers around the world launch strikes and protests against mass sackings and bank bailouts imposed by the ruling class, Castex’s nomination as prime minister is a further warning: the only way forward for these struggles is to organize them independently of the trade union bureaucracy. The French unions, which have long postured as a “radical” and “class struggle” variants of their corrupt cousins in America or Germany, are also totally integrated into the state machine.

The historic failure of the capitalist governments of America and Europe to promptly stop the COVID-19 pandemic is setting the stage for an international offensive of the bourgeoisie against the working class. While trillions of euros in public funds are being handed over in bailouts to the banks and major corporations, workers are being told to pay for the crisis. In France alone, over 11 million workers are on short-time work, and over 400,000 have lost their jobs even before the latest wave of mass layoffs at firms like Airbus, Air France, and Renault.

These ruthless, socially-destructive policies of the financial aristocracy are expected to trigger the deepest economic crisis since the 1930s Great Depression, even worse than the 2008 crash. Last month Macron announced in a speech that his government would accept mass layoffs and corporate bankruptcies, apparently of smaller businesses that the banks—flush with a €1.25 trillion bailout of public funds from the European Central Bank—want to let go to the wall.

Since Castex’s appointment on Friday, it is already clear that the new cabinet will be charged with an escalation of the anti-working class policies of the previous one. It is overseeing the Macron administration’s deconfinement (ER: ending the lockdown) policy and an ending of any restrictions on business activity during the coronavirus pandemic. Economically, it is charged with completing major attacks on social programs, including on pensions, education, unemployment assistance and social care, under conditions in which hundreds of billions of euros have been made available to support big business and the banks during the pandemic.

Prior to the cabinet announcement, Castex made a highly publicised visit to police headquarters in the working class La Courneuve suburb northeast of Paris, on Sunday (pictured). Castex told police that he had come to visit them “to show the support of the government of the Republic. I know that you expect 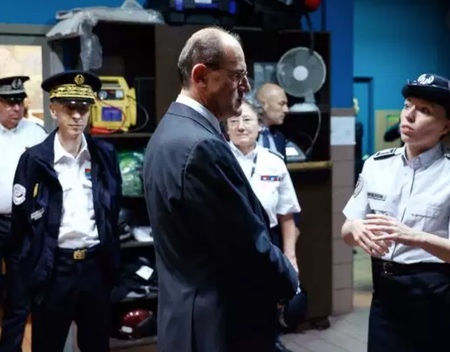 actions from us. They will come. You expect from us recognition and support. They will be without fail.” He asked police whether there were “areas where you are not able to go.”

The statement of blanket support for the police comes after a wave of mass protests internationally against police violence, including demonstrations of several tens of thousands in Paris, triggered by the murder of George Floyd in the United States. The French protests have additionally demanded justice for the killing of 24-year-old youth Adama Traoré in 2016. The selection of Saint-Denis was particularly provocative, as it is among the most notorious areas of police harassment of predominately poor and immigrant working class youth in France.

The Macron administration is sending a clear signal that it will maintain its brutal police crackdown on mounting social protests against its austerity program, and that the police will continue to enjoy virtual immunity. (ER: this is not an unfair judgement about police conduct in relation to the social protest mounted over 72 weeks by the Gilets Jaunes.)

Yesterday, Castex announced that the new interior minister will be 37-year-old Gérald Darmanin, a member of the conservative Republicans, replacing Christophe Castaner. Castaner backed violent police crackdowns on “yellow vest” protests and rail and public sector strikes last year, but triggered opposition among police during the George Floyd protests by stating that the government would not tolerate clear cases of racism from police officers. The police unions, which are bastions of support for the far-right National Rally, organized protests against Castaner, who walked back his statements within days.

The other major ministries of defence, education, health care, and finance all remain unchanged in the hands of Florence Parly, Michel Blanquer, Olivier Véran and Bruno Le Maire. The ministry of culture will be run by Roselyne Bachelot-Narquin, who was the minister for solidarity and social cohesion under the right-wing administration of Nicolas Sarkozy from 2007-2010.

Castex gave an interview to the Journal de Dimanche published over the weekend to indicate the direction of the government. He stated that the epidemic had “demonstrated the urgent need to regain our economic sovereignty,” adding that it would be necessary to “go further” from the reforms begun already under Macron. “We are not in a political break from what has been done, but we must show that we know to face up.[sic] And that obviously requires a development of our methods.”

He signalled that the pension cuts imposed this winter would be intensified: “To say that we will re-examine a subject does not mean to turn back. It means showing how we can adapt to new circumstances, which are painful. For example, the crisis has sharply worsened the deficit of our pension system. I wish to restart the dialogue with the social partners [trade unions], this is indispensable. … At minimum, we must set a new social agenda.”

Castex indicated that he would be working closely with the trade unions to implement this austerity program, adding: “I open my hand to the trade unions and the employer organizations so that we may move forward together.”

Due to the pandemic, the Macron administration had temporarily postponed the pension cuts, which triggered mass railway and public sector strikes in December and January. The cuts include raising the effective retirement age by two years and introducing a points-based system that will allow for a continuous reduction in real pension levels. Castex indicated he intends to proceed with these cuts rapidly, in addition to cuts in unemployment assistance and the “dependency” program for carers.

Castex himself has a long track record. Between 2005 and 2007, he spearheaded the Sarkozy government’s reform of the hospital system, which included the introduction of the “Pricing-per-action” hospital model. This transformed the public hospital funding model so that all their funding was based on the number of operations performed, with each operation priced at a set amount. This reform had a devastating impact on the health care system, pushing public hospitals to send home patients immediately after their operations, and driving the closing of hospitals that were ruled “under-performing.” (ER: The run down, underfunded state of the hospital system has been the subject of public protests by the medical profession.)

In an interview with the regional press on Thursday, Macron declared, “We cannot be a country which wants its independence, its social, economic and environmental reconquest, and be a country where we work less throughout our life” than the rest of Europe.

Macron has already declared that there will be no increases in taxes on business or the wealthy to pay for the more than €500 billion in bailouts throughout the coronavirus pandemic, four-fifths of which was given in loan guarantees to corporations. In other words, the hundreds of billions handed over to the corporate and financial elite is to be paid through a stepped up assault on the pensions, social programs, jobs and wages of the working class.

This is under conditions of a social crisis of historic proportions that is developing in France and internationally in the midst of the pandemic. Already, mass layoffs of tens of thousands of workers have been announced, including by Airbus, Air France, Renault and Sanofi, which are predicted to result in the destruction of tens or hundreds of thousands of additional jobs. Various estimates show hundreds of thousands of jobs in the retail sector are likely to be permanently wiped out.

“The social impact of this crisis makes one’s back run cold,” it said. “The ground is more ripe than ever for a social explosion. … The revolt of the ‘yellow vests,’ in the Winter of 2018, and the recent fight against the pension reforms—which the president intends to place under work this summer—have left indelible traces in public opinion. … We can fear the worst if a larger portion of the population mobilises—beginning with the youth who have already seen themselves sacrificed, hit by the economic and social crisis.” A spark, it wrote, could “provoke a flame.”