A 31-year-old politician has been chosen to lead the anti-establishment Five Star Movement ahead of national elections. With M5S clearly ahead of traditional parties in the polls, he may be Italy’s next prime minister. Amidst a surge of fanfare and excitment on Saturday, Luigi Di Maio was named the leader of Italy’s anti-establishment Five Star Movement (M5S). As M5S continues to lead in the polls ahead of a general early next year, the 31-year-old politician is hoping to steer his party to a national victory.

In 2013, at the age 26, Di Maio became the youngest-ever MP to be elected as the Vice President of Italy’s lower house of parliament, the Chamber of Deputies. On Saturday, he sailed past seven other contenders to secure his party’s nomination for prime minister.

“The responsibility you have entrusted to me is great, but together we can do anything because we are the Five Star Movement and we must never forget it!” Di Maio told the jubilant crowd at the party conference in Rimini, according to Italian daily Corriere della Sera.

Di Maio has long been groomed for party leadership by M5S founder Beppe Grillo. The 69-year-old comedian-turned-politician founded the movement in 2009 after becoming fed up with political gridlock as well as the corruption and nepotism personified by the administration of former Prime Minister Silvio Berlusconi. 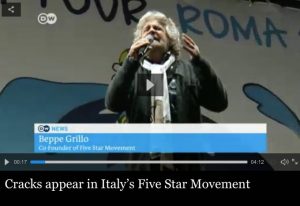 Grillo has often courted controversy by means of his highly popular blog, where he has taken aim at Italy’s ruling elite – but also in 2016, when he supported statements made by then-President Elect Donald Trump that the European Union is a “total failure.” Grillo believes the EU allows northern Europe to thrive at the expense of southern Europe.

ER recommends other articles by DW.com