Mass immigration was imposed on Europeans using the excuse of helping refugees from war-torn countries. However, only 1.4% of the current migrants are Syrian war refugees.  The current migrants from mostly peaceful countries in Africa, South Asia, and the Middle East are economic migrants in search of generous welfare.

Massive waves of migrants, nearly 100,000 so far this year, have washed up on the shores of Italy for economic gain.  And more than 2,000 have died at sea.

Initially, mass immigration was sold to the European public as aid for Syrian refugees escaping the war in their country, but now Syrian refugees account for only 1.4% of the migrants who journey to Italy.  Most asylum seekers are economic migrants who are seeking generous European welfare benefits.  Nigerians make up nearly 20% of the arrivals in Italy, followed by the nationals of Eritrea at 13% and then Sudan, Gambia, Ivory Coast, Guinea, Somalia, Mali, Senegal and Bangladesh.  Most of these countries are not currently involved in war.

A whopping 85% of asylum requests in Italy are from men, with only 4% from minors.

Many believe that Europe is being invaded with the intention of overwhelming and replacing the native population.

Anti-immigration activists have accused NGO rescue ships and aid workers of collaborating with human traffickers in bringing huge numbers of foreigners to settle in Europe illegally.  Italy, with the backing of the EU, is trying to stem the flow of migrants by imposing a code of conduct for NGOs in the Mediterranean that prevents them from entering Libya’s territorial waters and helping migrant boats that are not in distress. 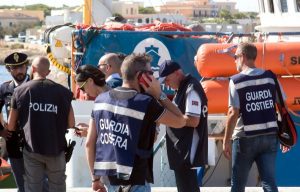 Last week, Italian coastguards seized a humanitarian boat that was suspected of aiding illegal immigration.  The boat belongs to a German NGO group, Jugend Rettet (pictured), that has refused to sign the code of conduct.  Ambrogio Cartosio, a prosecutor in Sicily, said that he had become suspicious of NGOs after noticing some rescue crews seemed to know in advance where to find migrant boats, and were making rescues without informing the Italian coastguard.

Doctors Without Borders, which owns multiple boats, has also refused to sign the code of conduct.

“NGOs, smugglers, and the mafia, in cahoots with the European Union, have shipped thousands of illegals into Europe under the pretext of rescuing people, assisted by the Italian coast guard which coordinated their activities.

Human traffickers  contact the Italian coast guard in advance to receive support and to pick up their dubious cargo. NGO ships are directed to the “rescue spot” even as those to be rescued are still in Libya. The 15 ships that we observed are owned or leased by NGOs have regularly been seen to leave their Italian ports, head south, stop short of reaching the Libyan coast, pick up their human cargo, and take course back 260 miles to Italy even though the port of Zarzis in Tunis is just 60 mile away from the rescue spot.

Of the 15 NGO charity rescue boats that are operating in the area, several were owned by Doctors Without Borders, while the owners of the others are unknown.

They estimate that migrants living in hostels cost Italian taxpayers $15,300 per year, while other migrants disappear into the black economy, sleeping rough or living in illegally let and overcrowded flats.

According to the Spectator, human traffickers, who are aided by ‘charity’ rescue ships, netted between an estimated $4 billion to $7.8 billion in 2015 for everything from passports to transport in a rubber dinghy.  This black market industry is now deeply entrenched and dangerous.

In conclusion, the original point of Europe opening its borders was to welcome refugees from Syria and other war-torn countries, but most migrants are from countries that are not at war, so the excuse that was used for displacing native Europeans is no longer valid, and it is time to end the charade.

ER recommends other articles by Need To Know News by G. Edward Griffin