“In much of the country… depopulation is advancing. Moving into the empty spaces have been waves of immigrants, many from North Africa and the Middle East. The migrants have filled vital gaps in the labor force, but the transformation of Italian towns has left increasing numbers of citizens resentful, fearful for their identity.”

He went on to call this transformation “a kind of pioneer of Western decline”. Already, the effects of mass migration are becoming dramatically visible in many of Italy’s elementary schools. In just the last few days, examples from two large cities have surfaced.

The first was in Turin, Italy’s fourth largest city, where there are now elementary school classes with not even one Italian child: “In all classes, school principal Aurelia Provenza explained, the percentage of foreigners is very high, equal to 60% of the total number of pupils“.

The second example comes from Bologna. “In my son’s kindergarten there is a serious integration problem, I have to take him away,” says Mohamed, a 34-year-old of Moroccan origin who arrived in Italy when he was 4 years old.

“I don’t want to be seen as a racist myself as I am Moroccan, but the municipality must know that there is no integration by putting more than 20 foreign children into classes”.

At the time of enrollment, Mohamed explained, they had seen drawings with flags of all nationalities in the school, but, “when we arrived at school the first day, we found ourselves in a class with all foreign children. The teachers are even struggling to pronounce the children’s names.”

We have now reached a paradox: immigrants are taking their children out from classes where, under multiculturalism, segregation is surging. “School performance falls when classes exceed 30% foreigners; it is a crucial threshold that should be avoided or otherwise monitored”, said Costanzo Ranci, professor of Economic Sociology, and author of a recent report.

Both of the above cases have been the subject of much public debate. In Italy, last month, the number of migrants arriving from Africa surged, after having declined for most of the last two years. The migrant reception center on the island of Lampedusa, the front line of Italy’s migration crisis, is now in a state of “collapse” due to the rapidly rising number of arrivals. The entire south of Italy is now trying to deal with migrants.

According to projections from the UN Population Division, the population of sub-Saharan Africa will double in 30 years, adding an additional 1 billion people and accounting for more than half the global population growth between now and 2050. Italy, which already has the third-largest population of migrants in Europe, is undergoing an “unbearable” crisis, and now faces the real risk of an “Africanisation“, as Stephen Smith called it in his book, The Scramble for Europe.

There are many voices of concern. Cardinal Robert Sarah, author of a new book, The Day Is Now Far Spent, about the crisis of the West, compares the current influx of migrants to the invasions of barbarians that brought down the Roman Empire. If Europe’s policies toward migrants do not change, Sarah warns, Europe will be “invaded by foreigners, just as Rome was invaded by barbarians.”

“If Europe disappears, and with it the priceless values of the Old Continent, Islam will invade the world and we will completely change our culture, anthropology and moral vision”.

An Italian think-tank, Fondazione Fare Futuro, also just predicted that due to mass migration and the different birthrates of Christians and Muslims, by the end of the century half of the population of Italy could be Muslim. In just ten years, the number of migrants in Italy has surged by 419%.

The native Italian population is already shrinking rapidly. Without the foreigners, every year native Italians would die (615,000) at twice the rate of births (380,000). Eurostat, the European official statistics office, calculates that by 2080, one-fifth of Italians will come from a migration background (11 million of Italy’s 53 million).

A recent report by the Italian national statistics office noted that the country is in a “demographic recession” not seen since World War I, and 250,000 young Italians have fled the country. “Italy exports young graduates and imports migrants”, wrote Il Giornale. Italy is expected to lose 17% of its population by 2050, and — even without immigration — half by the end of the century.

A Caritas-Migrantes report recently documented that since 2014, the decrease in the number of Italians is equivalent to the population of a large Italian city, say, Palermo (677,000). The dramatic decrease, however, has so far been offset by migrants.

Immigration is once again becoming a political question. Just weeks after forming a government with the Five Star Movement, the Democratic Party is advancing the so-called “birthright citizenship” — a pledge to reverse the stringent migration policy of former Interior Minister Matteo Salvini. In Latin this right to citizenship is called ius culturae. The new law would allow foreign minors under the age of 12 to become citizens after just five years at school in Italy. The bill is being advanced by Laura Boldrini, a former president of Italy’s Parliament, who famously said: “The lifestyle of the migrants will be ours”. Will Italians, as in those elementary schools, integrate into the new culture of the migrants?

The current government knows perfectly well what is at stake. “From now to 2050 and 2060, we will have to face an epochal question from 50 to 60 million people who will arrive in the Mediterranean world”, MP Nicola Morra, MP in the governmental majority, recently said.. 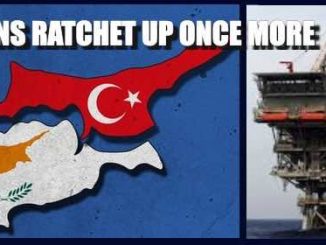 Déjà vu: the gas conflict around Cyprus is just getting worse