ER Editor: A former minister from the communist party in Lionel Jospin’s government, Jean-Claude Gayssot, who is now the director of the southern French port of Sete, has offered to take this ship in, pending the permission of the French government. (Migrants: le port de Sète prêt à accueillir l’Aquarius si Paris donne son accord, selon Gayssot) 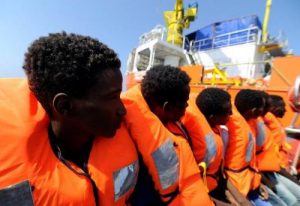 The migrants were picked up off the coast of Libya last week by The Aquarius, a rescue vessel run by Franco-German charity SOS Mediterranee and Doctors without Borders (MSF). Also aboard Aquarius is Reuters journalist Antonio Denti, who reports that both Malta and Spain have denied docking as well, with Spain telling the NGO in a statement “At the moment, Spain is not the safest port because it is not the nearest one.”

“It can go where it wants, not in Italy!” said Italy’s new Interior Minister, Matteo Salvini on Monday,  suggesting that France, Germany, Britain or Malta as possible destinations.

“Stop human traffickers and their accomplices,” he added.

Rome has accused its EU peers of not sharing the burden of incoming migrants, after more than 650,000 have come to Italy since 2014 through a network of well funded NGOs and other means of travel. 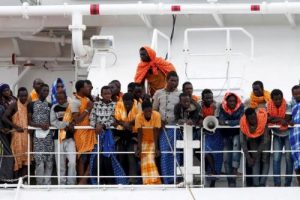 Last June, the Aquarius made headlines after spending nine days at sea playing chicken with Salvini – who had just assumed office as part of the country’s new coalition government, when some 630 stranded migrants were denied port. After supplies ran dangerously low, the Italian Navy escorted the migrants to Spain, which agreed to take them.

Salvini has called the NGO vessels a “taxi service” and accused them of human trafficking – a charge the charities deny.

Transport Minister Danilo Toninelli, who oversees ports and the coast guard, said the ship’s flag country, which is Gibraltar, should take responsibility.

“At this point, the United Kingdom should assume its responsibility to safeguard the castaways,” Toninelli said on Twitter.

The British foreign office was not immediately available for comment.

The European Commission was in touch with several EU states and trying to help resolve the “incident” with the Aquarius, a spokesman in Brussels said. She added that while Britain could theoretically be considered as a destination port, it was not practically feasible to bring the ship there. –Reuters

On Monday, Malta’s armed forces noted that it had already rescued 114 migrants from a rubber dinghy which was taking on water around 53 nautical miles south of the Mediterranean island. They will arrive Monday afternoon.

Following pressure from Italy and Malta, most of the NGO vessels stopped patrolling off the coast of Libya, while overall departures from the North African country have fallen precipitously this year. That said, human trafficking is pushing some boats out to sea, where an estimated 720 people died in June.

COVID-19: Targeting Italy and South Korea? The “Chain of Transmission of Infection” 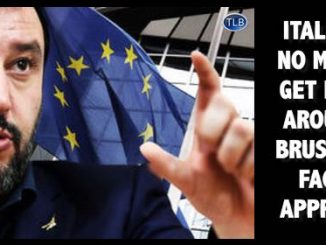 Bill Gates Could Supply Your Next Coronavirus Test Kit