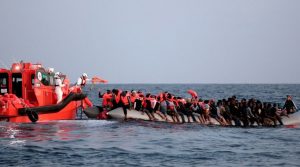 The debate was sparked recently by Sicilian prosecutor Carmelo Zuccaro, who told the Italian media that he had “evidence that there are direct contacts between certain NGOs and people traffickers in Libya,” but didn’t know if it could be used in court.

Zuccaro accused “certain” NGOs of taking calls from Libya, saying he had “ascertained facts” proving that rescue boats turned off their transponders and turned on lamps to show migrant boats where they were. 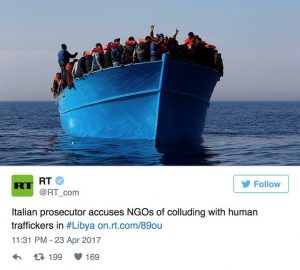 “I am 100 percent in agreement with prosecutor Zuccaro, as he asked a real question,” Alfano told reporters in Taormina, Sicily, on Saturday, il Fatto Quotidiano reported. “Those who become indignant at the drop of a hat are hypocrites.”

“Zuccaro has not generalized, he did not fire generically at all the NGOs, but we need to go all the way,” he continued.

Prime Minister Paolo Gentiloni joined the conversation in Brussels on Saturday, saying, “if magistrates have usable and credible information, the government will certainly not stand in the way” of an investigation.

Zuccaro, who has been investigating migrant trafficking along with other prosecutors, told the Italian parliament in March that he knew traffickers and rescuers were in contact, but, at that stage, said he had no proof. Italian Justice Minister Andrea Orlando has since told him to present any evidence he has.

Some of the organizations involved in migrant rescue include Doctors Without Borders (Medecins Sans Frontiers), SOS Mediterranee, Save the Children, and Malta-based Mobile Offshore Aid Station (MOAS). All have denied that they are colluding with people traffickers. 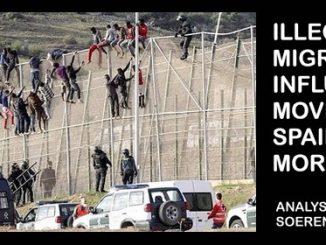