ISIS is busy scouting for new recruits from inside European criminal gangs, a new research paper from a professor of international cooperation at Brandeis University revealed

Author of the research, Jytte Klausen, says it is “gangster jihadism” to denote the fresh nexus between the criminal underworld and radical Islamic groups.

This new alliance with the criminal underworld marks a major shift in recruitment for Islamic extremists, because previously young adults were radicalised in mosques as well as online.

Klausen pointed out that at least twenty-two percent of jihadists who were captured or killed in Brussels between 2012-17 were known to have had a criminal history.

“We have a growing gang problem in Europe, and gangs have increasingly taken on a politicized nature,” Klausen says. “We haven’t previously seen this overlap between street gangs and politicized violence.”

The brain behind the November 2015 terrorist attack in Paris, Abdelhamid Abaaoud, belonged to a gang and had committed robbery and assault, while Abderozzak Benarabe, known as “Big A,” traveled to Syria to fight against President Bashar al-Assad. Benarabe is a convicted drug trafficker and the leader of one of Denmark’s most notorious organised-crime gangs.

Gang members typically commit crimes ranging from petty theft and drug offenses to murder. The gangs from which ISIS now recruits include both Muslims and non-Muslims, and mostly thrive in poor neighbourhoods of medium-sized European cities.

“You’re talking about street-side thugs who start out joining the gangs and then segue into jihadism,” Klausen explained.

Previously jihadist groups rejected criminals because they had violated Islam’s tenets. But because the groups’ traditional recruiting methods have been hampered by law enforcement, they have been forced to look into alternatives.

Gang members have the added advantage of already being inclined toward violence, and their criminal endeavours are a way to raise funds for jihadists while remaining under the radar.

Klausen has called for fresh measures to combat gangster jihadism. “More needs to be done to control jihadi gangs in prison and the networks linking radicalized members inside and outside prisons,” she said.

She noted that foreign fighters should also be prosecuted for crimes committed outside Europe. “Investigating and highlighting such atrocious crimes may help turn young people against the narrative of terrorist groups as defenders of Islam,” she said. 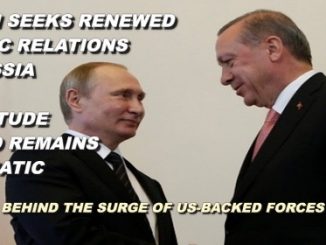 The Erdogan Putin Meeting: “A New Landmark in Bilateral Relations?”

The introduction of the euro causes prices to skyrocket in Croatia