The Minister of Foreign Affairs and Foreign Economic Relations of Hungary, Peter Szijjártó, said that the countries of the East are contributing to important changes in the world economy. He spoke about this in a speech at the public forum “Transit” in the city of Tihany, reports RIA Novosti.

Szijjarto called the countries of the East the engine of economic change in the world and called for recognition of the trend of merging the economies of the West and China.

Hungarian Minister of Foreign Affairs and Trade Peter Szijjarto has stated that Budapest is not alone in its reluctance to slap sanctions on Russian energy exporters, but that other countries, who are under the influence of the “liberal mainstream,” don’t dare to pursue policies based on their own interests.

Speaking at the TRANZIT public forum in Tihany, Hungary on Saturday, Szijjarto said that he would like to clarify that his country is “not even willing to negotiate any further sanctions” pertaining to the oil and gas sector.

“And I want to say that we are not alone in this,” the top Hungarian diplomat stressed, recalling an episode during a recent EU ministerial meeting which focused on “the issue of limiting oil from Russia.”

According to Szijjarto, during the gathering, “several colleagues” approached him and said, “Peter, you are against it [sanctions on Russian oil exports], right? We are with you.”

“Those who tell the truth are under such amazing pressure from the liberal mainstream that if there is no political stability of a certain level and, as a result, political courage in the country, they simply do not dare to act in their own interests,” the Hungarian foreign minister pointed out.

During the speech, Szijjarto also gave his thoughts on how long Europe will hinge on Russian oil and gas. He argued that “as long as gas cannot be transported by train or in a backpack, Europe will not be able to get rid of dependence on Russian energy resources.”

Last month, Hungarian Prime Minister Viktor Orban insisted that while the sanctions had failed to destabilize Moscow, “Europe is in trouble, economically and politically, and four governments have become victims: UK, Bulgarian, Italian and Estonian.”

“People will face a sharp increase in prices. And the better part of the world deliberately did not support us as well — China, India, Brazil, South Africa, the Arab world, Africa — everybody is aloof from this [Ukraine] conflict, they are interested in their own affairs,” Orban added.

Also in July, Russian President Vladimir Putin admitted that sanctions damage the country’s economy and many risks still remain, but that these restrictive measures inflict more damage on those who imposed them.

Sanctions against Russia were slapped by the US and its allies in late February, shortly after Moscow launched its special operation to demilitarize and de-Nazify Ukraine. In the wake of the West’s anti-Russian restrictive measures, inflation skyrocketed in many Western countries, driving energy prices there to record numbers. 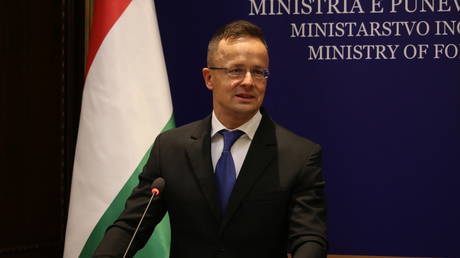 Budapest refuses to negotiate any further EU restrictions targeting Russian energy because there is no current alternative to supplies from Moscow, Hungarian Foreign Minister Peter Szijjarto said on Saturday.

The EU has slapped several rounds of sanctions on Moscow in response to the conflict in Ukraine, and is pushing for a complete phasing-out of energy supplies from Russia.

“We’re not even willing to negotiate any sanctions on energy, be it oil or gas,” Szijjarto said at an economic forum in Tihany, adding that “the courage of the Hungarian government” has helped Budapest to withstand pressure from Brussels.

“There is no security of energy supply to Europe without using Russian sources,” Szijjarto stated, arguing that Russian gas cannot be replaced in the foreseeable future.

The foreign minister added that the “largely misguided sanctions response” to Russia’s military campaign is one of the factors driving up inflation and contributing to a global recession.

Hungary, whose economy is heavily dependent on oil and gas from Russia, was exempted from an EU-wide ban on Russian crude in May. The bloc banned the import of oil by sea, but Hungary continues to receive the commodity via a pipeline.

Hungarian Prime Minister Viktor Orban said last month that Europe has “shot itself in the lungs” with its ill-considered sanctions against Russia.

Russia Moves to Withdraw from WTO, WHO