Globalization and the Rural-Urban Divide

The Neoliberal Corporate-State Order had all the power, and rigged the game to its own advantage.

Many pundits have commented on the remarkable asymmetry of counties won by the Democratic Party (blue counties) and in 2016 and those won by Republican Party (red counties): the Democrats won big in heavily urban counties and the Republicans won most rural counties.

This visible division prompted numerous article such as this: Cities vs. Trump: Red state, blue state? The urban-rural divide is more significant. “Like most red-state cities, Idaho’s capital is remarkably short on conservatives. Last November, while Hillary Clinton mustered only 27.5 percent of the statewide vote, she hit north of 75 percent in some of Boise’s urban precincts. Politically, the city might as well be on a different planet from towns that lie a couple of exits away.”

The article follows a simple and superficially appealing narrative: the reason for the divide is cultural: cities are liberal, the countryside is conservative.

But there must be more to the divide than values and political culture; difficult social issues like addiction that once were defined as urban problems are now rural problems: American Epidemic: The Nation’s Struggle With Opioid Addiction (34:26 min)

Correspondent Bart D. (Australia) recently submitted an insightful description of the decimation of rural economies. Though he is describing rural Australia, anecdotally I see evidence for the same trends in the U.S., Japan and Europe.

I worry that the collective memory required to nurture self-employment and self-reliance have already been lost to much of the populace.

The thing that disturbs me most about the fate of the rural region I grew up in is the huge loss of economic diversity. A list of businesses/functions my childhood town used to have but now does not:

–Bank
–Post office
–Council office
–Roadworks/council depot/workshops
–Mechanics workshop
–2 small convenience stores
–A small ‘all goods’ shop (surviving as a tea/coffee and cake eatery)
–There is a tiny junior school that has been under threat of closure (lack of pupils) for the past few years.

These are the basic building blocks of an economic community. Sporting clubs have perished as have social clubs (and even the tavern is only just staying alive) as the people, and their families, who once worked these family businesses disappear into the state capital with its bubble priced housing and much reduced sense of community cohesion. It’s not just my home town either… there are 3 others near by that have gone the same way.

The only economic activity left is big Agri-Biz. The number of family farms has reduced by about half in the last 30 years; so the scale of operation is huge and the debt matches it. Little of the farmers’ money goes into the ‘local’ or even ‘regional’ economy. It goes to the multinationals: Bank Corp, Chemical Corp, Fertilizer Corp, Fuel Corp, Machine Corp … the economic centres for which are not even in our Nation let alone state or region.

Also worth noting is that the cascade of losses was very rapid. Once we lost our council depot, the town basically withered up economically in just a few years. 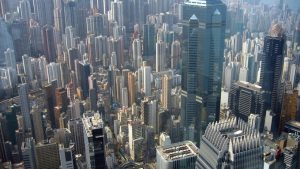 We, the people, are being steadily herded into mega-cities. On the surface it seems like a voluntary migration to pursue economic opportunity… but reality is it’s forced.

Those of us that want to return to these communities to raise the next generation of kids… can’t. There are no viable economic activities to pursue… even with the alleged benefits of internet based opportunity which should make it possible to do most things from most places.

These towns all have beautiful, huge, old stone houses, with huge gardens at prices that are actually affordable to an ‘average’ wage earner… if they could find a way to make said wage living there. Instead we have to cram ourselves into bubble priced houses made of paper and fibro-cement sheeting, crammed onto tiny blocks, where you can hear your neighbours fart from opposite ends of the buildings.

We fool ourselves into believing this style of living is a choice … that we are ‘going where the opportunities are’ … but we lie to ourselves. It’s exciting for a while as a teenager, then when proper adult perspective kicks in you find yourself trapped in suburban bleakness and servitude.”

We can see the outlines of a large-scale dynamic that has hollowed out the incomes and local economies of rural regions around the world: globalization, i.e. the borderless flow of capital, credit, goods and services, a flow dominated by large corporations that work hand in glove with international institutions and governments.

This article gets close to the reality. (Note that “liberal order” doesn’t refer to political liberalism vs. conservatism, it refers to the “neoliberal order” that promotes “free trade”, borderless flows of capital, international institutions such as the World Bank, etc.) The Liberal Order Is Rigged: Fix It Now or Watch It Wither: We did not pay enough attention as capitalism hijacked globalization. Economic elites designed international institutions to serve their own interests and to create firmer links between themselves and governments. Ordinary people were left out. The time has come to acknowledge this reality and push for policies that can save the liberal order before it is too late.

The local economies in rural counties are especially vulnerable to “lower prices always” supply chains that bring in agricultural, mining and forestry products from far away at prices below domestic production costs.

When these industries are gutted by globalization’s low costs, there isn’t much of a service sector left to support employment. Rather, the service jobs in rural areas depend on the ag/mining/forestry jobs. When those jobs vanish, the service jobs evaporate as well.

People have to move to find jobs, and that further pressures the remaining businesses.

There is a much deeper pool of capital and service employment in cities, and so it follows that cities are where the jobs are.

Why is this so? Production and production employment are tradable (following Michael Spence’s work), meaning they can be traded on the global marketplace as interchangeable goods: a computer chip made in China and one made in Japan are interchangeable (quality may vary of course, but as long as the chips perform the same function, they’re interchangeable.)

Service sector employment is largely untradable, as getting a haircut (for example) isn’t something you can have done overseas for less money. Healthcare, education, legal services, restaurants, government–all these job-rich sectors are untradable.

The net result is globalization has an outsized impact on rural production employment and very little impact on urban untradable employment.

Although I don’t have the statistics on hand, I suspect 90% of urban employment is untradable services rather than tradable production. If employment in government, education, healthcare, legal/professional services, tourism, etc. is abundant, all those untradable jobs support a large secondary service sector of other untradable services: cafes, brewpubs, night clubs, etc.

But as the Foreign Affairs article states, this Neoliberal Order is rigged against small businesses, local production, and localized economies. Globalization sweeps all of these away as “uncompetitive.”

But the playing field was never level: the Neoliberal Corporate-State Order had all the power, and rigged the game to its own advantage.

No wonder the rural regions are rebelling–not against the cities, but against the Neoliberal Global Order that has stripped the economic diversity from rural economies. This essay was drawn from Musings Report 18. The weekly Musings Reports are emailed exclusively to major contributors/ subscribers /patrons ($5/month or $50/year).

Will Russia Exit WHO, WTO and Other UN Agencies? 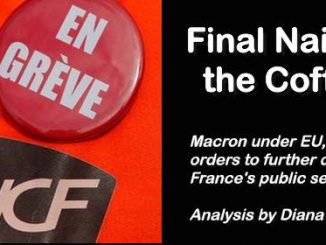 Tragedy of the Cheminots: The Deep Meaning of the French Railroad Strikes 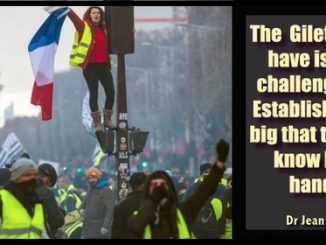 Dr. Jean Bricmont: “Yellow Vests Ask Such Fundamental Questions that No European Government Could Answer Them”