After 4 months without a government, Germany narrowly avoided new elections when on Sunday the country’s Social Democrats backed the start of formal coalition talks with Angela Merkel’s conservative bloc, a move that could end the country’s ongoing political deadlock and bring embattled chancellor a step closer to a fourth term in office, or – if unsuccessful – result in the twilight of Merkel’s political career.

After four hours of debate, a modest majority of the 645 delegates at an extraordinary SPD conference voted in favor of the talks, with 362 voting in favor and 279 voting against. As the FT notes, the negotiations will be based on a preliminary deal struck earlier this month between SPD leaders and the chancellor’s CDU or Christian Democratic Union and its Bavarian sister party, the Christian Social Union.

While the vote passed with a comfortable majority, the result was closer than predicted by party officials, an indication of the depth of the rift within the party. The reason: many SPD members blame its role as junior partner to Merkel for a string of recent poll defeats, and worry that another grand coalition will hurt the Social Democrats’ standing further. They have reason to be worried: according to the latest polls, the party has lost further support in recent weeks, with one survey released this week suggesting the Social Democrats would fall to 18.5% if elections were held now even as the populist AfD continues to gain popular support.

As a reminder, the preliminary deal between the SPD and the CDU/CSU is set to transform Germany deeper into a “socialist paradise” with a promises to hike social spending, tax cuts for low-income earners and a sweeping change in Berlin’s approach to Europe.

Meanwhile further bolstering German influence in European affairs, SPD leader Martin Schulz has put Europe at the front and centre of his pitch to the conference, insisting that a new government would usher in “historic political change [and] a new dawn for Europe”.

“Europe is waiting for a Germany that takes responsibility for Europe and that acts decisively. Without the SPD, that won’t be possible,” he said. “Without the SPD there will not be a courageous impulse for Europe. It’s up to us.”

Sunday’s vote marked a crucial moment in the tortuous four-month effort to establish a new German government, following September’s inconclusive general election which saw a staggering drop in support for both Merkel’s conservative block and the SPD.

Over the past week, Schulz and other SPD leaders had sought to persuade a reluctant party base that there was no good alternative to coalition talks with the CDU. He also argued that the preliminary agreement struck with the CDU, which promises a big increase in social and infrastructure spending, already addresses several key Social Democrat demands.

Schulz, a former president of the European Parliament where he repeatedly sparred with eurosceptic Nigel Farage, has pointed to the chapter on EU policy in particular, which includes a promise to set up a eurozone investment budget as well as a commitment by Berlin to raise its contribution to the general EU budget.

Another crucial argument used by SPD leaders in recent days is that ordinary party members will ultimately have the say over a new Merkel-led “grand coalition”. Mr Schulz has promised to hold a referendum among rank-and-file members if a formal coalition deal is struck.

“The SPD can say No to a grand coalition. But it cannot say No to negotiations,” Thomas Oppermann, a SPD member of parliament, told the FT.

While a welcome sign for Germany’s establishment, the start of negotiations between the two parties hardly guarantees a favorable outcome, and as the FT notes, “many inside the party remain deeply reluctant to revive the alliance with Ms Merkel.” Critics — led by the SPD youth wing — point out that the party has served as the chancellor’s junior partner on two previous occasions, only to lose heavily at the next elections. The SPD fell to just 20.5% of the vote at the ballot in September, which followed four years of a grand coalition government with Ms Merkel.

Should the negotiations end without a resolution, Merkel’s political career will effectively be over. The EU Is Tearing the UK Apart Over Brexit, by Design 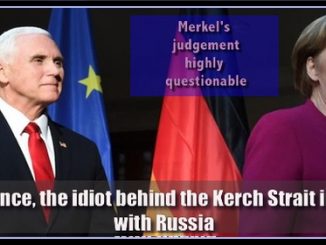