Ah, how France has changed in just five years.

We remind readers of the ‘terrorist’ attack on the Charlie Hebdo offices in Paris on Wednesday, January 17, 2015. A magazine that 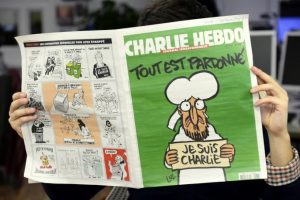 had incessantly satirized, quite offensively by any standards, any and all religions but especially Islam, had a large section of its workforce murdered during a weekly morning staff meeting by AK-toting, black-clad ‘terrorists’ more resembling professional hitmen. By Sunday, many of the world’s leaders had gathered in Paris to pay tribute (there were other targets than just the Charlie Hebdo offices), and ordinary French would defend the Charlie Hebdo publication in their conversations for its rights to freedom of expression. We republish one of its insulting images (above), which we defend its right to publish, insulting Mohammad. Notice that the headwear resembles scrotum. And here is another, guaranteed to anger France’s Muslim population: 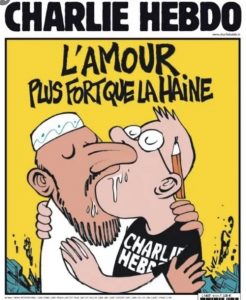 For a useful overview, see this Guardian piece of January 2015 titled Charlie Hebdo’s history of challenging and angering fundamentalists.

Now, a 16 year old cannot go to school – any school – for fear of her safety for her social media comments. But kudos to Mila for speaking out.

A poll published on TV news a few days ago showed the French population about equally divided over whether Mila or anyone had a right to say this sort of thing or not. 50-50? This is troubling.

A teenager has sparked a national debate about blasphemy in France after an Instagram post calling Islam a “religion of hate”. Indeed, France has emerged as one of the greatest threats to free speech in the West, and we continue to face calls for European-style speech crimes, including calls by its President on the floor of the House of Representatives.

Now a teenager in France has triggered a debate over its plunge into speech crimes and regulation after characterizing Islam as “a religion of hate.” She can now be criminally investigated for hate speech under the notorious French speech law.

On a January 18th live broadcast on her Instagram account, Mila, 16, was called a “dirty lesbian” by a Muslim commenter. She responded by saying “I hate religion. The Koran is a religion of hate” and using vulgarity against the religion. She added:

“I am not racist. You cannot be racist towards a religion. I said what I thought, you’re not going to make me regret it.”

Despite receiving death threats and being forced to forego school, she refused to back down and said that she “wanted to blaspheme”. She apologized if she was vulgar and said that she did not want to insult people who practice their religion “in peace,” but “I have absolutely no regrets about what I said, it was really my thought.” 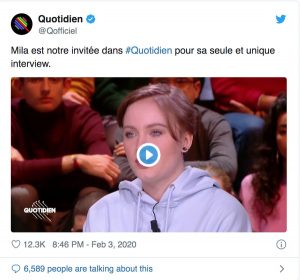 When French justice minister Nicole Belloubet denounced this as an attack on religion and was “an attack on freedom of conscience”. [sic]

This is the inevitable result of speech codes and speech crimes. There is an insatiable appetite to use the criminal justice system to punish those who hold opposing views.

These laws criminalize speech under vague standards referring to “inciting” or “intimidating” others based on race or religion.

For example, fashion designer John Galliano has been found guilty in a French court on charges of making anti-Semitic comments against at least three people in a Paris bar. At his sentencing, Judge Anne Marie Sauteraud read out a list of the bad words used by Galliano to Geraldine Bloch and Philippe Virgitti. “He said ‘dirty whore’ at least a thousand times,” she explained out loud.

In another case, the father of French conservative presidential candidate Marine Le Pen was fined because he had called people from the Roma minority “smelly”. A French mother was prosecuted because her son went to school with a shirt reading “I am a bomb.”

As I have previously discussed, the sad irony of France leading efforts to curb free speech is powerful.

Once the bastion of liberty, France has now become one of the greatest international threats to free speech. It even led a crackdown on the free press with criminal investigations.

Mila has vividly shown how France has replaced its rallying cry for liberty with a demand for conformity.

Perhaps this teenager will awaken enough citizens to the scourge of speech codes and crimes.

With thanks to Zerohedge for their presentation of this article 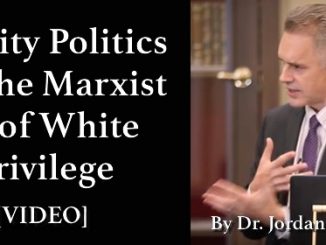