An attempt to share a 2-year-old article by CNBC has revealed what appears to be Facebook participation in minimizing comments made by Zuckerberg affirming his support for censorship on their platform. The article discussed comments picked up on a hot mic during a conversation between German Chancellor Angela Merkel and Mark Zuckerberg where Merkel asked Zuckerberg to censor speech critical of immigrants and Zuckerberg agreed to do so. The decision by Facebook to censor news content online pertaining to comments made by their CEO raises questions about their commitment to transparency and free speech.

The article was first posted to Twitter by Disobedient Media Managing Editor, Ethan Lyle. Immediately after, the article’s URL was copied from the tweet and posted directly onto Lyle’s personal Facebook page. The Twitter link description reports that Merkel was commenting to Zuckerberg about anti-immigrant speech online. The Facebook link description, however, merely states that Merkel chided Zuckerberg over “hate speech.”

Screenshots of the two link descriptions can be seen below: 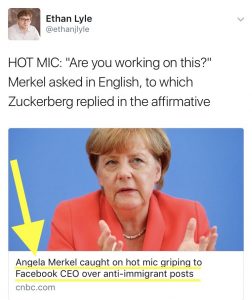 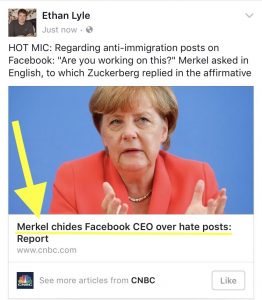 The choice of Facebook to represent Merkel’s comments as pertaining to “hate speech” is disingenuous and false. Nowhere in the original article are the words “Merkel chides Facebook CEO over hate posts” to be found. Facebook’s alternate title minimizes the comments of Mark Zuckerberg affirming his dedication to working with Merkel to censor anti-immigrant Facebook posts. Referring to such speech as “hate posts” both misrepresents such speech and appears to be an intentional attempt to prevent readers from noticing Zuckerberg’s comments which indicate a willingness to collaborate with foreign leaders with the goal of stifling the free speech of citizens around the globe.

The censorship comes after Zuckerberg edited a manifesto to remove an admission that he supported monitoring private channels of communication. This February, Zuckerberg released a 5,700 word essay warning about “isolationist” threats to globalism, stating that Facebook was there to help counteract popular trends towards nationalism and pro-soveriegn state ideologies. The original draft of the essay was “revised” to remove a reference which had revealed that Facebook actively monitored private conversations of individuals accused of plotting terror attacks.

Given the controversial subject matter in the CNBC article, only one conclusion can be made from Facebook’s altercation of its title: it was intentionally worded to conceal comments by Facebook’s CEO signaling his willingness censor dissenting political opinion.

Help spread the word about Censoring. Share this article.

About the writer Ethan Lyle

In Stunning Loss For Merkel, CDU Is Surpassed By Populist AfD In Thuringia Elections 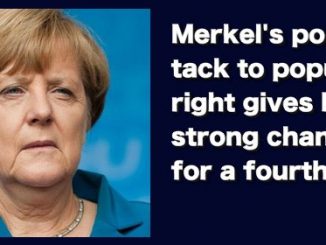