Israel plans to construct the world’s longest underwater gas pipeline together with Cyprus and Greece to carry Eastern Mediterranean gas onto Italy and the EU southern states. US Secretary of State Mike Pompeo has just endorsed the project. It will run smack up against a competing Turkish-Russian gas pipeline, Turk Stream, against a potential Qatari-Iran-Syria pipeline, as well as de facto undercut the Washington attempt to get more US LNG gas to the EU to reduce Russian dependency. The project, under discussion for several years since Israel discovered major gas reserves in the offshore Leviathan Field, is known as the East Med Pipeline Project. Natural gas will flow from Leviathan via Cyprus, Crete and Greece to reach its terminal at Otranto on the southeast heel of Italy. Plans call for a pipeline of 2,100 kilometers running three kilometers deep under the Mediterranean. Cost is estimated at $7 billion with a five year construction period.

The East Med is part of a complex of new geopolitical fault lines across the entire Middle East. Notable is the fact that the Gulf Arab Emirate, UAE, has already invested $100 million in a project the Jerusalem Post calls “a covert cornerstone underpinning the change in relationship between parts of the Arab world and the Jewish State.” This would seem to be a reference to the 2017 proposal of the US to create an “Arab NATO” with Saudi Arabia and other Gulf Arab states, backed by Israeli intelligence input, to counter the influence of Iran in the region. Little is said today about any Arab NATO, but ties between Netanyahu’s Israel and key Sunni Muslim Arab countries remain strong. 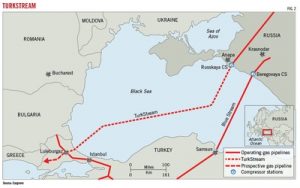 in the Greek EU part of Cyprus. In recent months Erdogan has moved Turkey closer to Iran and especially Qatar, home to key figures in the Muslim Brotherhood, as tensions with Saudi Arabia and Israel increase. The Sunni vs Shi’ite conflict seems to take a back seat to geopolitical power and control of pipelines.

In summer 2017 there was a dramatic split among Gulf Arab countries with Saudi Arabia declaring an embargo against Qatar for its “support of terrorism.” In reality, the move was aimed at cutting growing back-channel talks between Qatar and Iran, both of whom share the world’s largest natural gas field in the Persian Gulf. The Qatari section is called North Field and its LNG is said to be the world’s cheapest to extract, making Qatar in recent years the largest LNG exporter. The adjoining Iran section is called South Pars.

After spending a reported $3 billion financing anti-Assad and anti-Iran terrorist groups in Syria, in a futile attempt to get a pipeline through Syria to Turkey and on to the huge EU gas market, it seems that the shifty Qataris at some point, after Russia’s decisive entry into the Syria war in late 2015, realized it might gain more by shifting sides and covertly working with Iran and Assad and Erdogan to bring both Qatari and Iran gas to market. That was the real reason for the sharp break between Qatar and the Saudis. Notable is the fact that both Iran and Turkey came to the aid of Qatar when the Saudis tried to embargo them into submission.

Adding to the geopolitical cocktail of competing interests, the Black Sea sections of the Russia-Turkey gas pipeline were completed at the end of 2018 with full operation to begin later in 2019, offering 31.5 billion cubic meters of gas annually – half, some 16 bcm, available for the EU markets. Turk Stream, as does North Stream, allows Russian gas to the EU independent of politically hostile Ukraine pipeline routes. From the Kiyikoy terminal in Turkey, the Russian gas can go either to EU member Bulgaria or Greece or both.

Non-EU member Serbia has just begun construction of its section of the TurkStream pipeline to carry Russian natural gas to Europe. Serb Foreign Minister Ivica Dacic recently in Moscow said Serbia’s plans for the construction of the gas conduit did not hinge on Bulgaria’s own work. TurkStream will carry Russian gas through Bulgaria, Serbia and Hungary. Brussels is not overjoyed.

Now comes Israel into play, in a closer friendship with Saudi Arabia and the UAE, backed by Washington, with financing also from a French company, IGI Poseidon, a subsidiary of Edison, offering another rival option to Qatar and Iran and Turkey, as well as to Russia. Turkey is threatening to drill for oil and gas in the Turkish part of Cyprus while Lebanon disputes the offshore claims of Israel’s pipeline to Cyprus. And ExxonMobil just announced a major gas discovery in the offshore Cyprus waters disputed between Turkey and Greek or EU Cyprus.

It doesn’t need a crystal ball to see that future geopolitical energy conflicts in the Eastern Mediterranean are being pre-programmed. Watch this space…

How Zionist is the New World Order? 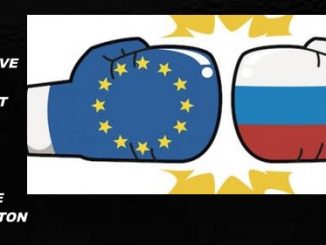 EU Foreign Policy Toward Russia Still ‘Fully Dependent on the US’