Israel is fortunate that its key partners are impervious to such embarrassing squabbles.

Emanuele Giaufret, the European Union’s ambassador in Tel Aviv, is among those partners. He keeps himself busy by backslapping Israeli recipients of EU science grants.

During a recent reception, Giaufret praised Israeli firms and institutions for their “amazing ideas.” He promoted, too, a short film on “collaborative projects” between the EU and Israel. 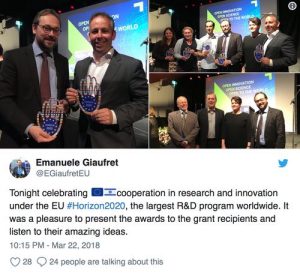 The film features a representative of Israel Aerospace Industries.

Viewers are not told that Israel Aerospace Industries is a weapons maker. Rather, they are informed that the firm is developing the aircraft of the future.

Israel Aerospace Industries – a state-owned enterprise – has manufactured the Heron drone, which has been used in attacks on Gaza.

The company appears to regard that as a selling point. Brochures for the Heron describe it as “combat proven.”

Bureaucrats in Brussels have not been perturbed by that creepy euphemism. They have approved the participation of Israel Aerospace Industries in Horizon 2020, the EU’s latest research program.

At least one of the grants which the firm has received through that program is for work focused on drone technology.

Other grants are for research on engines and on making planes and helicopters lighter.

The EU’s scientific activities are supposed to be civilian. Yet EU representatives have previously conceded there is nothing to stop the fruits of the research they oversee from being used for other purposes.

That indicates the EU is helping Israel to manufacture more lethal arms than it now possesses.

Israel Aerospace Industries is not a small mom-and-pop firm that needs a dig out from the EU taxpayer. At the end of last year, it had an orders backlog worth more than $11 billion.

One of Israel Aerospace Industries’ most profitable divisions is called Elta Systems.

That firm was recently picked by the Trump administration to build a prototype for the planned wall along the US border with Mexico.

Radar systems developed by Elta got what arms traders call their operational debut during Israel’s 2014 attack on Gaza. The radars apparently allow multiple targets to be identified simultaneously.

As the 2014 attack caused massive death and destruction to civilians and civilian infrastructure, that means Elta made a significant contribution to Israel’s crimes against humanity.

That has not prevented the European Union from awarding Elta a number of science grants.

Israel is adept at accessing EU funds. It has already drawn down more than $530 million from Horizon 2020.

As that seven-year program runs until the end of the decade, the final figure for how much Israel receives will inevitably be far higher.

The EU’s diplomats have dodged some vital issues: The “amazing ideas” that excite Emanuele Giaufret are often shaped or influenced by the Israeli military.

Mellanox, for example, is a lucrative business dedicated to accelerating the transfer of data via the Internet.

Its CEO Eyal Waldman has bragged about his term serving in the “elite” Golani Brigade – a unit of the Israeli military. His training with that brigade enables his firm “to kill with one bullet instead of five or 100 like our competitors,” he has said.

That he was speaking figuratively does not alter how Israel has turned its occupation of the West Bank and Gaza – an occupation in which the Golani Brigade has played a prominent role – to its competitive advantage.

A thriving technology sector has been built up largely because the occupation affords many opportunities for testing innovations.

By handing out subsidies to firms like Mellanox, the EU is encouraging Israeli militarism.

Other participants in Horizon 2020 have the Israeli military on their client lists. They include IsraTeam, a consultancy involved in an EU-financed project for research on “terrorism” and organized crime.

Israel uses “terrorism” as an all-encompassing term for resistance to its oppressive behavior. By doing so, it can get away with grotesque human rights abuses, including the routine use of torture.

The suppliers of weapons and services to Israel’s military are conducting cruel experiments against Palestinians.

Inviting those suppliers into its science programs is a major way that the EU connives with cruelty.

What Will The Trump Administration Do When Iraq Asks U.S. Troops To Leave?

To Think Outside the Box, It Helps First to Actually Understand What’s IN It