The Duran’s Alex Christoforou and Editor-in-Chief Alexander Mercouris discuss the recent elections in Spain where Pedro Sánchez of the Socialist Party (PSOE) has decided to agree on a coalition government with the anti-austerity Unidas Podemos, in an effort to prevent the rising Vox Party from forming a right, populist government.

Vox was the big winner of the elections in Spain, growing to become the third strongest party in Spain’s Congress.

At that point, the repeat election of November 10 had given him a victory with 120 seats in the 350-strong lower house of parliament, but nowhere near enough for a governing majority.

Instead of gaining strength as Sánchez had mistakenly anticipated, the PSOE lost three seats from the previous election of April 28. And the far-right party Vox surged to become the third-largest force in Congress with 52 representatives.

And so a deal that had seemed impossible for all of six months suddenly became a reality in a one-hour meeting at La Moncloa, the seat of government. On Tuesday Sánchez and Unidas Podemos leader Pablo Iglesias signed a preliminary agreement and embraced in front of the cameras.

But the combination of PSOE and Unidas Podemos only yields 155 seats, well short of the 176 required for a parliamentary majority. Both parties lost a collective 1.5 million votes from the April election, representing 10 seats in Congress. In order to form a government, Sánchez and Iglesias will need endorsement from other parties, and almost certainly an abstention at the investiture vote by the separatist party Catalan Republican Left (ERC).

This could prove tricky after Sánchez adopted a tougher tone on Catalonia in the final days of campaigning in a bid to attract undecided voters in the political center.

In fact, forming a government in the current scenario of political fragmentation will be harder than ever. If ERC refuses to abstain and the center-right Ciudadanos, which suffered a crushing defeat on Sunday, continues to vote against Sánchez, the latter will fail to get himself returned to office, and Spain could be facing yet another repeat election.

As he followed the vote count from his fourth-floor office at party headquarters on Ferraz street in Madrid, an exhausted Sánchez figured that he had to close a fast-track deal with Podemos’ Pablo Iglesias.

Iglesias had lobbied hard for such a coalition following the April election, but Sánchez had rejected his conditions. The Podemos leader had in turn spurned the PM’s alternative offer of a few positions below the Cabinet level.

But on Sunday night, Sánchez saw that the option he had earlier rejected was now the only way out of the impasse. “A politician’s best diet is to eat his own words,” said former Spanish PM Mariano Rajoy a month ago, paraphrasing Winston Churchill and possibly anticipating what was about to unfold in Spain.

As he contemplated the fiasco of the repeat election – the fourth in four years – Sánchez made a U-turn and decided to accept a coalition government with Unidas Podemos in which Pablo Iglesias would be one of his top deputies.

The deal is not complete yet, but sources familiar with the negotiation said it will be similar to the one that both leaders nearly clinched in July, giving Unidas Podemos one deputy PM position and three ministerial portfolios.

Following the preliminary agreement by Sánchez and Iglesias, two top aides – Adriana Lastra for the PSOE and Irene Montero for Unidas Podemos – began working on the details of a set of guidelines for a four-year governing program.

The issue of Catalonia, which had seemed like an insurmountable obstacle between both parties, was quickly resolved with a preliminary agreement that talks about finding “formulas for mutual understanding and common ground” and seeking solutions to the territorial crisis “within the bounds of the Constitution.” Unidas Podemos had earlier defended the idea of a legal independence referendum for the region, which the PSOE rejected as unconstitutional.

Both men are aware that they need to work together or there will be no government in Spain, and they know that another repeat election could make the political right even stronger.

If the plan secures parliamentary endorsement, this will be Spain’s first left-wing coalition since the days of the Second Republic, which lasted from 1931 to 1939, when the end of the Spanish Civil War gave way to the Franco dictatorship. 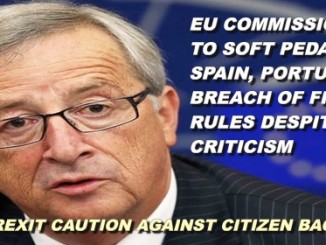 As the migrant dispute heats up, where is Angela Merkel? (Video)

More on Poland and the EU: Who’s In the Stronger Position? [VIDEO]