ER Editor: We also recommend this piece by the Washington Post titled Prominent French journalist summoned by police for reporting on corruption in Macron’s government. Of note:

Chemin is accused of “committing or attempting to commit the offense of revealing or disclosing, by any means, any information that could lead, directly or indirectly, to the identification of a person as a member of special forces,” according to a copy of the police summons shared with The Washington Post. The document also notes that if charged and convicted, she could face jail time.

The charges stem from an April 2016 law passed under the “state of emergency” that was enacted in the aftermath of the terrorist attacks that devastated France the year before. Chemin’s case marks the first time this specific provision has been used to target a journalist.

“It’s a very bad climate for the press,” Chemin said in an interview, noting that she has worked as a journalist since 1995. “This is the first time that the press is being treated in such a way.”

A Le Monde journalist has refused to reveal her sources during an interrogation by French domestic intelligence over stories she wrote exposing alleged corruption and cronyism in President Emmanuel Macron’s inner circle.
.

“They asked me many questions on the manner in which I checked my information, which was an indirect way of asking me about my sources,” Ariane Chemin (see featured image) told AFP, adding that she declined to answer the implied question: “I explained that I only did my job as a journalist.”

Chemin was questioned by the General Directorate for Internal Security (DGSI) for 45 minutes on Wednesday in the presence of her lawyer, a week after she became the fifth journalist summoned to appear before the agency in what has become a disturbing new pattern of journalistic intimidation by Macron’s government.

Her reporting on the “Benalla affair,” a scandal that erupted after one of Macron’s bodyguards was filmed 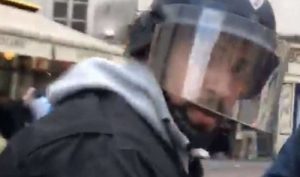 beating a protester while dressed as a policeman (pictured), contributed to the resignation of several government officials. The DGSI were most interested in articles concerning former air force officer Chokri Wakrim, whose wife ran security for the prime minister’s office; she was forced to resign after Le Monde exposed that the couple had welcomed the disgraced Benalla into their home.

“Everything is done to make it intimidating,” Le Monde managing director Louis Dreyfus (see featured image) wrote in an editorial describing his own DGSI interrogation on Wednesday. “I explained that I never read the articles before they were published, and that I was not meant to do so. And they kept telling me that the offense was punishable by five years in prison and a fine of €75,000.” He was summoned the same day as Chemin.

Earlier this month, the DGSI interrogated four journalists from investigative news website Disclose, threatening them with a five-year prison sentence under a 2009 law prohibiting “attacks on national defense secrets” after they published a story based on a classified document that suggested the French government was knowingly violating a 2014 arms treaty by selling offensive weapons to Saudi Arabia and the United Arab Emirates for the purposes of waging war in Yemen.

Macron has cracked down hard on journalists critical of his administration and policies. In February, police raided the offices of Mediapart, another outlet which reported on the Benalla affair, without a warrant. Last year, a law was passed to allow the government to shut down any news agency four months before an election, so long as it could be deemed “under foreign influence.”