ER Editor: Alexander Dugin is a Russian philosopher and political commentator of a nationalist bent, opposed to the globalist liberal, unipolar world order, and may be found at Geopolitika.ru

See this by TASS (browsers will translate): What is known about the death of the daughter of Alexander Dugin

See also this by Readovka (ditto): The case of the murder of Daria Dugina was transferred to the central office of the Investigative Committee

#RUSSIA: Car bomb assassination in #Moscow. Alexander Dugin’s daughter Darya is dead. #Dugin was on location and the likely target. He calls for a totalitarian Russian Empire to control the Eurasian continent from Dublin to Vladivostok to challenge America and “Atlanticism”. pic.twitter.com/n7h0Nh8wfX

Update (2310ET): Russia’s English language state RT News is confirming the death of Darya Dugina, the daughter of veteran Russian political commentator and Putin ally Alexander Dugin, in what appears to have been a targeted hit – possibly an attempt on her father Alexander’s life. RT however is still calling the reports “preliminary” until government authorities confirm the identity of the deceased.

“The incident took place on a highway some 20 kilometers west of Moscow around 21:35 local time, with witnesses saying that the blast rocked the vehicle right in the middle of the road, scattering debris all around,” according to new details in RT. “The crippled car, fully engulfed in flames, then crashed into a fence, according to photos and videos from the scene.”

“Emergency services said one person was inside the car and was instantly killed by the blast and crash – a female whose body was reportedly recovered burned beyond recognition.”

RT writes further: “Authorities have yet to confirm the identity of the victim, but multiple Russian Telegram channels and media sources reported that the victim was 30-year-old Darya Dugina (Platonova). Her father, Alexander Dugin, was spotted at the scene soon after the incident, visibly shocked, according to several videos circulating on social media.”

While an official cause of the blast hasn’t been identified as yet, there’s widespread speculation it was an Improvised Explosive Device (IED).

Reports say the daughter of Aleksandr Dugin—the man nicknamed “Putin’s brain” who was behind the annexation of Crimea and the invasion of Ukraine—was killed in a car explosion in Moscow tonight.pic.twitter.com/9iLS21OLZ6

Video purportedly shows Aleksandr Dugin at the scene of the blast. He was allegedly supposed to be in the vehicle but ended up taking another car: pic.twitter.com/sgRcJ8laqJ

There’s also much speculation centered on the apparent bombing being a likely attempt on Alexander Dugin, with unconfirmed reports saying she had been driving his car and he was in another vehicle.

Today, the Head of the Presidential Administration in Ukraine, Andrey Yermak, said that, “Our task is to make sure that not only the current generation of Russians, but their children and grandchildren will pay”. Eight hours later, Alexander Dugin’s daughter Darya was killed. pic.twitter.com/tSNhsxTR7A

According to The Daily Beast, citing local reports:

Alexander Dugin was meant to be in the vehicle his daughter was driving but had gotten in a different one at the last second, according to Pyotr Lundstrem, a Russian violinist quoted by the outlet.

Dugin had reportedly been following right behind his daughter and had watched as her car exploded. Photos shared by Baza appeared to show Dugin distraught at the scene, holding his head in both hands as he stood in front of the fiery wreckage.

Denis Pushilin, the Russian proxy leader of Ukraine’s occupied Donetsk, angrily blamed “terrorists of the Ukrainian regime” for the blast, writing on Telegram that they had been “trying to liquidate Alexander Dugin” but “blew up his daughter.”

“In loving memory of Darya, she is a true Russian girl,” Pushilin wrote.

This, along with recent attacks inside Crimea, could indeed mean greater escalation in the Ukraine war.

The daughter of Alexander Dugin – a close ally and adviser to Russian President Vladimir Putin – has reportedly been killed in what many are assuming was an assassination attempt meant for her father.

Darya Dugin was ‘blown to pieces’ near Moscow suburb of Bolshiye Vyazyomy, according to reports, which say that Alexander had originally planned to travel back with her from a festival before deciding to ride in a separate car, according to the Daily Mail and other outlets.

Wow, Alexander Dugin’s daughter Darya has reportedly been killed in a car explosion. Her Land Cruiser Prado exploded near the village of Bolshiye Vyazyomy. According to preliminary reports, she died on the spot. pic.twitter.com/2dKOMtveIv

According to Russian’s state-owned TASS, local law enforcement confirmed that a Toyota Land Cruiser Prado had blown up, but did not confirm the victim’s identity – only that it was a female. A man identified by TASS as a Dugin associate said it was Darya, but there has been thus far no official confirmation.

Russian outlet Baza reports that the 29-year-old had been returning home from “Tradition” – a literature and music festival, when the blast occurred. She was reportedly driving for around 10 minutes before the detonation. The outlet also quoted Russian violinist Pyotr Lundstrem, who (and how would he know?) that Alexander was meant to be in the vehicle. Instead, he was reportedly following her car when it exploded.

Dugin is the former chief editor of the pro-Putin Tsargrad TV network, and has been often portrayed in Western media as being a ‘mastermind’ of the Ukraine invasion, as well as an intellectual / philosopher who’s had a large influence in Russia’s post-Soviet nationalism.

In an Instagram post, Denis Pushilin, head of the Donetsk People’s Republic in eastern Ukraine, called it an ‘attack’ by ‘vile villains,’ adding “The terrorists of the Ukrainian regime, trying to eliminate Alexander Dugin, blew up his daughter… In a car. Blessed memory of Daria, she is a real Russian girl!”

“The tenacity of these Ukro-Reich morons is amazing. Everyone, if possible, needs to be home in the next hour,” he added.

An alleged photo of the scene was posted to Telegram by “MOW!” Moscow News, with the caption (translated): “All that remains of the blown up car of the daughter of the famous public figure Alexander Dugin on the Mozhaisk highway in the Moscow region. The SUV of Darya Dugina detonated while driving, after which it caught fire.”

Check back for updates… 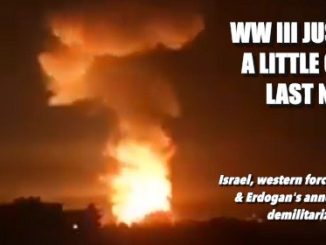 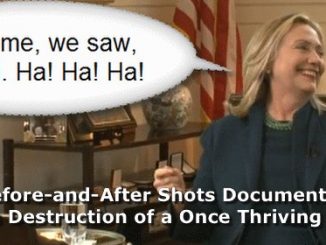 Libya “Before And After” Photos Go Viral