TLB Editors note: This is how MS Media writers cover the subject of GeoEngineering… with phrases like,  “conspiracy theorists” and “allegations” even though the evidence is clear. It is the way MS minimizes and demonizes the story. It is right out of the CIA “play book” for Media dating back to the Conspiracy and the killing of JFK.

Soon after martial arts legend and Hollywood film star Chuck Norris, 76, came out as a chemtrail conspiracy theory believer and accused the authorities of secretly spraying chemicals on unsuspecting masses as part of alleged global geoengineering efforts to limit the impact of climate change, there has been increased focus on time lapse videos uploaded online as proof of the so-called chemtrail conspiracy theory.

According to conspiracy theorists, evidence supporting allegations of chemtrails spraying comes from time-lapse videos that demonstrate convincingly the claim that there are two types of contrails being left in the atmosphere by aircraft.

The first type of contrail, which is harmless, consists of condensation or vapor trails produced through the exhaust of aircraft flying at high altitudes. According to aviation experts, contrails contain mostly water vapor. The water vapor, combined with low ambient temperatures at high altitudes, generate the normal and harmless aircraft contrails.

Conspiracy theorists call such long-lasting contrails chemtrails because they are believed to contain chemical and biological toxins sprayed deliberately without the knowledge or consent of the general public.

According to conspiracy theorists — including Chuck Norris — governments spray chemtrails to mitigate climate change, and there are two major approaches to climate engineering or geoengineering

The second method, called solar radiation management (SRM), attempts to counter the effect of greenhouse gasses such as carbon dioxide, through measures that reduce the ability of the atmosphere to absorb solar radiation.

One favored method attempts to deflect sunlight away from the Earth by spraying aerosols that form artificial clouds and block sunlight. It is claimed that scientists have conducted experiments to simulate the temperature lowering effect of aerosols released into the air by volcanic eruptions. This involves spraying sulfide gases into the air which form artificial clouds that block sunlight.

Time-lapse videos (see above) that conspiracy theorists tout as “proof” of the chemtrail conspiracy theory are based on the principle that normal contrails dissipate rapidly while chemtrails last longer in the atmosphere and spread slowly to form artificial clouds for SRM purposes.

The videos show chemtrails lingering in the air, dispersing gradually and merging with the clouds. According to chemtrail conspiracy theorists the only logical explanation of the behavior of long-lasting contrails is that they contain other chemicals mixed with jet fuel.

A chemtrail conspiracy theorist who recently uploaded a time lapse video that allegedly proves chemtrails spraying writes that he stumbled upon the evidence when he noticed that contrails left behind by an aircraft failed to disperse normally.

“I looked out the window and noticed a trail from an aircraft. A few minutes later, instead of disappearing, it had got lower and bigger,” he writes.

In addition to geoengineering with the purpose of mitigating the effects of climate change, conspiracy theorists also allege that governments spray harmful biological and chemical agents in the atmosphere as part of an evil and sinister mind control program.

The Inquisitr reported late last month on claims that emerged online that a recorded phone conversation between a woman and a NASA scientist proves that NASA has been dumping lithium, used as a powerful anti-psychotic drug, in the upper atmosphere to make Americans “docile, tractable, and amenable to government propaganda and control.”

Conspiracy theorists also accuse the authorities of spraying aluminum in the atmosphere, a substance that has reportedly been linked with increased incidence of Alzheimer’s and dementia.

Focus on chemtrails time-lapse videos come after Chuck Norris published a statement claiming there is evidence from reliable sources to prove that governments are involved in a secret global geoengineering program. He claimed there is evidence that governments are conducting covert weather modification experiments that could go wrong and could have a devastating impact on the environment.

He also warned of the long-term consequences if people continue ignoring the warnings and refuse to take action despite the overwhelming evidence for scientific sources that governments are spraying toxic chemicals in the atmosphere.

Describing the authorities as “sky criminals,” he cited a paper published in 2003 by the National Center for Biotechnology Information which concluded that “aerosol immunization seems a promising method of vaccination,” as circumstantial evidence that the authorities may have been spraying aerosol vaccines on the populace secretly.

“Over the past 13 years since the study, does anyone think it’s possible that such mass vaccinations or immunizations have occurred by air in trial locations in the U.S.?” Norris asked. “How many plane-dropping chemical cocktails have already been sprayed around the world in the name of securing public health?”

“Whatever the intent or justification, and whether or not the purpose is for mass vaccinations or some other devious plot,” Norris wrote, “if you don’t believe there’s some smoke-screening in the sky trails above you, I have a London Bridge to sell you in Lake Havasu City, Arizona.”

Norris also claimed he has witnessed chemtrails spraying over his Texas ranch and accused the authorities of censoring studies that show the harmful effects of geoengineering.

He cited a study by Dr. J. Marvin Herndon, titled, “Evidence of Coal-Fly-Ash Toxic Chemical Geoengineering in the Troposphere: Consequences for Public Health,” and claimed that the study was retracted on grounds that “The language of the paper is often not sufficiently scientifically objective for a research article.”

“It’s time again to wake up, America. I’m not Shakespeare, but something is definitely rotten in the state of Denmark,” Norris concluded.

The Liberty Beacon recommends you visit Pam Jones on her Activist Blog by Clicking Here.

TLB has other above the fold articles, videos and stories available by clicking on “HOME” at the top of this post. Never miss a new post, sign up for E-Mail alerts at the bottom of the Home page and get a link dropped right to your in-box.

We’re All Enemies Of The State: Draconian Laws, Precrime & The Surveillance State

Climate Disruption: It’s Not Due to CO2 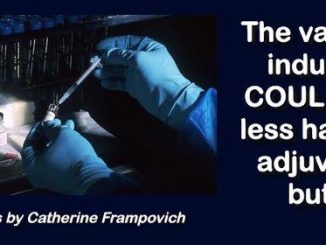 Once Upon A Time There Were Aluminum-free Adjuvant Vaccines, So What Happened?