Holy Hormones Journal: Why is there such a demand for surgery? The doctor in the article is baffled – however, she must not be aware of the conference on the secrets of the female body. What you say? I wrote about this in my blog entitled “Vatican and Vaginas,”in December of last year based on an article that appeared in MailOnline.

Secrets of the G-spot unravelled… by the Vatican: Catholic university overseen by the Church to host conference about the secrets of the female body

The secrets of the female body do not belong in the hands of aesthetic gynecologists – nor do they belong in the church. The field of medicine and the church have both denigrated, burned, and have destroyed women for thousands of years… now they want to uncover the secrets of the female body? Women have their breasts augmented, or cut off, uterus taken out – hormones suppressed with synthetic hormones and now we are going to have our vulva’s sculpted?

Are our daughter’s begin placed on a pedestal of perversion?

New York Times
By Roni Caryn Rabin
April 25, 2016
Fat thighs. Hairy arms. Muffin tops. Breasts that are too big or not big enough. To the long list of body parts that adolescent girls worry about and want to tinker with, the Internet age has added a new one: the vulva.

So many teenagers are seeking cosmetic surgery to trim or shape the external genitalia that the American College of Obstetricians and Gynecologists issued guidance from its Committee on Adolescent Health Care to doctors last week, urging them to teach and to reassure patients, suggest alternatives to surgery that may alleviate discomfort, and screen them for a psychiatric disorder that causes obsession about perceived physical defects.

As for why there has been an increase in demand for the surgery among teenagers, physicians are “sort of baffled,” said Dr. Julie Strickland, the chairwoman of A.C.O.G.’s committee on adolescent health care.

For adults, the procedure is marketed as “vaginal rejuvenation,” tightening the inner and outer muscles of the vagina, as well as often shaping the labia; it is geared to older women and women who have given birth. But gynecologists who care for teenage girls say they receive requests every week from patients who want surgery to trim their labia minora, mostly for cosmetic reasons, but occasionally for functional reasons, such as to relieve discomfort.

The guideline does not rule out surgery on the labia, or labiaplasty for teens, but says it is rarely appropriate. “It should not be entertained until growth and development is complete,” Dr. Strickland said.

“The big thing I tell patients about labiaplasty is that there are a lot of unknowns,” she said. “The labia have a lot of nerve endings in them, so there could be diminishment of sexual sensation after surgery, or numbness, or pain, or scarring.”

A 2007 A.C.O.G. committee opinion on cosmetic vaginal procedures for adults, which was reaffirmed in 2014, said the procedures were not medically indicated, had not been proved safe or effective, and could cause serious complications.

The American Society for Aesthetic Plastic Surgery says that 400 girls 18 and younger had labiaplasty last year, an 80 percent increase from the 222 girls who had cosmetic genital surgery in 2014. While the overall numbers remain small, the data probably understates the trend because it does not include procedures performed by gynecologists. A 2013 British report found the number of labial reductions on girls and women done by the National Health Service had increased five-fold over 10 years.

Author, publisher, radio talk show host and internationally recognized expert on women’s hormone cycles. Social/political activist on Gardasil the HPV vaccine for adolescent girls. Co-author of “Understanding Your Mood, Mind and Hormone Cycle.” Honorary advisory board member for the Foundation for the Study of Cycles and member of the Society for Menstrual Cycle Research.

Bootleggers and Catholics: The Politics of the Open-Borders Lobby 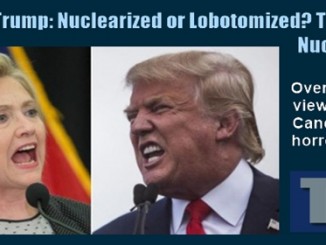 Clinton & Trump: Nuclearized or Lobotomized? The Road to Nuclear War?