False Flag Weekly News embedded above! Watch REAL news media (as opposed to the fake news MSM) cover this and all the other biggest stories of the week, featuring special guest Vinnie Eastwood. Click HERE for the list of stories we covered.

The mainstream media (MSM) are refusing to report Amazon.com’s recent burning, shredding, and suppressing of at least 147 scientific and historical books. Most, though not all, of the suppressed titles involve what is loosely termed “holocaust revisionism.”

This is outrageous, un-American suppression of freedom of speech and freedom of the press. Yet the NY Times, Washington Post, CNN, ABC, CBS, NBC, PBS, and all the rest of the supposed “free press” won’t even report it, much less protest.

The MSM has been complaining about Trump’s supposed contempt for freedom of the press. If they want our sympathy, they should stand in solidarity with small publishers whose businesses have been destroyed by Amazon’s book-burning frenzy. Otherwise, all Americans of good will are going to have to agree with Trump that the MSM are the “enemies of the American people.”

If Trump and Steve Bannon ever decide to send thugs in jackboots into corporate mainstream media offices (including Amazon offices, where Bezos and his Washington Post front for the CIA) to eject or imprison those “enemies of the American people,” many of us who would otherwise have defended the media, had it been remotely doing its job, are going to feel ambivalent, to put it mildly. The ongoing media coverup of all of the worst aspects of US Deep State corruption — 9/11 and other false flags, political assassinations, the pedophile elite, wars for Israel, and so on — has led many people of good will to feel even more contempt for the MSM than Trump does.

And now, the MSM’s silence in the face of Amazon’s latest atrocity is the last straw.

This is not a matter of “suppressing hatred.” It is a manner of maintaining officially-mandated hatred (of Germans, primarily; and by extension, of anyone Zionist Jews don’t like, such as Arabs, Muslims, and Palestinians). 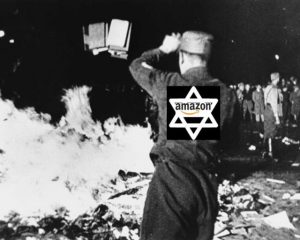 Interviewed on Truth Jihad Radio last night, leading revisionist publisher Germar Rudolf explained that virtually all of Castle Hill Publishers’ 68 books banned by Amazon on March 6th are dispassionate scientific and historical treatises. They feature no incitements to hatred, nor any derogatory language toward any racial, ethnic, or religious groups.

So why were they banned?

“Just over two years ago, in December 2014, we had our first collision with Amazon. At that time a new book came out by the Swiss-British Jew Gerard Menuhin, Tell the Truth and Shame the Devil, published by the Barnes Review. They were looking for a (distribution) partner in the UK. My company, Castle Hill Publishers, took it on.

“It was the perfect moment for such a book to become successful…on the topic of Jewish power and influence, and the manipulation of the holocaust narrative to protect themselves from criticism. Because it was written by a person of Jewish descent, people take him seriously. When a ‘goy’ writes a book like this, and there are dozens out there, nobody takes them seriously, because people have a psychological twist in their minds that criticism of Jews has to come from Jews, otherwise it’s the third rail, you can’t touch it.

“Sales (of Tell the Truth and Shame the Devil) were going through the roof. It was Christmas season; that’s when people buy presents. Orders were coming in so fast that we had problems fulfilling, we had problems getting the books. Sales were going exponentially up. And Amazon has a policy that if you don’t fulfill your order within a certain time frame, you can get in trouble. So we got in trouble, and they pulled the plug on us. But the kind of trouble we were in is not a reason to cancel an account. And they refused to reinstate us. The same thing happened to Barnes Review, even though they were not in violation of anything, they had no fulfillment issues. So it wasn’t about fulfillment, it was the result of a massive complaint coming from certain quarters that didn’t like this book being successful.

“So then we shifted to printers who work directly with Amazon, and expanded our offerings. At the end of last year we had some 100 titles listed, almost all of them highly controversial. And soon we were observing sales statistics with some of these books that were similar to comparable books representing orthodoxy. Sometimes ours were selling better than those of the orthodoxy. And that development was prevalent since last summer and early fall. I was observing that we were catching up and overtaking the sales of the other side.

“Well, the Jewish lobby can read those statistics too. It is a matter of cultural hegemony. This topic is extremely crucial for their cultural hegemony: Put a guilt trip on everyone because of the poor Jews being exterminated, and the threat of them being exterminated again. They can manipulate everyone, including their own people: Jews are being educated to be paranoid against non-Jews, to keep the sheep in the flock. So they use it for both sides. So these (sales statistics) showed there was a paradigm shift, a cultural threat, and if they let it happen it would strike at the very core of their hegemony. And so something was bound to happen.

“The first case of them screaming bloody murder came in Australia, where our sales were first overtaking those of the other side. Then starting in fall last year, the Guardian and others were saying this (success of holocaust revisionist books) was scandalous.

“Then we had, here in the US, the case of (Jewish) cemetery vandalism, which I think kick-started the whole thing…whether it was a false flag or a real event still needs to be investigated.

“Then you see Yad Vashem saying Amazon really should pull those books, because in this atmosphere, anything has to be done to combat anti-Semitism. And again, they quoted irrelevant books; they never really named any of the things that were targeted (to avoid giving them publicity). And that was in early March. Then we had the ‘incident’ in New York that wasn’t an incident; it was basically just a neglected cemetery. Things had crumbled over the years, and nobody cared. But  in the current atmosphere of paranoia, they screamed bloody murder and used it to twist some more arms. And then Amazon pulled the plug.

“I got a notification on Amazon Kindle, the ebook branch, that has almost a monopoly, that a huge list of 70 titles had been pulled, and if I ever tried to post anything similar to that content again, I face penalties up to termination of my account.”

Other publishers have also had their books suppressed. The total number of banned books is heading into the hundreds.

As I recently wrote in an article for American Free Press:

I spent the first half of my adult life teaching critical thinking at American colleges and universities. I believed what I had been taught: that the American academy, and American culture in general, is based on free thinking and fearless debate. Unlike the Nazis, who publicly staged huge bonfires of forbidden books, we Americans believe that the best remedy for bad speech is not censorship, but more and better speech. If you don’t like a book — even if you find it profoundly offensive — don’t burn it! That simply lends it credibility. Instead, write a better book. Explain, using logic and evidence, why the book you hate is so wrong.

Why can’t the anti-revisionists do that? The two leading anti-revisionist texts, Lipstadt’s Denial and Shermer and Grobman’s Denying History, are grossly inadequate. Can’t someone write a better one? If not, and the book-burnings continue, the revisionists win the debate by default.

Here is the latest list of books banned by Amazon. The count is up to 147 titles, 72 current, 75 out-of-print.

Note that almost all books banned by Amazon last Monday, March 6, were also simultaneously banned by Barnes & Noble. They are supposed to be competitors, but when it comes to these things… 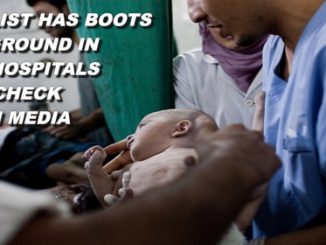 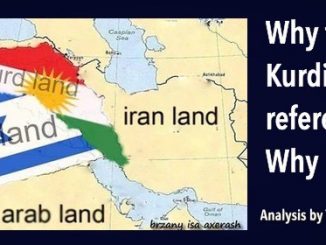 The US Couldn’t Break Syria With ISIS, So Now It Will Try With Kurdistan