In a style much like that of disinformation agents Michael Shermer, Jonathan Kay and David Aaronvitch, Chomsky casts a generalizing net of his own imagination over the diverse array of critics that skeptically interrogate officialdom’s specious account of 9/11. One of the most bizarre of Chomsky’s generalizations is that those who are skeptical of the official interpretation of 9/11 are united by a common delusion that we can become experts in physics and civil engineering on the basis of an hour on the Internet.

Chomsky’s “bizarre non-sequitur” on the Internet and 9/11 “truthers” is at odds with the characterization put forward by another avid defender of the official narrative of 9/11. Jonathan Hillel Kay’s proudly-proclaimed Jewish approach to interpreting 9/11 presents a reverse version of the negative spin that Noam Chomsky gives the Internet in relation to the 9/11 Truth Movement. Where Chomsky sees “truthers” as a human type prone to abuse the Internet in order to arrive at conclusions too quickly, Kay attacks the 9/11 Truth Movement by associating it with “Internet addiction.” Are Chomsky and Kay delivering talking points emanating from a common source that has identified the “Internet” as a hot button term useful in casting aspersions on those to be attacked?

Whatever the case, there is no denying that the age of the Internet has made it possible for diverse individuals to interact in new types of configuration in the digital commons. This change in our primary mode of communication is eroding many former monopolies of power. The citizens’ investigation of the events of September 11, 2001 forms a classic case in point. Since 2001 the Internet has become the primary medium of convergence of millions of people sharing a common interest in holding the real culprits of 9/11 accountable for their international crimes.

The rise of the 9/11 Truth Movement through digital communication forms a primary test of the implications of New Media in formulating twenty-first century public policy. When, if ever, will the weight of Internet disclosures swing the pendulum of power away from fable-based formulations towards evidence-based formulations of public policy on the big issues of war and peace, life and death? How much longer can the war footing of so many Western governments be maintained as millions of citizens become aware of the specious nature of justifications for military aggressions abroad, police state incursions at home? How much longer can the empire of illusion be maintained in an era of massive disclosures through Internet venues such as those through which Kevin Barrett spreads the fruits of his intellectual roots?

Kevin Barrett’s continuing career as a public intellectual would have been difficult to imagine without the Internet. Alternatively many of those that have lined up to insult Dr. Barrett’s work embody the old bastions of power that formerly operated through control of information. The mutual contempt of Jonathan Kay and Noam Chomsky for the intellectual work of Kevin Barrett forms a telling example of a convergence of hostility towards an individual whose career well illustrates the role of the Internet in breaking down old monopolies of academic and journalistic authority.

The concept of “Internet Addicts” comes up in the subtitle of Among the Truthers, Kay’s volume authored to commemorate the 10th anniversary of 9/11. By his own self-admission in a written communication to me, Kay is a notorious “poseur” who posed the part in this well-funded project as that of a sleuthing anthropologist turning up stones and slithering along murky caves in search of objects for his subterranean study. In the subtitle Kay advertises his text as A Journey into the Growing Conspiracist Underground of 9/11 Truthers, Birthers, Armageddonites, Vaccine Hysterics, Hollywood Know-Nothings, and Internet Addicts.

Although he would subsequently try to distance himself from the episode, I personally witnessed Jonathan Kay cite Noam Chomsky approvingly in Montreal in 2009. After Richard Gage’s talk on behalf of Architects and Engineers for 9/11 Truth, Kay publicly aligned himself with Chomsky’s hostility to the 9/11 Truth Movement. Kay’s work on Among the Truthers was supported by the Foundation for the Defense of Democracies, an entity that extended the author a fellowship. The FDD is a richly funded Zionist lobby and think tank created three days after 9/11. 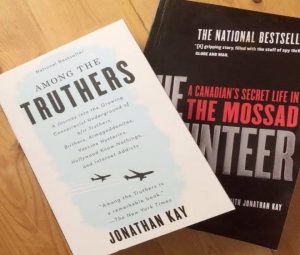 The FDD receives financial support from a number of Jewish family philanthropies. Many such estates are heavily committed to funding the various entities that work with the media such as the Rupert Murdoch Press, the BBC, the New York Times and the Postmedia newspaper chain in Canada to generate images and circulate stories meant to incite maximum fear and hate of Muslims.

With especially close connections to the New York Times, Rita Katz’s SITE Intelligence agency is an important Zionist entity at the strategic nexus between the media incitement of Islamophobia and the national security state’s Gladio-style engineering of false flag terrorism. The aim of this elaborate system of violence, publicity and deception is to shape public opinion in ways that facilitate Israel-directed war strategies through agencies that include NATO and the US Armed Forces.

‘Rita Katz’s SITE Intelligence agency is an important Zionist entity at the strategic nexus between the media incitement of Islamophobia and the national security state’s Gladio-style engineering of false flag terrorism.’

The influence in high places of the hate-inducing Islamophobia Industry is marked by the fact that there is a virtual absence of skeptical investigation and reporting in the mainstream media when it comes to events where police and government officials blame terror events on Islamic extremists. Reporters are reduced to the status of mere stenographers for police and other public officials. As we have seen, many in the foundation-funded “alternative media” follow suit, betraying their mandate to evaluate official pronouncements honestly and skeptically.

The engineering of false flag terrorist events and the media coverage of them are part of the same dark psychological operation. This psy-op brings together the likes of Noam Chomsky and Jonathan Kay, two public intellectuals seemingly at different poles of the political spectrum. Kay’s sponsor, the FDD, draws on much the same Zionist circles of interest as did the Project for the New American Century. A year before 9/11, PNAC’s Israeli-American brain trust notoriously observed that its agenda of rapid militarization of the US Armed Forces could not be quickly achieved “absent some catastrophic and catalyzing event – like a new Pearl Harbor.” [1]

Kay’s other book-length project is a mixture of fact and fiction co-authored with Michael Ross aka Michael Burrows. Ross worked with Jonathan Kay at the National Post doing stories including on the 9/11 research work of my former graduate student, Joshua Blakeney. The literary style of the book-length Kay-Ross collaboration marries snippets of truth with much fabrication, invention, exaggeration and adornment. The text provides something of a prototype to be replicated and adapted in the supposed news coverage of the Global War on Terror in its many incarnations.

Entitled The Volunteer: A Canadian’s Secret Life in the Mossad, the volume was written apparently with some authorization from the real Mossad. The text is written as Ross’ autobiography focusing on the years he is said to have spent as an agent in the Israeli secret service. Kay lends his literary skills to lionizing the Michael Ross character. Presented as a Jewish convert and Israeli patriot, Ross [Burrows] is said to have been born and raised an Anglican in Victoria BC. As depicted in The Volunteer, the Ross character is made to combine the suave knowhow of James Bond with the gutsy bravado of Rambo. The main part of the heavily contrived narrative of the good Canadian Mossad agent unfolds during the decade between the Cold War and the origination of the Global War on Terror in the misrepresented events of 9/11. 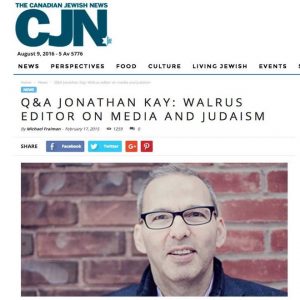 Kay’s embrace of Zionism is considerably less muted than Chomsky’s. The story co-authored by the Canadian journalist begins and ends with a plea to embrace Israel as the essential shield against “militant Islam,” as the necessary bulwark of the rule of law and of civilization itself. The co-authors proclaim, “Israel’s battle is everyone’s battle.” Thus “Jew and gentile alike” should be joined in “Israel’s cause” because the Jewish state presents “a microcosm of the civilized world’s struggle against a murderous ideology and the men who embrace it.” As Kay and his real or imagined Mossad colleague would have it, the events of 9/11 demonstrate that we are “in a high stakes war that pits civilization against a fascistic death cult.” [1]

In Among The Truthers Kay repeats the core idea of The Volunteer. As Kay would have it, 9/11 confirms the role of Israel as the West’s primary bulwark against Islamic savagery. In making this case Kay repeats the assertion of Benjamin Netanyahu that 9/11 was good for Israel. Kay asserts, “Following the attacks supporters of Israel spoke of a silver lining. The war against militant Islam suddenly was a global one. Now the whole world would see and understand the sort of nihilistic hatred that Israelis confront every day.” As Kay sees it, Jews are being enlisted en masse to serve as primary soldiers in a war of civilizations. He writes, “The Jew was the perfect anti-Islamist, whose zeal and reliability was hard-wired into his political DNA thanks to six decades of Israeli warfare against Islamic terrorists in the Middle East.” [3]

You will read “Jonathan Kay and the Israel First Movement” in the next part.

[2] Michael Ross with Jonathan Kay, The Volunteer: A Canadian’s Secret Life in the Mossad (Toronto: McClelland and Stewart, 2007), p.x-xi, 272

Michael Ross, “The Many Scandals of the Prisoner X Affair,” The Daily Beast, February 21, 2013m at 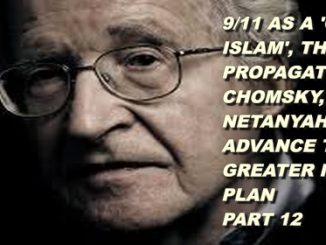 9/11 and the Zionist Question: Is Noam Chomsky a Disinfo Agent for Israel? – Part 12 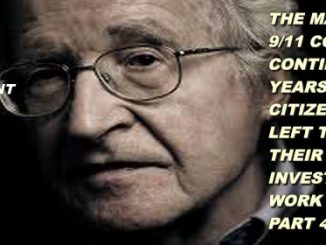 9/11 and the Zionist Question: Is Noam Chomsky a Disinfo Agent for Israel? Part 4

Your Man in the Public Gallery: Assange Hearing Day 21, Sept 30