Looking back with hindsight fifteen years after the transformative events of September 11, 2001, the quality of life for most people has significantly declined since 9/11. Beginning immediately on the very day of infamy, the forces of authoritarian reaction began to ramp up the power of unbridled militarism abroad and greatly expanded police powers at home, all in the name of combating Islamic terrorism. But what really happened on 9/11? Who did what to whom? Who is telling the truth and who is lying?

In the fifteen years since 9/11 a vast and multi-faceted citizens’ movement has done much of the investigative work that our thoroughly corrupted governments refused to do on our behalf. Why have there been no genuine investigations by officialdom into the originating event of the Global War on Terror? How was the federal investigation of the 9/11 crime transformed into a federally orchestrated cover up?

The outcome of the people’s inquiry points compellingly to the conclusion that the real culprits behind the 9/11 attacks were not a group of Islamic jihadists acting alone out of no other motivation than religious zealotry. Rather, the dominant group directing the 9/11 false flag event was composed primarily of Israel First neoconservatives who sought to demonize Muslims in order to create the necessary malleable enemy required for their purposes. The real culprits of 9/11 used the event to create a replacement enemy meant to revitalize the vast military and national security apparatus that was fast becoming obsolete following the end of the Cold War with the demise of the Soviet Union.

One of the objectives of the 9/11 criminals was to traumatize whole populations thereby making them more compliant and subject to manipulation. From the opening hours of the 9/11 debacle, the murder and mayhem was immediately blamed, without any forensic investigation whatsoever, on Muslim extremists said to be hostile to the West. The event was thereby framed within a pre-existing geopolitical concept already dubbed by Samuel Huntington as “a clash of civilizations.” The effect of the instant interpretation was to cast the Jewish state’s regional enemies as part of a larger Islamic conspiracy to undermine “the West.” 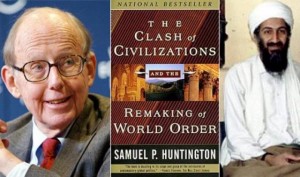 Huntington’s Clash of Civilizations was meant to signal that the core political economy of the USA, the so-called permanent war economy, should continue even though the Cold War had ended. The fabricated story line introduced on 9/11 was consistent with Huntington’s assessment that the new post-Cold War conflicts would cut across religious and cultural spheres of human interaction. With Huntington and Bernard Lewis as their guides, the authors of the 9/11 psychological operation have developed a false concept of “the West” as an exclusively Judeo-Christian construct. This post-9/11 interpretation has involved the creation of a false assumption that the history of Islamic religion, culture and philosophy is entirely external to the history of Western Civilization.

The characterization of Islam as a new and aberrant strain of influence in Europe and throughout the so-called “West” misrepresents the deep history of cross-cultural interaction. The Zionist-directed campaign to mischaracterize Muslims as a recent and alien injection into Western Civilization fails to take into account the importance of Islamic advances in mathematics, architecture, medicine and art in the genesis of the European Renaissance. As Edward Said has reminded us, there is an especially rich heritage in the Iberian peninsula of cross-fertilization between Jewish, Christian and Muslim scholars. Their collaborative exchanges flourished especially in Cordoba, the Iberian jewel of the Islamic caliphate of Al-Andalus.

Since 2001 the culprits of 9/11 have hired, armed, organized, and directed various mercenary proxy armies that fight under Islamic flags. With assistance being channeled especially through the CIA and Mossad safe haven of Saudi Arabia, these mercenary forces have done the bidding of their Zio-American patrons. Western-supported mercenary forces, including al-Qaeda and its supposed antagonistic cousin the “Islamic State” [ISIL, ISIS, IS, Daesh], have been deployed in a series of false flag terror events designed to keep alive anti-Muslim fear and loathing in Western minds.

Moreover, units of the so-called “Islamic State”, which funnel stolen oil to the European Union through Turkey, are regularly deployed throughout the Grand Chessboard of Eurasia. The aim is to give justification for Western military operations aimed ultimately at preparing the ground for the expansion of Greater Israel. The world’s dominant military-industrial complex has been covertly harnessed to this project of expansion. A crucial part of this network of military-industrial power lies in the Zionist-controlled mainstream media and institutions of higher education. These agencies have been co-opted to become instruments of the Islamophobic propaganda so crucial to preparing Western public opinion for aggressive invasions of Muslim countries such as Afghanistan, Iraq, Somalia, Libya and most recently Syria.

The deceptive façade of the Global War on Terror is meant to disguise this military and psychological system of aggressive warfare combined with engineered pollution of the mental environment with the toxin of hyped up Islamophobia.

Dr. Kevin Barrett has characterized the Global War on Terror as a global war on Muslims for Israel. Noam Chomsky disagrees. He has made himself a very significant nemesis to Kevin Barrett. Barrett is one of the most unrelenting researchers and publicists in the 9/11 Truth Movement. So far Chomsky has been quite effective in deploying his enormous prestige to prevent the citizens’ investigation on 9/11 from receiving a fair hearing, but especially in the foundation-funded platforms of progressive, Left, and anti-war activism.

This opening part introduces my essay, “9/11 and the Zionist Question: Is Noam Chomsky a Disinfo Agent for Israel?” In due course the larger paper will be published in its entirety here at American Herald Tribune. This essay explores the antagonisms between Kevin Barrett and Noam Chomsky with particular emphasis on the research and scholarship on false flag terrorism and especially on the contested events of 9/11. The argument is advanced that Prof. Chomsky has quite purposely promoted an agenda of cover up on 9/11, reducing himself to the level of crude propagandists and paid proponents of the dominant 9/11 narrative such as Jonathan Kay and Michael Shermer.

In the fifteen years since 9/11 the concerted and continuing cover up of the truth has become an enormous element of the overall 9/11 crime. Growing understanding of the role of mass media and institutions of higher learning in maintaining this cover up is fast eroding the credibility of these strategic agencies. The health of free and democratic societies depends on an informed citizenry who more often than not are deceived by the very agencies supposed to be responsible for public education.

You will read “Noam Chomsky as the Left’s Trojan Horse” in the next part.

The Middle East – The Betrayal by Its Globalized Elites

The Alliance of MI6, the CIA and the Banderites

“Greater Israel”: The Zionist Plan for the Middle East