Multiple anti-lockdown demonstrations were observed in Europe over the weekend.

The largest one was seen in the Austrian capital, Vienna, Saturday, where at least 10,000 people marched against new coronavirus restrictions. Then thousands more were seen in Amsterdam, the Netherlands’ capital, denouncing new restrictive measures against their freedoms imposed by the government.

On Saturday, the demonstration in Vienna was mostly peaceful, even with a massive crowd. As for protests in Amsterdam, well, many clashed with riot police in an unauthorized demonstration.

According to Reuters, the unauthorized gathering was around the Rijksmuseum and Van Gogh Museum art galleries on Sunday.

People were waving flags and carrying signs the read: “Freedom: stop this siege” and singing “What do we want? Freedom!”.

Many of the anti-lockdown protesters wore no masks nor practiced safe social distancing measures, such as standing six feet apart from one another. (ER: That is surely the point.)

Reuters noted the original protest on Museum Square was denied a permit. Still, demonstrators showed up anyway, angered that their freedoms have been whittled away under the guise of coronavirus restrictions. 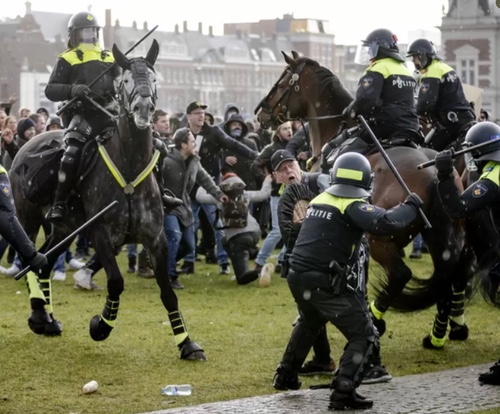 The crowd became more irate throughout Sunday afternoon as they clashed with riot police.

In the early days of the pandemic, the Dutch government was more reluctant than most neighboring countries to impose coronavirus restrictions. But during a dark virus winter, the government closed schools and shops in December, along with extending lockdowns by at least three more weeks.

Increased social restrictions have been the breaking point for many in the Netherlands. 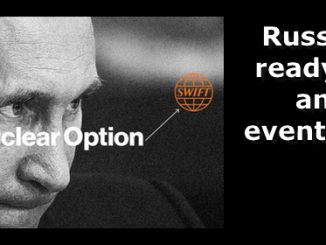 Russia Is Ready For A Possible SWIFT Cutoff, Debt-Sale Ban 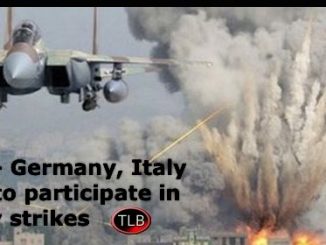