The Myth of Tax Rates: How the Rich Get Richer

SHARMINI PERIES: Michael, in your new book, J is for Junk Economics, we are going to talk about Trump’s plan to lower taxes. He has said that he would reduce corporate taxes from 35% to 15%. The 35% itself is a bit of a myth, because I don’t think there are too many corporations out there who do pay the 35%. But he’s going to reduce the number of tax brackets as well, he says, from seven to three.

And your myth number 11, which is progressive income taxes should be abolished in favor of flat tax, is a myth, just one tax rate for everyone. Does this make any sense to you?

MICHAEL HUDSON: It certainly makes sense if you’re a member of the 1%, and you want to avoid paying taxes. You want the taxes to be paid by the 99%. That’s their dream. If you want to see where 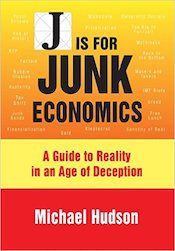 Trump is moving, look at what the United States neoliberals advised Russia to do after 1991, when they promised to create an ideal economy. Russia was under the impression that the neoliberal advisors were going to make Russia as rich as the United States. What they really did was create a kleptocracy that was virtually tax-free.

SHARMINI PERIES: How does that happen?

MICHAEL HUDSON: The majority of taxes are paid by the 10 percent. I’ll give you an example. From 2008 to 2016 all the growth in the American economy, all the growth in national income, was earned just by the wealthiest 5% of the population. So they got all the growth. 95% of the population didn’t grow. If you can get a flat tax or other lower tax, as Trump is suggesting, then this richest 5% will be able to keep even more money. That means that the 95% will be even poorer than they were before, relative to the very top.

Trump’s junk economics is the illusion that if we cut the taxes on the wealthiest brackets, it’ll all trickle down. But it doesn’t trickle down. What do the 5%, or the 1% actually use their money for? They lend it back to the economy at large, they load it down with debt. They make their money by lending to the bottom 95%, or the bottom 99%. When you give them more after-tax income, it enables them to buy even more control of government, even more control of election campaigns. They’re not going to spend this money back into the goods-and-services economy.

The average wage earner will get a little more break from marginally lower taxes. But the plan to finance these tax cuts is to cut back social services, or privatize the economy and treat it as an offset. So wage-earners are going to have to spend much more of their income on the higher cost of public services, education, healthcare, and everything else. Meanwhile, the economy is to be deregulated, so consumers will pay more to the monopolies, and to the banks. These higher costs will eat up the a little bit of a tax break they get. There will to be a redistribution of wealth upward, not downward.

SHARMINI PERIES: The seven categories of tax brackets we have now haven’t really been progressive, given the loopholes. Even the Warren Buffetts of the world are saying, “You know, I pay less taxes than my secretary.” How does that figure in your book, and related tax mythologies that we are forced to buy into?

MICHAEL HUDSON: One basic myth is that rich people get wealthy by earning income. But that’s not how most get rich. Most of the gains of the rich people since 1945 have been “capital gains”. A large chunk is on the rising price of real estate. The stock market has soared. It has gone up 10% just since Trump was elected, hoping for tax cuts and deregulation. That’s a huge capital gain. Nobody prefers to earn income any more because that’s taxable. Rich people prefer to make capital gains.

Since 2008 you’ve had the largest bond market rally in history, as the Federal Reserve flooded the economy with quantitative easing to drive down interest rates. Driving down the interest rates creates a boom in the stock market, and also the real estate market. The resulting capital gain is not treated as income. In real estate you can avoid ever having to pay a capital gains tax, decade after decade, century after century. When you sell a property and make a capital gain, you simply turn around and buy a new property. The gain is not taxed. It’s called “preserving your capital investment” – which goes up and up in value with each transaction.

If you’re a wealthy heir with a trust fund, and you sell stocks, make your 10% gains since Donald Trump, and then you buy other stocks, you can avoid paying taxes. And if your accountant registers your wealth offshore in a Panamanian fund, like Russian kleptocrats do – and as more and more Americans do – you don’t have to pay any tax at all because it’s not American income: it’s foreign income in an enclave without an income tax. That’s the “magic” of double-taxation treaties: you can shop around for the lowest taxer.

That’s why Apple, Microsoft and the big information technology companies have kept so much money registered abroad (although in US dollar accounts with a nominal foreign address s owner). They pretend to make their global income in Ireland. They have an office, which could be simply a postal drop box in Ireland, and claim to make all their money there, not in America.

The biggest industrial sector next to real estate is oil, gas and other mineral resources. They don’t report any taxable income because, if you depict yourself as earning a profit, you have to pay a tax on it. So, it’s all about what accountants choose to declare as profit.

Textbooks don’t teach people how to avoid paying any income tax. But that’s what an army of tax lawyers and corporate tax accountants do. Trump claims that he’s making taxes more democratic for the people, but it actually is a vast sucking of income and wealth upward.

SHARMINI PERIES: Let’s talk about loopholes. I earlier said that the 35% rate currently in place is hardly paid by the corporations, and you are making reference to that. Give us some examples of these loopholes, and how to address them – and if you have any solutions.

MICHAEL HUDSON: The worst loophole is what Donald Trump has talked about: the tax deductibility of interest. If you let real estate owners or corporate raiders borrow the money to buy a property or company, and then pay interest to the bondholders, you’ll load the company you take over with debt. But you don’t have to pay taxes on the profits that you pay out in this way. You can deduct the interest from your tax liability.

So if you pay interest to bondholders, and the corporate interest rate is what it was when the process began in the 1980s – about 50% – then you can pay twice as much of your corporate cash flow to bondholders as you could pay to stockholders. But in the process you load down corporations with debt. That’s what’s happened today. It’s called debt leveraging. Trump has said that he wants to remove the tax deductibility of interest. If he can do that, fine.

But I hope that Trump knows that it’s not the President that sets tax policy. It’s Congress. He knows that the last thing the Republicans, whom he helped bring into power in Congress and the Senate, are going to do is to close the biggest tax loophole in the United States. That is the basis for the corporate raider and takeover movement, for the financialization of industry, for the real estate sector, and for the oil and gas sector. You’re going to have every lobbyist in the country working to water down attempts to close this loophole.

So, Trump is making a promise that sounds absolutely great. But it’s a promise that cannot be done politically, under Congress as it’s now set up. He knows it won’t be done. It’s an easy promise to make, and he can then go to the people and say, “Oh, I wanted to help you folks, but Congress wouldn’t let me.”

ER recommends other articles by CounterPunch

Michael Hudson is a former Wall Street economist. A Distinguished Research Professor at University of Missouri, Kansas City (UMKC), he is the author of many books, including Super Imperialism: The Economic Strategy of American Empire (new ed., Pluto Press, 2002). His new book is: Killing the Host: How Financial Parasites and Debt Bondage Destroy the Global Economy (a CounterPunch digital edition). Sharmini Peries is executive producer of The Real News Network. This is a transcript of Michael Hudson’s interview with Sharmini Peries on the Real News Network. 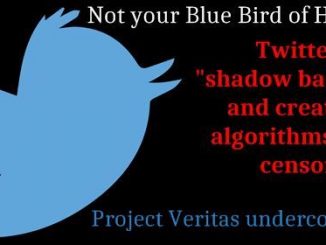 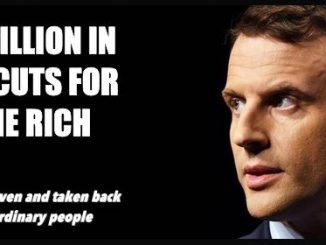 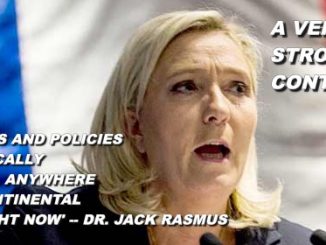