ER Editor: We are aware of the neocon biases of the Gatestone Institute. To that end, we totally repudiate the reasoning behind the conspicuously squeezed-in mention of Israel – that criticism of Israel, part of what’s wrong with the West allegedly, is made in order to get cheap oil and prevent terrorism. What a skilful way to avoid mentioning the ethnic cleansing of Palestine. We also issue a Muslim-bashing alert.

Europe presents itself as the vanguard of the unification of humanity. Europe’s cultural roots, as a result, have been put at risk. According to Pierre Manent, a renowned French political scientist and a professor at the School for Advanced Studies in the Social Sciences in Paris:

“European pride or European self-consciousness depend on the rejection of European history and European civilization! We want nothing to do with the Christian roots and we absolutely want to be perfectly welcoming to Islam”.

Manent delivered these words to the French monthly, Causeur. He cited, as an example, Turkey:

“It was very clear that not only was its massively Islamic character (even before Erdogan) not an obstacle but a sort of motive, a reason to bring the Turkey into the EU. It would finally have been the definitive proof that Europe had detached itself and freed itself from its Christian dependence”.

Europe’s southern border is now the front line for this mass-migration; Italy risks becoming that refugee camp. In the last few months, Italy has faced a succession of boats from Africa, challenging its policy: first the Sea Watch 3, then the Open Arms and finally the Ocean Viking. Until just before Italy’s March 2018 elections, migrants were crossing the Mediterranean at the rate of 200,000 a year.

Since European security ministers failed to agree on the Mediterranean refugee crisis, Italy’s Interior Minister Matteo Salvini, willing to stand virtually alone, chose to close Italian ports. Although Italian court tried to charge him with “kidnapping” migrants, Salvini’s policy worked and landings plummeted. In the first two months of 2019, 262 seaborne migrants reached Italy, compared to 5,200 in the same period last year, and more than 13,000 in the same period of 2017.

The Italian government collapsed on August 20; there is now the great possibility that a new pro-immigration leftist coalition will take its place. A ship attempting to bring to Italy 356 migrants from Africa, more than all who came in the first two months, has been stranded at sea since it picked up the migrants between August 9-12, while awaiting permission to land. In one standoff after another, NGOs have been attempting to break Salvini’s barricade against illegal immigration.

One ship already did. One of the captains of the Sea Watch 3, a German citizen, Pia Klemp, was even honored by the city of Paris for breaking the Italian blockade (ER: although apparently she turned down the award). According to the other German captain, Carola Rackete: “My life was easy… I am white, German, born in a rich country and with the right passport” — as if her determination to help migrants would be, in her own words, related to the comparatively privileged life she has lived in the West.

It is a false Marxist notion among young people in Europe that if you are successful or comfortable, it can only have been at the expense of humanity: “If I win, somebody else must lose.” There seems to be no concept at all of “win-win” — “If I win, all of you can win, too: everyone can win!” — that underpins a free-market economy and has lifted so much of the world so spectacularly out of poverty. Many of the young people see only barriers to be broken down. Pascal Bruckner called it, the “tyranny of guilt“.

Unfortunately, the price for cultural relativism has become painfully visible in Europe. The disintegration of Western nation-states is now a real possibility. Multiculturalism — built on a background of demographic decline, massive de-Christianization and cultural self-repudiation — is nothing more than a transitional phase that risks leading to the fragmentation of the West. Among the reasons for that, the historian David Engels listed “mass-migration, the aging of the population, Islamization and the dissolution of nation states”.

Mass migration has already undermined the unity and solidarity of Western societies and — combined with demonizing Israel in the hope of obtaining inexpensive oil and preventing terrorism — has destabilized the post-1945 political consensus.

German Chancellor Angela Merkel’s policy of open doors — “Wir schaffen das” (“We can do it”) — led to a right-wing party in her parliament. The Alternative for Germany (AfD) is now leading the polls in regional elections in the former East Germany. The French Socialist Party, which governed the country under President François Hollande, is now disappearing. The diktats of Brussels on immigration and quotas have broken the unity of Europe and resulted in the virtual “secession” of the Visegrad countries (Poland, Hungary, the Czech Republic, Slovakia). The migration utopia in Sweden brought a populist right-wing party into parliament, and the arrival of half a million illegal immigrants pushed the once-marginal League of Matteo Salvini to the top of Italy’s political establishment.

This list does not even include Brexit, the British vote to leave the EU. According to German journalist Jochen Bittner, writing in The New York Times last year:

“In late 2015, the Leave campaign started putting up placards which showed the exodus of refugees from Syria and other countries through the Balkans, and adorned them with slogans like ‘Breaking Point’ and ‘Take Back Control’. With Ms. Merkel declaring an open-door policy, the message hit home for millions of worried Britons and Europeans. Not coincidentally, it was around this time that support for Brexit began to tick up”.

Instead of decrying “populism” and “nationalism” all the time, might Europe rethink its decision?

Currently, the Europe that promised to avoid building more walls after 1989, when the Berlin Wall came down, is raising one after another one to defend itself from an unprecedented situation. There is the 15-meter Spanish barrier in Ceuta and Melilla; the Hungarian wall of Prime Minister Viktor Orbán; one at Calais in France; an Austrian fence planned at its border with Italy, a fence Slovenia wants to build at its border with Croatia and North Macedonia’s fence for its border with Greece.

Whether one likes it or not, Europe seems to be feeling an existential cultural threat from these great migratory flows. There is not only the pressure of illegal immigration; there is also pressure from legal immigration. More than 100,000 people applied for asylum in France in 2017, a “historic” number, and more than 123,000 applications in 2018. In Germany, there were 200,000 requests for asylum in 2018.

This mass immigration is changing Europe’s internal composition. In Antwerp, the second-largest city in Belgium and the capital of Flanders, half the children in elementary schools are Muslim. In the Brussels region, you can get some idea of the change by studying the attendance of religion classes in primary and secondary schools: 15.6% attend Catholic classes, 4.3% Protestant and Orthodox classes, 0.2% attend Judaism classes, and 51.4% attend Islamic religion classes (12.8% attend secular “ethics” classes). Is it clearer now what will happen in the capital of the European Union? We should not be surprised that immigration tops the list of worries of the Belgian population.

Marseille, the second-largest city in France, is already 25% Muslim. Rotterdam, the second-largest city in the Netherlands, is 20% Muslim. Birmingham, the second-largest city in Britain, is 27% Muslim. It is estimated that in one generation, a third of the citizens of Vienna will be Muslim. “Sweden is in a situation that no modern country in the West has ever found itself in”, observed Christopher Caldwell. According to the Pew Research Center, Sweden might well be 30% Muslim by 2050; and 21% Muslim in the unlikely event that the flow of immigrants stops altogether. Today, 30% percent of Sweden’s babies have foreign-born mothers. The city of Leicester in the UK is presently 20% Muslim. In Luton, out of 200,000 inhabitants, 50,000 are Muslim. Most of the population growth in France between 2011 and 2016 was driven by the country’s large urban areas. At the top are Lyon, Toulouse, Bordeaux and the Paris area, according to a study published by the French National Institute of Statistics and Economic Studies. In Lyon, there are about 150,000 Muslims out of a population of 400,000. According to one article, 18% of the newborns in France carry a name that is Muslim. During the 1960s, the number was 1%.

(ER: Muslims are not the only immigration category!)

Unfortunately, the European mindset refuses to face the reality, as if the challenge is too severe to be addressed. “The unstoppable progression of this system makes me think of a tea on board the Titanic”, prominent French philosopher Alain Finkielkraut writes.

“It is not by turning a blind eye to tragedy that it will be prevented from happening. What will be the face of France in fifty years? What will the cities of Mulhouse, Roubaix, Nantes, Angers, Toulouse, Tarascon, Marseille and the whole Seine Saint-Denis department look like?”

If the population changes, the culture follows. As the author Éric Zemmour points out, “after a certain number, quantity becomes quality”. 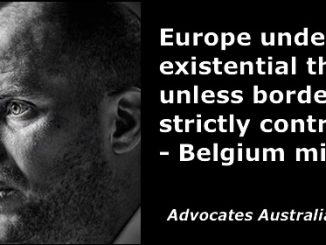 Belgium: EU Must Close Borders, Turn Back Boats Or ‘There’ll Be No More European Union’ 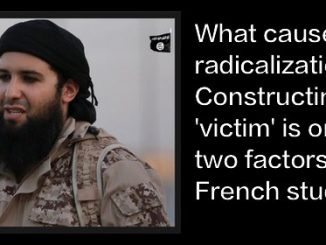 France – The Ideology of Islamic Victimization 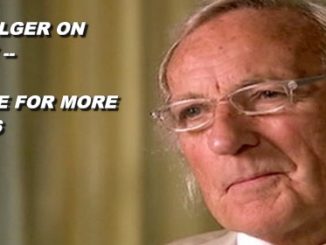