The finale is upon us: the Russia-gate fraud is about to be exploded, at long last. Although the vaunted memo – and the underlying intelligence – compiled by the leadership of the House Intelligence Committee under chairman Devin Nunes (R-CA) has yet to be released, there has been enough chatter

by those House members who have read it to give us the basic elements of what it contains. Although prepare to be shocked by what I consider to be the most outrageous aspect of this affair.

To begin with, it’s clear that the “dossier” paid for by the neocons over at the Free Beacon and then taken up later by Hillary Clinton was submitted to the FISA court by the FBI as the factual basis for allowing secret surveillance of the Trump campaign, possibly including Donald Trump himself. The FISA judge was reportedly not told who paid for the dossier.

In an interview with the Daily Caller, veteran law enforcement professional Joseph DiGenova cites as evidence of a pattern of deception the details of a FISA court opinion (April 27, 2017) that charged the Obama administration with lying to the court and illegal use of material obtained through their spying campaign. The court said the government’s actions were “abusive” because the purloined material was handed out to “contractors.”  We aren’t told who these contractors are. My guess – and DiGenova’s: Fusion GPS, the firm hired to smear Trump, and CrowdStrike, the  cyber-security firm in charge of the DNC’s email system – which the FBI never was allowed to look at.

The anti-Trump coup plotters constructed an elaborate fiction for the benefit of the FISA court, presented it to the court as factual, and used it as the basis for obtaining a warrant for the Obama administration – and, in effect, the Clinton campaign – to not only spy on the Trump campaign but to actively disrupt it.

Secondly – and this, I think, is why the memo and the underlying intelligence is so highly classified – the FBI/CIA factor in this operation is just a part of the whole. The 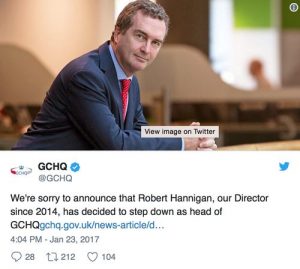 involvement of “former” MI6 agent Christopher Steele argues in favor of British involvement. And, of course, it could be a mere coincidence that Robert Hannigan (see insert), the head of the GCHQ – the British spy outfit – resigned shortly after the Steele story broke. And then again maybe not.

And it’s not just the British, who have been conducting their own cold war against Russia since long before Russia-gate broke in this country. A number of other foreign intelligence agencies reportedly had a hand in all this, including the Ukrainians and the Estonians, whose virulent hatred of Russia and fear of Trump’s peaceful intentions toward Moscow were motivation enough.

That’s the reason for the intra-Republican dispute about releasing the memo: the “internationalist” types (who aren’t especially friendly to Trump) fear roiling relations with our “allies.” Those who want to release it realize that with “allies” like these, we don’t need enemies.

Nunes, Rep. Trey Gowdy, and Judiciary Committee chairman Bob Goodlatte are now trying to figure out how to initiate a “never before used procedure” to release the really juicy stuff – the underlying intelligence that nails these felons for abusing the FISA system, spying on Americans,  subverting the electoral process, and, yes, colluding with foreign powers to subvert and destroy Trump’s presidency.

If our system works the way it ought to be working, a lot of these people are going to jail. These are felonies we’re talking about. The Foreign Intelligence Surveillance Act, recently renewed and given even more sweeping powers to spy on us, makes it a crime to present false evidence to the FISA court: under section 1809, FISA makes it a crime for anyone to either “engage in” electronic surveillance under “color of law” by presenting false evidence. Penalty: five years in jail and/or a $10,000 fine

Now the coup plotters are destroying evidence as fast as they can: the FBI just informed Congress that text messages sent by Robert Mueller’s investigators, Peter Strzok and his FBI lawyer paramour Lisa Page, filled with anti-Trump material – and possibly detailing the “insurance policy” Strzok talked about to prevent Trump from either taking office or functioning as President – were “mistakenly” destroyed.

The “how” is now coming out, but I’m convinced people like James Comey, Andrew McCabe, and John Brennan are just part of the story. The other part is the foreign nationals who I believe are deeply involved in the genesis and implementation of this wrecking operation. Trump’s talk of getting out of NATO, cutting down on US military intervention abroad, as well as his opposition to a new cold war with Russia – this last especially angered the Brits and the East Europeans – threatened their precious “international order,” not to mention the political agenda of the Davos crowd.

Americans will be shocked by the nature and extent of the FBI/CIA’s interference in our domestic politics, but they’ll also be surprised at the way our spooks dominate – not just influence, but dominate – what passes for American journalism today. I’d bet the farm that there isn’t a single “mainstream” media outlet that isn’t beholden to them. The reason I say this with such alacrity is that “Operation Get Trump” couldn’t have happened without the kind of fulsome partisanship we’re seen since before Trump took office. We’ve seen this kind of thing before – only not in this country. We saw it in Ukraine, where the CIA and their Euro-weenie allies overthrew an elected President Yanukovich. We saw it in Chile,when they overthrew Salvador Allende, we saw it in Guatemala when they got rid of President Jacobo Arbenz – heck, I could spend  the rest of the week just listing their crimes.

It was inevitable that they’d try to pull the same thing off in America. Oh, the irony! We thought of our allies as if they were our satellites – but who is revolving around whom? The mere threat that American largesse might be withdrawn, that our “allies” will have to start paying their own way, and that we want to rip up the many tripwires that could plunge us into war halfway around the earth for no good reason – this is what mobilized the War Party to declare war against … their own country. We have become a prisoner of our own empire.

When all this is over – if it ever is – Congress must gather its courage and examine exactly what went on here. We need a new Church Committee to rein in the FBI and the CIA — and the other 16 intelligence agencies we inexplicably operate.

That, of course, is after the culprits are thrown in jail.

And for the absolute last time: this isn’t about Trump. It’s about preserving the American republic against rogue intelligence agencies and the FBI – a national police force which we don’t need, which the Founders never envisioned, and which has proven itself to be a deadly danger to the American system.

NOTES IN THE MARGIN

You can check out my Twitter feed by going here. But please note that my tweets are sometimes deliberately provocative, often made in jest, and largely consist of me thinking out loud.

I’ve written a couple of books, which you might want to peruse. Here is the link for buying the second edition of my 1993 book, Reclaiming the American Right: The Lost Legacy of the Conservative Movement, with an Introduction by Prof. George W. Carey, a Foreword by Patrick J. Buchanan, and critical essays by Scott Richert and David Gordon (ISI Books, 2008).

You can buy An Enemy of the State: The Life of Murray N. Rothbard (Prometheus Books, 2000), my biography of the great libertarian thinker, here.

ER recommends other articles by Antiwar.com 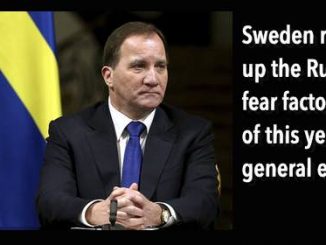 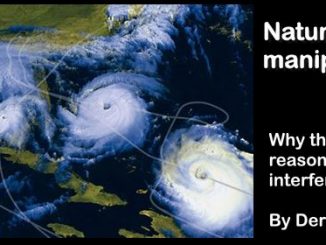 Yes, the US Government Has Experimented With Controlling Hurricanes – Derrick Broze