ER Editor: The piece below is standard MSM fare from Agence France Press (AFP) on Edouard Philippe starting his own centre-right (globalist) party.

We remind readers of a piece we ran on former French PM under Macron, Edouard Philippe and Anthony Fauci:

Edouard Philippe, Macron’s former prime minister who jumped ship in 2020 after the plandemic got going (no surprises there), is making many noises about wanting to ensure Rothschild lackey Macron gets back in power. This sounds like another way to garner some safe pro-globalist, pro-EU votes on the right IN CASE Eric Zemmour, the Rothschild-backed candidate to draw votes away from Marine Le Pen, turns them off, or in case Macron with his disastrous policies does the same. There is, of course, the standard centre-right Les Republicans (LR) that Philippe came from.

For Edouard Philippe’s connections to Bilderberg (he attended in 2016), via Macron (2014), see here (English) and here (French).

It sounds like the Rothschild-led Establishment are doubly, triply or even quadruply shoring up the right-wing French vote to ensure any kind of populism, especially led by Le Pen, will not succeed.

AFP – Fifteen months after his departure from Matignon, Edouard Philippe launched Saturday his own party, named “Horizons”, to “participate in the constitution of a new political offering” and expand towards the right the base of support for Emmanuel Macron.

“With Horizons, we will define a strategy for France, it is a collective adventure,” said the former Prime Minister (ex-LR) in his city of Le Havre, explaining that the name had been chosen “because it is necessary to see far”.

“Its positioning is ahead”, with “a logic of partnership, of gathering”, and “the line is to prefer serenity to feverishness”, he added.

And “the second clear line is to support the President of the Republic” so that “the next five years will be useful years”.

Because “very clearly, my objective in 2022 is that Emmanuel Macron is re-elected,” he declared, while some suspect him of wanting to go it alone, at a time when the Macronie is trying to build a “common house”.

“If it is a banner, we will be behind it,” he assured the crowd to much applause while asking for equal treatment within this “common house” with LREM and MoDem.

“I am not a candidate for anything for 2022,” said Edouard Philippe in the evening to the Journal du Dimanche. He will not run for the legislative, wanting to remain mayor of Le Havre, “the most beautiful of mandates.”

The leaders of the three parliamentary groups of the majority in the Assembly, Christophe Castaner (LREM), Olivier Becht (Agir) and Patrick Mignola (MoDem) had made the trip to Normandy.

The meeting was also attended by 160 mayors, 600 local elected officials (including the mayors of Fontainebleau – Frédéric Valletoux, and Reims – Arnaud Robinet) and about sixty parliamentarians, including Marie Lebec, Pierre-Yves Bournazel, Naïma Moutchou or Marie Guévenoux.

During his speech of almost two hours, peppered with references to Nicolas Sarkozy, Valéry Giscard d’Estaing and Alexandre Dumas, Edouard Philippe evoked “four extremely massive and significant transformations” that the country will have to face – demographic, environmental, geopolitical and technological – and defended “constancy” and “coherence” to respond to them.

He also called for “putting our accounts and our streets in order”, and defended at length his idea of “probably” raising the retirement age to “65, 66, 67”. So many winks to the right, that the ex-LR (ER: Les Republicains, Sarkozy’s former party, a globalist right) is suspected in his former family to want to siphon off support in the run-up to 2022, taking advantage of hesitations on the name of the candidate or the attraction that Eric Zemmour could exercise on the hard right.

“The beam works, and believe me, it has not finished working,” said Edouard Philippe, referring to a political recomposition that remains “obviously in progress. And the re-election of Emmanuel Macron “will pass by a widening of its electoral base,” he argued.

On his arrival in Le Havre, Olivier Becht had already assured, referring to the members “at LR and UDI who share our values”, that “if Edouard Philippe manages to bring these people into the common house, it is as many positive points.”

The new party will allow to constitute “a formidable attack, but not only for the presidential election”, said Patrick Mignola.

In this device, the elected officials will be crucial, many right-wing Macron-compatible mayors have already joined the movement “The Republic of Mayors”. The new formation will reserve them a place of choice, since they will have their own “assembly of mayors” which will elect the vice-president.

The statutes of the party will be filed on Monday, and it will have a charter of 20 principles including “the pursuit of the transformation of the country”, “order”, “social justice” and “the European project”. It is also to fight “the extremes of all sides”, “the enemies of secularism”, “the supporters of degrowth” as well as “the naive and populist of immigration”.

On the left wing of the Macronie, the small party Territories of Progress, launched in early 2020 by Foreign Minister Jean-Yves Le Drian, held its own congress Saturday in Bordeaux. Budget Minister Olivier Dussopt (ex-PS) has taken the presidency. 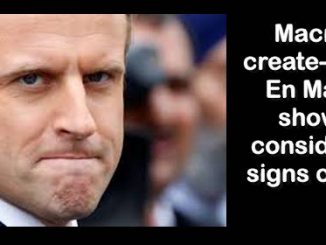