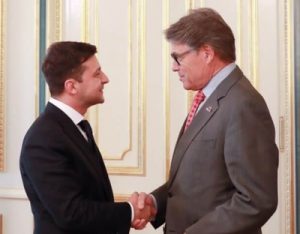 On Tuesday May 21st, US energy secretary Rick Perry made headlines after paying a visit to the newly elected administration of Volodymyr Zelenskiy (pictured). The visit itself wasn’t the cause of the headlines but rather Perry’s hubristic attack on Russia’s Nord Stream 2 pipeline and prophesying that a sanctions bill against western companies building the pipeline will pass into law in the immediate future. Perry said: “The United States Senate is going to pass a bill, the House is going to approve it, and it’s going to go to the President and he’s going to sign it, that is going to put sanctions on Nord Stream 2”.

Perry (who characterized his remarks as “his opinion” and thus not necessarily those of President Trump whom he was attempting to speak for) was referring to the 1,222 km (9.5 billion Euro) pipeline begun last 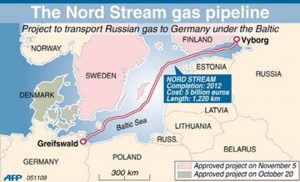 year, which Russia’s Gazprom has been constructing alongside four western companies. Once completed in early 2020, this project will double the current 55 billion cubic meter/year Russian gas output to Germany through the Baltic Sea (ER: via the original Nord Stream pipeline). This line is not only vital for European energy security as Euro zone nations have suffered years of unreliable and extremely expensive green energy, but cannot legally invest in long term energy projects that would revive its productive potential as EU rules ban deficits greater than 3% of GDP. Technocrats in the EU have even pressured countries to shut down nuclear energy entirely with Germany leading the pack with its commitment for full shut down by 2022 (ironically, this has caused Germany’s carbon emissions to soar to 10 times those of Francewho still gets 70% of its energy from nuclear power). Energy deficits can only currently be met by Russia, whose oil and gas supplies 60% of the European Union’s energy needs with Italy and Germany accounting for half of that.

Technocrats and Neocons throw a tantrum

The Nord Stream 2 project has long faced resistance by the United States and has suffered many serious setbacks since sanctions on Russia caused a halt to the pipeline’s earlier planned start in 2015. Ukraine and her technocratic controllers are now confronting the fact that they put themselves in an un-winnable position since Ukraine’s puppet regime seeks the contradictory goal of enjoying the $2-3 billion annual transit fees (3% of its GDP) earned by having Russian gas pass to Europe through its territory while simultaneously wishing to integrate into the failing Euro energy market. Gazprom’s CEO Alexei Miller confirmed that Ukraine’s fears of this lost revenue are well founded when he said on April 28, 2018 that after the project’s completion, “volumes of such transit will be much lower, probably 10 to 15 billion cubic meters/year” (15% of its current volume).

“the construction of Nord Stream 2 is a kind of Russia’s energy weapon. They want to use this energy weapon to influence European partners. Ukraine is categorically opposed to construction. We thank the United States for its support on this important issue”.

Already a week before Groysman’s comments, a bi-partisan bill was introduced in the U.S. senate calling for the sanctioning of all vessels cooperating on the Nord Stream 2 build. Tom Cotton, one of the Senators co-sponsoring the resolution it said:

“if the project isn’t stopped, Moscow will use the pipeline to split eastern nations away from those of central and Western Europe. The German government must deny Putin this opportunity to weaken the NATO alliance. If Berlin won’t act, the United States will.”

The thinking expressed by Perry, Groysman and Cotton reflect the height of delusion and desperation of the western technocratic elite who have been watching their carefully planned system of economic, energy, military and political controls over the trans-Atlantic slip away ever since 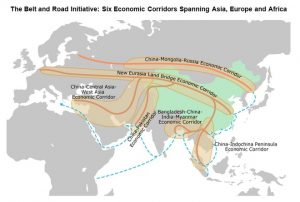 2013. This was the year that Russia and China began creating an alternative new multipolar world order alongside other Eurasian nations, starting in earnest with China’s September 2013 creation of the Belt and Road Initiative (pictured), followed by Russian’s 2015 intervention into Syria, and unification of the Eurasian Economic Union with the BRI.

Of course, rather than admit that Europe’s disintegration and the split between eastern and western Europe has anything to do with their own faulty thinking, these technocrats and neo cons can only bring themselves to blame Russia as the cause of everything wrong with their world. Perhaps the conditions of draconian austerity to service the bankrupt financial system have something to do with the collapse of the stability of the European Union. Perhaps the NATO-led drive to play nuclear chicken with the missile shield around Russia and NATO’s collective security pact has something to do with it? Or maybe the decreased standards of living accompanying the carbon emission cuts that have nearly doubled much of Europe’s household “green” energy costs and reduced productive industrial power have something to do with Europe’s problems. No, the answer must be Russia.

Nord Stream 2 and the BRI: A Hope for Europe

The reality is that Russia’s Nord Stream 2 pipeline is a major lifeline for a beleaguered Europe, and provides an economic gateway to broader European integration into the growing infrastructure complex of the New Silk Road, which is providing for the first time in decades long term productive investments tied to the REAL (vs. speculative) growth of Europe’s physical economies with rail, energy corridors, telecommunications connecting east to west (and increasingly north to south) in ways thought unimaginable just a few years ago. Pre-empting Perry’s threat, Germany’s Foreign Minister Heiko Mass said in January 2019 that “questions of European energy policy must be decided by Europe. Not the USA. To impose unilateral sanctions against Nord Stream 2 is not the way to go”.

Europeans are beginning to take notice that there are now two competing systems pulling the world in two opposing directions, and that Europe has increasingly fallen under a future-less cage. Just in the past two months, major deals have been signed extending Chinese rail, ports and infrastructure to Greece, Germany, Italy, France Spain and uplifting every nation in between. Italy’s joining the BRI in March was followed by similar MOU’s signed by Switzerland and Luxembourg in April, while Greece made headlines becoming a member of the 16+1 Central and Eastern European nations working with China’s BRI.

Whether nationalist leaders such as President Trump and other figures in Europe continue to resist the deep state drive for war and economic fascism by working with the Russia-China alliance or submit to the whims of the technocrats and their London-centered managers remains yet to be seen.

Follow the Money Trail Behind the Hong Kong Protests