ER Editor: See these earlier articles we published on the graphene oxide discovery, which has been used to explain why vaccine recipients appear to be magnetic:

Originally, we had wondered which vaccine they were referring to. This video confirms it’s the mRNA type (Pfizer in particular) that contains this substance. But this interview goes further, claiming that graphene oxide is CAUSING COVID SYMPTOMS, and has been found to be present in each and every step of diagnosis and treatment. And 5G has a role to play …

We do not subscribe to the ‘everything is reducible to graphene’ theory. As we have published on extensively, something (or several things) of a pulmonary nature was circulating way back in 2019, producing a slightly different type of pulmonary fibrosis, according to a Taiwanese virologist who alerted the CDC because of cases found on US soil and got the brush off. In March 2020 in France, as in many places, there was something of a respiratory nature going around that a few susceptible people we know got, people who don’t get flu or suffer from lung problems. Some of these symptoms were a little unusual (upper respiratory tract burning, and a curious return of symptoms after 15 days – which appeared in the French govt’s list of symptoms at the time) but which have NEVER BEEN INCLUDED in the official, SURVIVING list of COVID symptoms, which we find exceedingly strange. There were no graphene-containing masks, PCR tests or vaccines at that point. We do subscribe to the multiple bioweapon theory (which they don’t want identified and sequenced for obvious reasons), with graphene additives inserted along the way to keep the virus scare/symptoms alive. And to justify multiple, annual vaccines.

If graphene in the vaccines is causing Covid symptoms, then haven’t the vaccines been weaponized in TWO ways? First, through graphene, and second through causing massive spike protein production, which is also toxic.

Curiously, this research is, so far, only being conducted in Spain and Chile.

There is an interesting 25-minute video interview below with Prof. Michel Chossudovsky and Ricardo Delgado Martin. Here we offer some notes but recommend listening to the interview:

Video: Graphene Oxide: A Toxic Substance in the Vial of the Covid-19 mRNA Vaccine 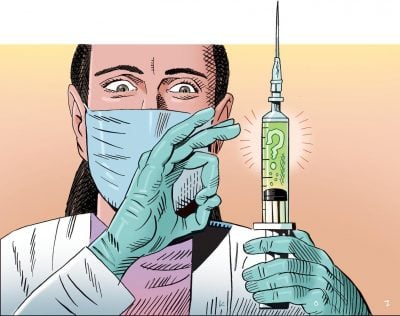 We bring to the attention of Global Research readers this important interview with Ricardo Delgado Martin, Founder and Director of Quinta Columna. Ricardo is responsible for coordinating the Spanish research team’s analysis of the impacts of graphene oxide nano-particles contained in the vial of the mRNA vaccine.

The results of their analysis by electron microscopy and spectroscopy are far-reaching.

Graphene oxide is a toxin which triggers thrombi and blood coagulation. It also has an impact on the immune system. Graphene oxide accumulated in the lungs can have devastating impacts.

The results of the Spanish study suggest, yet to be fully confirmed, that the recorded vaccine related deaths and “adverse events” (e.g. published in the US by the CDC and in the EU) are attributable to the presence of graphene oxide nano-particles contained in the Covid vaccine vial.

Of significance, (acknowledged by national health authorities) graphene oxide is also contained in the face mask.

Graphene has electromagnetic properties which have been detected in people who have been vaccinated. These effects have been amply documented and confirmed. See the study conducted by the European Forum for Vaccine Vigilance.

There is evidence that the Covid-19 “vaccine,” which contains graphene oxide has resulted in a pattern of deaths and injuries worldwide.

Speaking on behalf of the Spanish research team, Ricardo Delgado Martin recommends that the covid-19 experimental mRNA vaccine should be cancelled and discontinued immediately.

France’s Police Protest Movement: The Unspoken Truth is that their Demands are Similar to those of the Yellow Vests

4 Comments on Graphene Oxide Blockbuster: It Causes CV Symptoms and is Present in all Aspects of Diagnosis and Treatment