ER Editor: A major announcement is expected to be delivered by Putin, which apparently has western leaders on edge, who have been otherwise occupied with the Queen’s funeral. At the time of publication, we can find no evidence that Putin has yet given this address. From Moon of Alabama yesterday:

On The Upcoming Putin Speech And Announcements

Moscow has made a decision how to proceed in the proxy war with NATO in the Ukraine.

We do not yet know what the decision is.

The President of the Russian Federation Vladimir Putin will hold a TV speech at 8 pm Moscow time (17:00 UTC) followed by an announcement by Defense Minister Sergei Shoigu.

In July Putin has held a press conference or speech where he said with regards to Ukraine something like: “We haven’t even started yet.”

It may be that Russia will do that now.

About the referenda wanted by pro-Russian regions of Ukraine (MoA again):

Yesterday (ER: 19th September) the parliaments of the Luhansk and Donetz People’s Republics suddenly requested their government to immediately launch referendums about the republics accession to the Russian Federation. Today Denis Pushilin, the head of of the DNR government, announced that a referendum will be held on September 23 to 27.

Also yesterday the Russian parliament introduced amendments to the Russian Criminal Code which will increase the prison penalties for ‘voluntary surrender’, ‘looting’, ‘non-fulfillment of military orders’ during a time of mobilization, martial law and war. Companies who reject to produce for the military will also be penalized. The amendments passed their second reading in parliament today and will become law after a third reading.

If the LNR and DPR vote to become part of Russia, and if Russia accepts it, any attack of them will be an act of war against Russia. The ‘Special Military Operation’, which Russia is currently proceeding with, would thus change into something way more serious. Russia could declare the conflict to be a war. It could then use conscripts in war functions, mobilize reserves and use its full arsenal against the Ukraine. Potentially also against those who support it with weapons and other war material.

The Duran team of Alexander Mercouris and Alex Christoforou discuss what staging these referenda means in line with MoA’s assessment. Mercouris is of the opinion that regions suddenly demanding referenda has been a move long in the preparation stage:

RT has this on the Donbass (LNR and DPR) referenda:

The referendums will take place from 23 to 27 September, according to LPR and DPR leaders

Referendums to join the Russian Federation will be held in the Lugansk and Donetsk People’s Republics (LPR and DPR) from September 23 to 27, the leaders of the states announced on Tuesday.

LPR head Leonid Pasechnik was the first to sign a law on “holding a public referendum in the republic on the inclusion of the region into the Russian Federation,” after its parliament unanimously supported the move and set a date for the vote.

The LPR’s decision was soon followed by DPR leader Denis Pushilin, who declared that his state would also be holding a similar referendum on the same date. Pushilin said he had already introduced the relevant legislation in the DPR’s parliament.

Russia recognised the two territories as independent in February, but most of the world still regards them as part of Ukraine. However, Kiev lost de facto control of both in 2014, when the local populations rejected the outcome of the Western-backed Maidan coup.

In a letter addressed to the Russian President Vladimir Putin, Pushilin urged the latter to consider incorporating the DPR in the territory of the Russian Federation if people approve the unification during the plebiscite.

“The long-suffering people of Donbass deserve to be part of the Great Country, which they have always considered their Motherland. This event will be the restoration of historical justice, the onset of which millions of Russian people crave,” he wrote.

The announcement of the referendum comes after the civic chamber of the LPR urged republic’s leaders on Monday to “immediately” hold a vote on joining Russia, stating that it was important to expedite the process and hold a vote as soon as possible.

“The events of recent days have shown that the Kiev nationalists have crossed all the red lines,” said the deputy head of the chamber, Lina Vokalova, pointing to the relentless shelling of the LPR’s civilian population. (ER: There is plenty of evidence, since 2014 in fact, that Donbass residents have been continually attacked by Ukraine forces.)

She also recalled that the people of Donbass had already made their choice back in 2014, when the first “self-determination referendum” to secede from Kiev’s rule took place. “All these years we have been waiting and believing that the second one will definitely follow, which will fulfill our dream of returning home – to the Russian Federation,” Vokalova added.   CONTINUE READING HERE

See this by Readovka (browsers will translate): Most Donbas residents want to join Russia. Support for joining Russia from all regions mentioned runs at 80 to 90% according to this report. 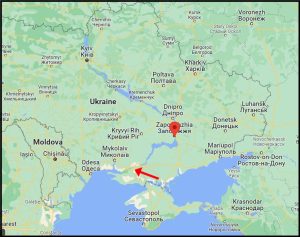 As the TASS report below indicates, referenda may also be held in the Kherson and Zaporozhye regions (see map above) as well as Luhansk and Donetsk (Donbass), and Ukraine is none too happy: Kyiv, 21 September. /TASS/. Citizens of Ukraine in territories not controlled by Kyiv for participating in referendums on joining Russia may face criminal liability in the form of imprisonment for up to five years. Ukrainian Deputy Prime Minister, Minister for the Reintegration of Uncontrolled Territories Irina Vereshchuk said this on Tuesday in a commentary to the Strana newspaper.

“Some lawyers believe that such actions may fall under part 1 of article 110 of the Criminal Code of Ukraine (“Infringement on the territorial integrity and inviolability of Ukraine”): this is imprisonment for up to five years,” she answered the question of whether whether ordinary citizens face punishment for participating in plebiscites. Vereshchuk called on residents of territories not controlled by Kyiv not to go to referendums and “leave if possible.”

The organizers of the plebiscites, she said, face five to 10 years in prison with confiscation of property. “According to the law on the legal regime of wartime, referendums on the territory of Ukraine are prohibited. The organizers and participants in the holding of referendums will be punished in accordance with Part 5 of Article 111-1 of the Criminal Code of Ukraine – this is imprisonment for a term of five to 10 years with deprivation the right to hold certain positions or engage in certain activities for up to 15 years with confiscation of property,” the Deputy Prime Minister explained.

The authorities of the Donetsk and Luhansk People’s Republics, as well as the administrations of the Zaporozhye and Kherson regions, decided to hold referendums on joining Russia as subjects of the Federation. Voting in all these territories will take place from 23 to 27 September.

Featured image: People vote in a referendum organized by the so-called Donetsk People’s Republic at a polling station in Donetsk, Ukraine, May 11, 2014.Maxim Shipenkov / EPA

More on Poland and the EU: Who’s In the Stronger Position? [VIDEO]