Europe’s Energy Armageddon from Berlin and Brussels, Not Moscow

Our ‘side’, the one that loves to cite the ‘rules-based order’ mantra, operate like lawless cowboys.

When Green fanatic Robert Habeck, posing as Germany’s Economy Minister, said earlier this week “we should expect the worst” in terms of energy security, he conveniently forgot to spell out how the whole farce is a Made in Germany-cum-Made in Brussels crisis.

Flickers of intelligence at least still glow in rare Western latitudes, as indispensable strategic analyst William Engdahl, author of A Century of Oil, released a sharp, concise summary revealing the skeletons in the glamour closet.

In a nutshell: as Engdahl describes it, this is about “the EU plan to de-industrialize one of the most energy-efficient industrial concentrations on the planet.”

The whole scam started way back in the early 2000s: I remember it vividly, as Brussels used to be my European base in the early “war on terror” years.

At the time, the talk of the town was the “European energy policy”. The dirty secret of such policy is that the EC, “ advised” by JP MorganChase as well as the usual mega speculative hedge funds, went all out into what Engdahl describes as “a complete deregulation of the European market for natural gas.”

That was sold to the Lugenpresse (“lying media”) as “liberalization”. In practice, that’s savage, unregulated casino capitalism, with the “free” market fixing prices while dumping long-term contracts – such as the ones struck with Gazprom.

How to decarbonize and destabilize

The process was turbo-charged in 2016, when the last gasp of the Obama administration encouraged massive export of LNG out of the US’s huge shale gas production.

For that one needs to build LNG terminals. Each terminal takes as much as 5 years to build. Within the EU, Poland and Holland went for it from the start.

As much as Wall Street in the past invented a “paper oil” speculative market, this time they went for a speculative “paper gas” market.

Engdahl details how “the EU Commission and their Green Deal agenda to ‘decarbonize’ the economy by 2050, eliminating oil, gas and coal fuels, provided the ideal trap that has led to the explosive spike in EU gas prices since 2021.”

The creation of this “single” market control implied forcing illegal rule changes on Gazprom. In practice, Big Finance and Big Energy – which totally control anything that passes for “EU policy” in Brussels – invented a new pricing system parallel to the long-term, stable prices of Russian pipeline gas.

By 2019, an avalanche of Eurocrat energy “directives” by the EC – the only thing these people do – had established a totally deregulated gas market trading, setting the prices for natural gas in the EU even as Gazprom remained the largest supplier.

As lots of virtual trading hubs in gas futures contracts started popping up across the EU, enter the Dutch TTF (Title Transfer Facility). By 2020 the TTF was established as the real EU gas benchmark.

As Engdahl points out, “TTF is a virtual platform of trades in futures gas contracts between banks and other financial investors. Outside, of course, of any regulated exchange.

So LNG prices soon started to be set by futures trades in the TTF hub, which crucially happens to be owned by the Dutch government – “the same government destroying its farms for a fraudulent nitrogen pollution claim.”

By any means necessary, Big Finance had to get rid of Gazprom as a reliable source to allow powerful financial interests behind the Green Deal racket to dominate the LNG market.

Engdahl evokes a case very few know about across Europe: “On May 12, 2022 although Gazprom deliveries to the Soyuz gas pipeline through Ukraine were uninterrupted for almost three months of conflict, despite Russia’s military operations in Ukraine, the NATO-controlled Zelensky regime in Kiev closed a major Russian pipeline through Lugansk, that was bringing Russian gas both to his Ukraine as well as EU states, declaring it would remain closed until Kiev gets full control of its pipeline system that runs through the two Donbass republics. That section of the Ukraine Soyuz line cut one-third of gas via Soyuz to the EU. It certainly did not help the EU economy at a time Kiev was begging for more weapons from those same NATO countries. Soyuz opened in 1980 under the Soviet Union bringing gas from the Orenburg gas field.” 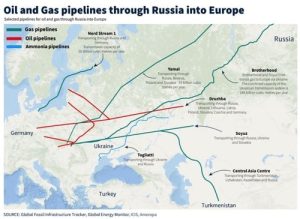 On the interminable soap opera involving the Nord Stream 1 turbine, the crucial fact is that Canada deliberately refused to deliver the repaired turbine to Gazprom – its owner – but instead sent it to Siemens Germany, where it is now. Siemens Germany is essentially under American control. Both the German and Canadian governments refuse to grant a legally binding sanction exemption for the transfer to Russia.

That was the straw that broke the (Gazprom) camel’s back. Gazprom and the Kremlin concluded that if sabotage was the name of the game, they couldn’t care less whether Germany received zero gas via Nord Stream 1 (with brand new Nord Stream 2, ready to go, blocked for strictly political reasons).

Kremlin spokesman Dmity Peskov took pains to stress “problems in [gas] deliveries arose due to sanctions that have been imposed on our country and a number of companies by Western countries (…) There are no other reasons behind supply issues.”

Peskov had to remind anyone with a brain that it’s not Gazprom’s fault if “the Europeans (…) make a decision to refuse to service their equipment,” which they are contractually obligated to do. The fact is the whole Nord Stream 1 operation hinges on “one piece of equipment that needs serious maintenance.”

Deputy Prime Minister Alexander Novak, who knows one or two things about the energy business, cleared up the technicalities:

“The entire problem lies precisely on [the EU’s] side, because all the conditions of the repair contract have been completely violated, along with the terms of shipping of the equipment.”

All that is inscribed into what Deputy Foreign Minister Sergey Ryabkov describes as “a total war declared against us”, which is “being waged in hybrid forms, in all areas”, with “the degree of animosity of our opponents – of our enemies” being “enormous, extraordinary.”

So none of this has anything to do with “Putin weaponizing energy”. It was Berlin and Brussels – mere messengers of Big Finance – which weaponized the supply of European energy on behalf of a financial racket, and against the interests of European industry and consumers.

Beware of the toxic trio

Engdahl has summarized how, “by systematically sanctioning or closing gas deliveries from long-term, low cost pipelines to the EU, gas speculators via the Dutch TTP have been able to use every hiccup or energy shock in the world, whether a record drought in China or the conflict in Ukraine, to export restrictions in the USA, to bid the EU wholesale gas prices through all bounds.”

Translation: casino capitalism at its finest.

And it gets worse when it comes to electricity. There is a so-called EU Electricity Market Reform in progress. According to it, producers of electricity – from solar or wind – automatically receive “the same price for their ‘renewable’ electricity they sell to the power companies for the grid as the highest cost, i.e. natural gas.” No wonder the cost of electricity in Germany for 2022 increased by 860% – and rising.

Baerbock incessantly parrots that German energy independence cannot be secured until the country is “liberated from fossil fuels.”

According to Green fanaticism, to build the Green Agenda it’s imperative to completely eliminate gas, oil and nuclear power, which happen to be the only reliable energy sources as it stands.

And it’s here that we see the toxic trio Habeck/Baerbock/von der Leyen ready for their close up. They pose as saviors of Europe, preaching that the only way out is to invest fortunes in – unreliable – wind and solar power: the “answer” from Providence to a gas price debacle manufactured by none other than Big Finance, Green fanaticism and Eurocrat “leadership”.

Now, tell that to struggling pan-European households whose bills will surge to a whopping, collective $2 trillion as General Winter knocks on the door. 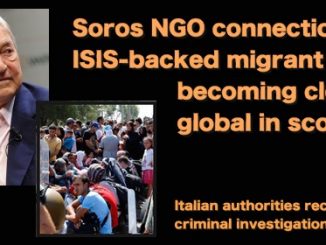 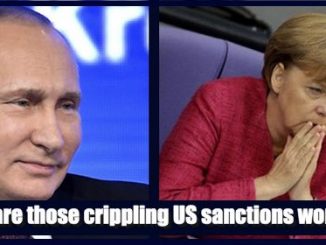 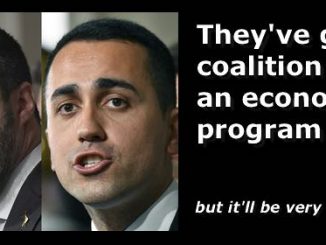