ER Editor: Dr. Michael Yeadon, former CEO of Pfizer, has been one of the most outstanding, educative voices throughout this whole non-pandemic. Here’s something he put out over the weekend, including information about a young UK doctor, Dr. Samuel White, whom Yeadon showcases.

Thanks as ever to Robin Monotti Graziadei for communicating Mike Yeadon’s valuable information. Yeadon has long since been banned on Big Tech media platforms.

Monotti’s Telegram channel is particularly worth following for the amazing amount of useful information he puts out.

CHECK OUT THE VIDEO OF DR. SAMUEL WHITE HERE 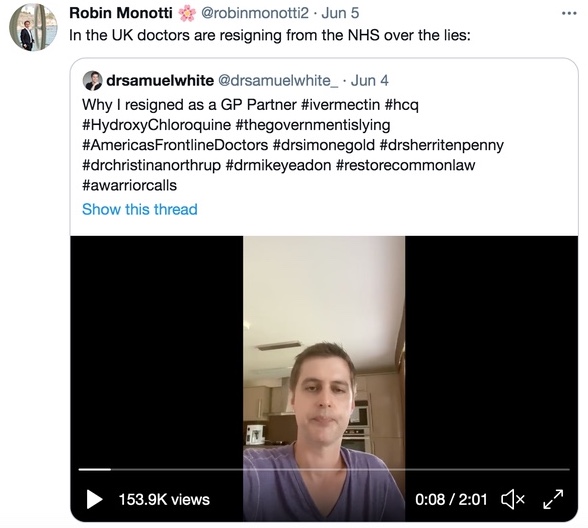 A very courageous doctor, a general practitioner/ family doctor of 17 years standing & a co-owner of a medical practise. Lost it all but I trust he now sleeps better. I salute this young doctor.

Of particular note, I was delighted to hear him say that the reason he resigned, as “the only thing I could do”, was “because of the lies”.

I’ve said over & again, what’s happening here isn’t the result of scientific debate & decisions made in uncertainty. Instead, everything we’re being told is LIES.

The virus is much less dangerous than we were told & there was a great deal of prior immunity. After 16mo, this highly contagious infection will have visited every community more than once. Thus the herd immunity threshold has long been passed, before vaccination started.

Transmission from those *without symptoms is rare to non existent.

Masks were long known not to reduce transmission of respiratory viruses & in any case not needed (see *above).

PCR as deployed is utterly untrustworthy, yielding a great mass of false positives & the false positive rate was NEVER determined. This hugely exaggerated the numbers asserted to have died “with covid19”. Others were killed through deprivation of healthcare & the love of their families.

Mass testing of the well is superfluous (see *above).

Lockdown doesn’t reduce epidemic spreading because the required symptomatic sources were misfit unwell & not out and about. Instead, transmission occurred in institutions not impacted by lockdown, which had ONLY negative effects.

Variants are all so similar to the original virus that there is absolutely no possibility of immune escape. Theoretically & empirically shown. Yet international borders are closed on the basis that they must be kept out. Wrong: they form in situ during replication.

Covid19 vaccines should not have been granted EUAs, because there are good treatments. We’ve no long term safety data. Literally almost anything could happen. No reproductive toxicology & no paediatric Tox studies either. No clinical experience in healthy comorbids yet all these are being vaccinated or lived up to be. All these novel technology vaccines cause our cells to make virus spike protein & this triggers blood coagulation. At least 50 times the typical (very low) rate of deaths after vaccination are recorded on VAERS, 2/3rds of which are consistent with a thromboembolic origin.

Vaccine passports are stupid. They add nothing to safety. If you’re vulnerable & have been vaccinated, you’re protected & do not need to know anyone else’s immune status.

Someone wants you, your children & grandchildren to be vaccinated. Even if you’re at no risk from this virus.

Whoever is driving this, note that scores of countries simultaneously threw away their pandemic preparedness plans & adopted the same set of lies. Crisp evidence of an international conspiracy. No benign interpretation links all these observations.

Thus we are logically forced to consider malign interpretations. Do you not find it odd that the economy is being destroyed & civil society crushed? Isn’t it bizarre that borders are all but closed? And that useless VaxPass is supposedly the route back to normality, yet this year, with every vulnerable person double vaccinated, the constraints in us are much stronger than last year without vaccines?

The perpetrators of this unprecedented global crime have no intention of giving you back your freedoms.

We all must seize them back & withdraw consent to this mockery of a method to protect the population. The virus has long gone, it’s summer & not a single one of these ‘measures’ are needed.

Take back your free lives right now. If you don’t, the future is very dark indeed.

Enabled by VaxPass, tyrannical Control of everyone falls to those controlling the database & algorithms. There is NO WAY BACK from activation of VaxPass. The EU is just weeks from this situation.

“How Bad is my Batch”? Check It Out Now

2 Comments on Dr. Mike Yeadon Continues as a Force for Truth