ER Editor: We are well aware of the neoconservative slant of the Gatestone Institute, which tends to obsess over things to do with Muslims, Islam and their countries. The problem of integration of large numbers of immigrants, however, is a very real concern for all developed nations now, no matter what the immigrants’ culture and country of origin are. The sheer volume (and changing demographics) is of major concern. One obvious option, therefore, is to simply say ‘stop it – put a halt to further immigration until citizens get to have their say.’ Note that these TWO options (a) stopping immigration; b) getting a democratic vote on it) are not being mentioned here as possible solutions.

Denmark: How to Deal with Integration?

Earlier this year, in his New Year’s speech, Denmark’s prime minister at the time, Lars Løkke Rasmussen, mentioned that religious parallel societies constitute a problem and that immigrants need to learn to “put secular laws over religious ones”.

What, however, if, in the community involved, there seems no desire to do that?

“When I was in high school”, Rasmussen continued “there were around 50,000 people with a non-Western background in Denmark. Today, there are almost half a million. In one generation, our country has changed”.

Just how great are the problems was revealed in a recent survey, Integrations Barometer 2018, published by the municipality of Copenhagen. The Integration Barometer — which measures the degree of integration in the municipality among young people with a non-Western background — showed that almost one third of 18-29 year-olds (31%) believe that “religious and cultural laws must be adhered to, even though they may be contrary to [Danish] law”.[1] The issue, then, is whether these young people believe that Islamic sharia law should take precedence over Danish law. The statistic represents an increase from 2016, when a similar survey showed that 24% wanted sharia law. In addition, the number of youths who view democracy in a positive light has fallen from 86% in 2016 to 79% in 2018[2].

“It worries me a lot that an increasing number of young Copenhageners do not support our democracy”, said Cecilia Lonning-Skovgaard, Copenhagen’s Mayor of Integration and Employment, to TV 2 Lorry.

“I also think that it shows a general tendency for young people to question democracy, and that there are some environments in a big city like Copenhagen that draw the young people into another direction and try to influence them in a bad way”.

Those “environments” may have been unwittingly helped on their way by the Danish authorities themselves.

It recently came to light, for instance, that a committee under the government’s Ministry of Church Affairs, which is responsible for formally approving mosques[3] in Denmark, was handing out approvals for them without knowing “whether they [the mosques] were governed from abroad, whether women’s rights were suppressed, or there were other problematic conditions”. Formal approval of a mosque means that the mosque becomes eligible for tax benefits and is permitted to bring foreign preachers to Denmark on a special visa. 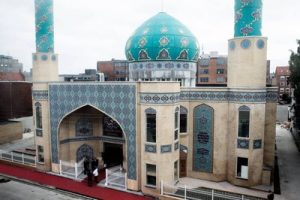 The Imam Ali Mosque (pictured), which opened in 2015 and is the largest in Denmark – it was built with 2 minarets 32 meters tall and with room for 1,500 people, at a cost of 80 million Danish kroner ($1,800,000; 1,600,000 euros) — has been at the center of the debate. The Danish newspaper Jyllands-Posten recently revealed that, when, in 2002 the association behind the mosque, Ahlul Bait, asked to be approved as a religious community, it had in its statutes a provision saying it operated under the supervision of Iran’s ‘Supreme Leader’, Ayatollah Ali Khamenei. At first, this news was a matter of concern for the Ministry of Church Affairs, but then Ahlul Bait simply rewrote its statutes and the ministry gave its approval.

One former member of the committee, law professor Jens Elo Rytter, who served on it from 2013 to 2017, left it in protest. “I sat with a clear feeling that the associations had just made their paperwork so that the formalities were in order. But in reality we had no way of knowing what really happened” he told Danish newspaper Jyllands-Posten.

“In fact,” said the committee’s long-standing president, Professor Emeritus Armin W. Geertz, “we often saw that passages were deleted, and we simply had the feeling that some of the organizations only changed their statutes to make them fit our requirements.” He emphasized that he also left the committee because the Ministry of Church Affairs would not impose a legal requirement officially recognizing that communities must comply with the principles of equality and democracy in their associations.

The Minister of Church and Culture, Mette Bock, told Jyllands-Posten that the Law on Religious Communities, which was amended in 2017, contains new requirements for transparency. Among other conditions, officially recognized religious communities must now submit annual financial statements.

This new requirement, however, might be an instance of too little, too late. Recently, the Imam Ali Mosque refused to distance itself from an Iranian imam, Mansour Leghaei, who for years was associated with it, and preached there, but in 2018, was prohibited entry into Denmark for two years: he had written on a Shia Muslim website that men beating their wives and children could be justified and that marital rape does not constitute rape.

The leader of the Imam Ali Mosque, Mohammad Khani, responded, “He has never called for breaking the law in Denmark, or called for violence”.

In 2016, Denmark introduced various initiatives against religious preachers who sought to “undermine Danish laws and values and who support parallel legal systems”. One of those initiatives criminalized speech in Danish mosques that condones violence and rape. “This,” said the Minister of Church and Culture, Bertel Haarder, at the time, “will have an impact on what people put up with from their religious leaders.”

What Haarder apparently failed to consider was that “people” might not disagree with their “religious leaders” and would therefore be happy to “put up” with sermons and teachings that in fact actually do go against Danish laws and values.

In response to a parliamentary question about the refusal of the Imam Ali Mosque to distance itself from the sermons endorsing marital violence and marital rape, the Minister for Immigration and Integration Inger Støjberg, said:

“I have said on several occasions that I would like to see that there were mosques that were closed in Denmark, namely mosques that are driven by a world view that is just so distant from the Danish [world view], as this case… shows. But the problem with that… [is] where do these people go? Do we have more control over them here than we have if they run a mosque from a backyard or basement? We cannot shut them down for their views [holdninger]. That is why I think that one of the best ways must be to get the donations [to the mosques] under control… I could wish that there were mosques that were closed here in Denmark. The problem is just what the next step is, whether the views will still thrive. I am concerned that they will.”

The Imam Ali Mosque’s refusal to distance itself from the problematic imam, exemplifies the difficulties with which Western societies are struggling …

[3] In 2006, there were 115 mosques in all of Denmark. By the end of 2017, that number had increased to approximately 170 mosques in total — an increase of nearly 50% in little more than a decade. It is unclear, how many of those mosques have been formally approved by the Ministry of Church Affairs. 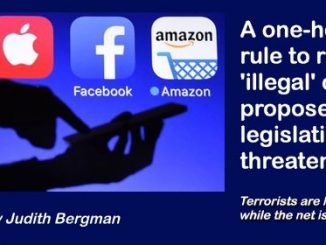 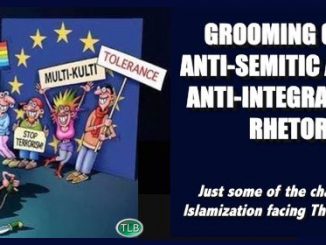 Does The Netherlands Have a Problem?