ER Editor: We also recommend this May 2020 report by Vanessa Beeley detailing potential conflicts of interest for Vallance, Matt Hancock and Chris Witty – COVID–19: The Big Pharma players behind UK Government lockdown. Of note in relation to Vallance, who was head of R&D at GSK before entering government as an advisor:

While Vallance and the UK Government are favouring AstraZeneca — in partnership with Oxford University — to fast-track vaccine development, GSK is also in the race.

GSK is working in collaboration with the Coalition for Epidemic Preparedness Innovations (CEPI), “aimed at helping the global effort to develop a vaccine” for Covid–19. The UK Government has invested £50 million in CEPI to support the rapid vaccine and immunoprophylactic development against “unknown pathogens” (also referred to as Disease X). Bill Gates was one of the original and most influential sponsors of CEPI; more details later in this article.

So, the UK Government appears to favour AstraZeneca, but Vallance and the government also appear to be subtly supporting Vallance’s former employer, GSK, despite their Pandemrix fiasco.

While Vallance was in charge of research and development at GSK, collaboration with the Bill and Melinda Gates foundation was increased. In 2013, a new parnership between GSK and the Gates Foundation was announced: to “accelerate research into vaccines for global health needs”.

What we start to see here is the very definition of a revolving-door policy between philanthrocapitalism, Big Pharma and government agencies, all effectively working in lock-step to promote the global immunisation agenda, with massive projected profit for the Big Pharma complex …

Sir Patrick Vallance has a £600,000 shareholding in a pharmaceuticals giant which is racing to develop a Covid vaccine for the Government, a report has revealed.

The Chief Scientific Adviser holds the deferred bonus of 43,111 shares in GlaxoSmithKline (GSK) from his time as president of the multinational company.

Sir Patrick has already sold more than £5 million in shares he received during his tenure from 2012 to 2018, when he was appointed by the Government.

Accounts seen by the Telegraph show that Sir Patrick held 404,201 GSK shares when he resigned, worth £6.1 million at today’s price.

Sir Patrick, who also chairs the Government’s expert panel on vaccines, predicted at a news conference this week that the first effective doses of a jab might become available on a limited basis by the end of this year.

GSK is one of more than 20 drugs companies around the world in the race to provide the cure for coronavirus – an achievement which would be colossally lucrative.

Sir Patrick’s former employer has deals with the British and US governments to supply them with Covid-19 vaccines, subject to terms in a final contract.

A senior Conservative MP and ex-Cabinet minister told The Telegraph that Sir Patrick should have declared his stake in GSK.

‘The policy of this Government is to try to suppress Covid at every opportunity until we get a vaccine,’ the MP said.

‘That makes it more likely that a vaccine will be prioritised by the Government and he happens to be holding shares in one of the leading companies that are developing it. It is a potential conflict of interest.

‘If he is making decisions on vaccines and advising the Government on them, then he either needs to divest himself of the shares or make a declaration every time he touches on the subject. In the Commons, every time MPs raise an issue in which there is a registered interest, they have to declare it. Every time he is talking about vaccines or on TV, he should put it on the table.’

It was unclear if Sir Patrick did in fact declare his interest at any stage. MailOnline has contacted him seeking clarification.

The Government said that Sir Patrick holds a deferred share bonus which will mature in April 2021 but declined to comment on the size of the holding or its value. 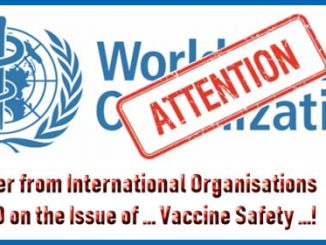 No Jab, No Job: GMC Threatens Doctors With Disciplinary Action For Declining Vaccine

McKinseyGate: France’s Shadow Government and the Rise of the Corporate State