Behind the Tin Curtain: BRICS+ vs NATO/G7

The west is nostalgically caught up with outdated ‘containment’ policies, this time against Global South integration. Unfortunately for them, the rest of the world is moving on, together.

Once upon a time, there existed an Iron Curtain which divided the continent of Europe. Coined by former British Prime Minister Winston Churchill, the term was in reference to the then-Soviet Union’s efforts to create a physical and ideological boundary with the west. The latter, for its part, pursued a policy of containment against the spread and influence of communism.

Fast forward to the contemporary era of techno-feudalism, and there now exists what should be called a Tin Curtain, fabricated by the fearful, clueless, collective west, via G7 and NATO: this time, to essentially contain the integration of the Global South (ER: Escobar has expanded the meaning of this term).

The most recent and significant example of this integration has been the coming out of BRICS+ at last week’s online summit hosted by Beijing. This went far beyond establishing the lineaments of a ‘new G8,’ let alone an alternative to the G7.

– Russia will fulfill its obligations to supply energy and fertilizers.

– Russia expects a good grain harvest – and to supply up to 50 million tons to world markets.

– Russia will ensure passage of grain ships into international waters even as Kiev mined Ukrainian ports.

– The negative situation on Ukrainian grain is artificially inflated.

– The sharp increase in inflation around the world is the result of the irresponsibility of G7 countries, not Operation Z in Ukraine.

– The imbalance of world relations has been brewing for a long time and has become an inevitable result of the erosion of international law.

Putin also directly addressed one of the key themes that the BRICS have been discussing in depth since the 2000s — the design and implementation of an international reserve currency.

“The Russian Financial Messaging System is open for connection with banks of the BRICS countries.”

“The Russian MIR payment system is expanding its presence. We are exploring the possibility of creating an international reserve currency based on the basket of BRICS currencies,” the Russian leader said.

This is inevitable after the hysterical western sanctions post-Operation Z; the total de-dollarization imposed upon Moscow; and increasing trade between BRICS nations. For instance, by 2030, a quarter of the planet’s oil demand will come from China and India, with Russia as the major supplier.

The “RIC” in BRICS simply cannot risk being locked out of a G7-dominated financial system. Even tightrope-walking India is starting to catch the drift.

Who speaks for the ‘international community?’

Sergey Storchak, CEO of Russian bank VEG, framed it quite diplomatically: “If the voices of emerging markets are not being heard in the coming years, we need to think very seriously about setting up a parallel regional system, or maybe a global system.”

A “parallel regional system” is already being actively discussed between the Eurasia Economic Union (EAEU) and China, coordinated by Minister of Integration and Macroeconomics Sergey Glazyev, who has recently authored a stunning manifesto amplifying his ideas about world economic sovereignty.

What happens in the trans-Eurasian financial front will proceed in parallel with a so far little known Chinese development strategy: the Global Development Initiative (GDI), announced by President Xi Jinping at the UN General Assembly last year.

GDI can be seen as a support mechanism of the overarching strategy – which remains the Belt and Road Initiative (BRI), consisting of economic corridors interlinking Eurasia all the way to its western peninsula, Europe.

At the High-level Dialogue on Global Development, part of the BRICS summit, the Global South learned a little more about the GDI, an organization set up in 2015.

In a nutshell, the GDI aims to turbo-charge international development cooperation by supplementing financing to a plethora of bodies, for instance the South-South Cooperation Fund, the International Development Association (IDA), the Asian Development Fund (ADF), and the Global Environment Facility (GEF).

Priorities include “poverty reduction, food security, COVID-19 response and vaccines,” industrialization, and digital infrastructure. Subsequently, a Friends of the GDI group was established in early 2022 and has already attracted over 50 nations.

BRI and GDI should be advancing in tandem, even as Xi himself made it clear during the BRICS summit that “some countries are politicizing and marginalizing the developmental agenda by building up walls and slapping crippling sanctions on others.”

Then again, sustainable development is not exactly the G7’s cup of tea, much less NATO’s. (ER: oh, the irony)

Seven against the world

The avowed top aim of the G7 summit in Schloss Elmau at the Bavarian Alps is to “project unity” – as in the stalwarts of the collective west (Japan included) united in sustainable and indefinite “support” for the irretrievably failed Ukrainian state.

That’s part of the “struggle against Putin’s imperialism,” but then there’s also “the fight against hunger and poverty, health crisis and climate change,” as German chancellor Scholz told the Bundestag.

In Bavaria, Scholz pushed for a Marshall Plan for Ukraine – a ludicrous concept considering Kiev and its environs might as well be reduced to a puny rump state by the end of 2022. The notion that the G7 may work to “prevent a catastrophic famine,” according to Scholz, reaches a paroxysm of ludicrousness, as the looming famine is a direct consequence of the G7-imposed sanctions hysteria.

The fact that Berlin invited India, Indonesia, South Africa and Senegal as add-ons to the G7, served as additional comic relief.

The Tin Curtain is up

It would be futile to expect from the astonishing collection of mediocrities “united” in Bavaria, under de facto leader of the European Commission (EC), Fuehrer Ursula von der Leyen, any substantial analysis about the breakdown of global supply chains and the reasons that forced Moscow to reduce gas flows to Europe. Instead, they blamed Putin and Xi.

Welcome to the Tin Curtain – a 21st century reinvention of the Intermarium from the Baltic to the Black Sea, masterminded by the Empire of Lies, complete with western Ukraine absorbed by Poland, the Three Baltic Midgets: Bulgaria, Romania, Slovenia, Czechia and even NATO-aspiring Sweden and Finland, all of whom will be protected from “the Russian threat.”

An EU out of control

The role of the EU, lording over Germany, France and Italy inside the G7 is particularly instructive, especially now that Britain is back to the status of an inconsequential island-state.

As many as 60 European ‘directives’ are issued every year. They must be imperatively transposed into internal law of each EU member-state. In most cases, there’s no debate whatsoever.

Then there are more than 10,000 European ‘rulings,’ where ‘experts’ at the European Commission (EC) in Brussels issue ‘recommendations’ to every government, straight out of the neoliberal canon, regarding their expenses, their income and ‘reforms’ (on health care, education, pensions) that must be obeyed.

Thus elections in every single EU member-nation are absolutely meaningless. Heads of national governments – Macron, Scholz, Draghi – are mere executants. No democratic debate is allowed: ‘democracy,’ as with ‘EU values,’ are nothing than smokescreens.

The real government is exercised by a bunch of apparatchiks chosen by compromise between executive powers, acting in a supremely opaque manner.

The EC is totally outside of any sort of control. That’s how a stunning mediocrity like Ursula von der Leyen – previously the worst Minister of Defense of modern Germany – was catapulted upwards to become the current EC Fuhrer, dictating their foreign, energy and even economic policy.

What do they stand for?

From the perspective of the west, the Tin Curtain, for all its ominous Cold War 2.0 overtones, is merely a starter before the main course: hardcore confrontation across Asia-Pacific – renamed “Indo-Pacific” – a carbon copy of the Ukraine racket designed to contain China’s BRI and GDI.

As a countercoup, it’s enlightening to observe how the Chinese foreign ministry now highlights in detail the contrast between BRICS – and BRICS+ – and the imperial AUKUS / Quad / IPEF combo.

It would be misguided to expect those G7 luminaries gathered in Bavaria to understand the absurdity of imposing a price cap on Russian oil and gas exports, for instance. Were that to really happen, Moscow will have no problems fully cutting energy supply to the G7. And if other nations are excluded, the price of the oil and gas they import would drastically increase.

So no wonder the future is ominous. In a stunning interview to Belarus state TV, Russian Foreign Minister Sergei Lavrov summarized how “the west fears honest competition.”

Hence, the apex of cancel culture, and “suppression of everything that contradicts in some way the neoliberal vision and arrangement of the world.” Lavrov also summarized the roadmap ahead, for the benefit of the whole Global South:

“We don’t need a new G8. We already have structures…primarily in Eurasia. The EAEU is actively promoting integration processes with the PRC, aligning China’s Belt and Road Initiative with the Eurasian integration plans. Members of the Association of Southeast Asian Nations are taking a close look at these plans. A number of them are signing free trade zone agreements with the EAEU. The Shanghai Cooperation Organization is also part of these processes… There is one more structure beyond the geographic borders of Eurasia.”

“It is BRICS. This association is relying less and less on the Western style of doing business, and on Western rules for international currency, financial and trade institutions. They prefer more equitable methods that do not make any processes depend on the dominant role of the dollar or some other currency. The G20 fully represents BRICS and five more countries that share the positions of BRICS, while the G7 and its supporters are on the other side of the barricades.”

“This is a serious balance. The G20 may deteriorate if the West uses it for fanning up confrontation. The structures I mentioned (SCO, BRICS, ASEAN, EAEU and CIS) rely on consensus, mutual respect and a balance of interests, rather than a demand to accept unipolar world realities.”

Moscow Declares “No Relations” With EU As Brussels Has Unilaterally “Destroyed” Ties, China a Different Story 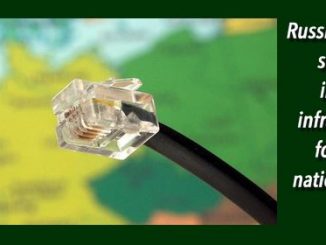 Russia to launch an ‘independent internet’ for BRICS nations – report 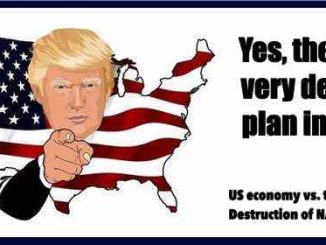 Meyssan: What Donald Trump Is Preparing For