The people have had enough. At least six BBC buildings across the UK were covered with placards and photos of people who died from the COVID vaccine.

The rally called the “media is the virus” was held on Saturday, January 7th, and it was organized by three different groups: The People’s Resistance, Freedom Fighters, and The North Unites.

“The BBC are traitors to our country,” according to a post on Telegram. “All mockingbird media are traitors to everyone’s country and have been for a very long time,” the post continued.

On the topic of revealing the truth, readers may be interested in this piece:

The War is Hotting Up

People want the truth about the experimental COVID “vaccines”

Video footage from the UK shows hundreds of stickers symbolizing loved ones believed to have been killed by the experimental injections, plastered all over the windows of the BBC’s London studios.

Stickers of the dead caused by the jabs are posted on windows of the BBC… pic.twitter.com/i8AqHkIX9V

Several of the stickers were merged into the phrases “Tell the truth” and “Jabs Kill”.

A banner hanging in front of the building also says: “BBC is the virus!”.

The BBC – along with the rest of the corporate media – has followed official government narratives from the start of the pandemic to scare the public about COVID, refusing to report anything off script and demonizing anyone who questioned the lockdowns, the vaccines or the official story about the origin of the virus.

Many social media users praised the act of protest and called for more peaceful and vigorous demonstrations like this one to spread to the US and Canada and to doctors’ offices and hospitals.

This ought to be done in every town and city throughout the U.K.

What a wonderful way to communicate

Should start posting them on hospitals and doctors offices.

This needs to be done worldwide; US, Canada, UK and everywhere!

crime against humanity, aided by the corrupt BBC

This is because the number of deaths in the UK has exploded since 2021, with most of the COVID deaths now being among those vaccinated. 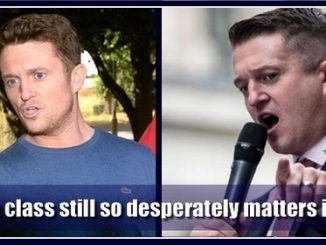 First They Came for Tommy … 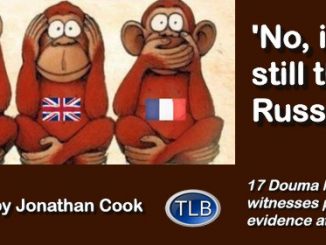 The West closes its ears to Douma witness testimony