ER Editor: As with the first UK vaccine, it was an elderly lady who was the first guinea pig in France yesterday. Because that’s all she can be called. Informed consent and human dignity just went out the window. Twitter reaction was pretty prompt after one Mauricette got her vaccine live on camera.

Former presidential candidate of the UPR Party, Francois Asselineau said it best (Twitter), a tweet which contains a short video that’s worth watching even if you can’t understand the French:

Translation: The media are advertising Mauricette, 78 years old, the first French to get vaccinated with the mRNA Pfizer vaccine. But they hide the fact that she didn’t know she was going to be the first! We hear her in effect say at the 8 second mark, ‘Ah? I need a vaccine?’ That’s called an abuse of the weak. (ER: Which is a criminal act under French law …) 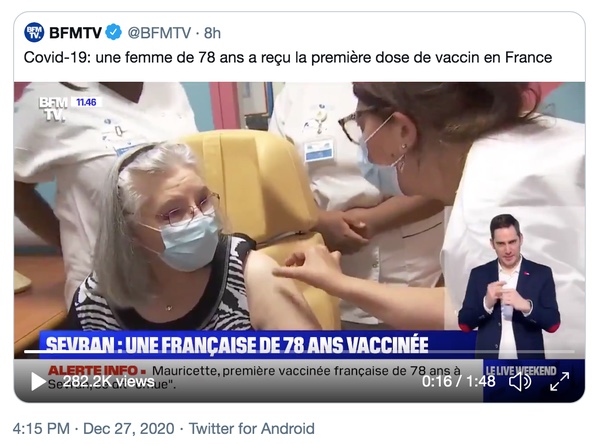 In passing, French broadsheet Le Figaro tweeted a poll question yesterday, too, and an even bigger number of French than before (60%) say they will NOT be getting the vaccine (although this result is skewed according to the readership of Le Figaro):

Translation: Your Opinion – Are you going to get vaccinated against Covid-19?

Robin Monotti tweeted out yesterday about Italian employees in care homes refusing the vaccine. The article he cites is behind a paywall: 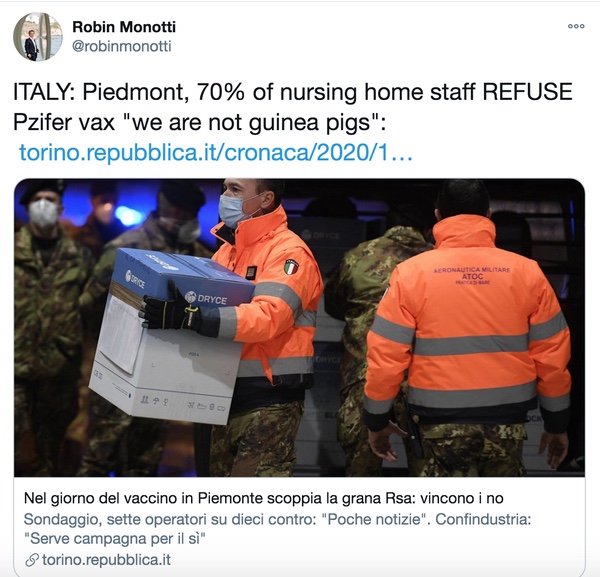 Covid-19: A 78-year-old woman received her first dose of Pfizer/BioNTech vaccine in France

A 78-year-old woman was the first person in France to be vaccinated against Covid-19 at the René-Muret hospital in Sevran (Seine-Saint-Denis). The government has set a goal of one million vaccinated older people by the end of February.

“I am moved,” said Mauricette on December 27, 2020. This former household helper was the first to be vaccinated in France, at around 11 am in the long-term care unit of the René-Muret hospital in Sevran.

“Things are heating up!”, launched this former inhabitant of Le Bourget after receiving the injection of the vaccine developed by the American Pfizer and the German BioNTech. A 65-year-old cardiologist, Jean-Jacques Monsuez, was then vaccinated shortly before 11:20 am.

About twenty elderly people and caregivers are scheduled to receive the ‘Comirnaty’ vaccine at this symbolic launch of the French vaccination campaign, in Sevran and then at the geriatric center in Champmaillot, part of the Dijon University Hospital.

The government has set a target of one million of the oldest and most vulnerable, individuals and caregivers in the 7,000 EHPAD (ER: old people’s homes) and other related facilities to be vaccinated by the end of February.

(ER: We have questioned official government statistics on this virus since the beginning across the board. We have no confidence in the figures that follow, therefore, especially as nobody seems to be getting flu anymore.) In total, the coronavirus epidemic has caused 62,427 deaths in France, including 159 in the last 24 hours, according to data provided by the authorities on December 25. In detail, 112 new patients were admitted to intensive care within 24 hours (compared to 186 on December 24). 2,616 Covid-19 patients are currently hospitalized in intensive care, according to data from Public Health France.

7 Die at Spanish Care Home After 1st Dose Of Pfizer