We strongly recommend Gilad Atzmon’s latest piece on the hatchet job the UK Jewish Lobby – in cohoots with members of the Labour Party, including Corbyn’s movement Momentum – tried to do on him, and against other Labour Party members. It is truly astonishing. See The Most Dangerous Political Party in Europe?

Having won a landslide victory in the UK parliamentary elections campaigning on ‘getting Brexit done,’ the Conservatives now plan to outlaw boycotts of Israel as one of their first steps when Parliament reconvenes.

When Queen Elizabeth II delivers the speech drafted by Prime Minister Boris Johnson to Parliament on Thursday, she will mention the plan to ban UK public agencies from working with anyone who supports the boycott, divestment and sanctions (BDS) of Israel, Lord Eric Pickles told a conference in Jerusalem on Sunday.

“BDS is anti-Semitic, and should be treated as such,” said Pickles, who is the UK Special Envoy for post-Holocaust matters as well as the parliamentary chairman of the lobbying group Conservative Friends of Israel (CFoI). 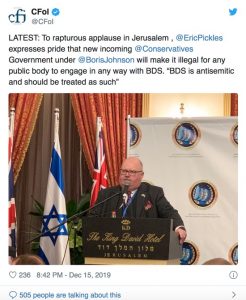 “Israel exists because it can defend its borders, and it’s people. It is the only place in this region in which governments are elected. It is a civilised, decent place and I’m very proud it exists,” Pickles said at the International Institute for Strategic Dialogue conference. He also described himself as “an unapologetic, unreformed Zionist.”

Last week, Conservatives trounced Labour and Liberal Democrats in a snap election, delivering Johnson a decisive parliamentary majority. Labour supporters have argued that a media campaign unjustly accusing their leader Jeremy Corbyn as an anti-Semite hurt them with the voters.

Johnson and the Tories campaigned on the simple message that they would “get Brexit done” and take the UK out of the EU, after years of futile back-and-forth. However, Pickles how seems to have embraced the narrative that the election was really a referendum on anti-Semitism, telling the conference that “the British people said that you can be an anti-Semite but you will not be elected and you will not be in government.”

Pickles is not just some random official, either. He was chairman of the Conservative Party in 2009-2010, and secretary of state for communities and local government until 2015, when he was appointed as special envoy. In 2018, he was nominated by Tory PM Theresa May for life peerage and became Baron Pickles of Brentwood and Ongar.

The Tories’ anti-BDS proposal closely mirrors the executive order issued last week by US President Donald Trump, adopting the definition of anti-Semitism established by the International Holocaust Remembrance Alliance (IHRA) in 2016. This now includes even “rhetorical” manifestations of anti-Jewish sentiments.

With such a standard in place, academic institutions who support or even tolerate the BDS movement face losing federal funding and being accused of discrimination under federal statutes prohibiting discrimination based on “race, color or national origin.”

Israel already prohibits anyone involved BDS from entering the country, and recently enforced that ban by expelling a Human Rights Watch official who had backed BDS in a previous job. Free speech advocates in the US say that BDS bans would have a chilling effect on constitutionally guaranteed freedom of expression.

After an election dogged by the weaponization of anti-Semitism, the victorious UK conservative party has announced a new legislative push that would prevent the public sector from working with any individual or organization that supports a boycott of Israel’s government.

JERUSALEM — Following the results of the recent UK election, the victorious Conservative party has now declared their intention to make it illegal for public institutions in the country to support non-violent boycotts of the state of Israel in any capacity.

On Sunday, the UK Special Envoy for post-Holocaust matters, Lord Eric Pickles, gave a speech in Jerusalem at the International Institute for Strategic Dialogue conference, where he made the Conservatives’ motives clear. Pickles, whose speech garnered “rapturous applause” from conference attendees, stated that the public sector would soon be banned from associating in any way with the Boycott Divest Sanctions (BDS) movement, which uses non-violent means to pressure Israel to follow international law with regards to its military occupation of Palestine and blockade of the Gaza Strip.

The coming ban, as described by Pickles, is set to prohibit government bodies and organizations from supporting BDS in any fashion, which would also prevent them from employing or working with anyone who supports boycotting the Israeli state. Pickles went on to say the reason for the ban is that BDS itself is anti-Semitic (despite BDS having numerous Jewish supporters), stating:

BDS is anti-Semitic, and should be treated as such. Anti-Semitism is an attack on the British way of life and British identity. Without our Jewish citizens, we would be a lesser nation.” 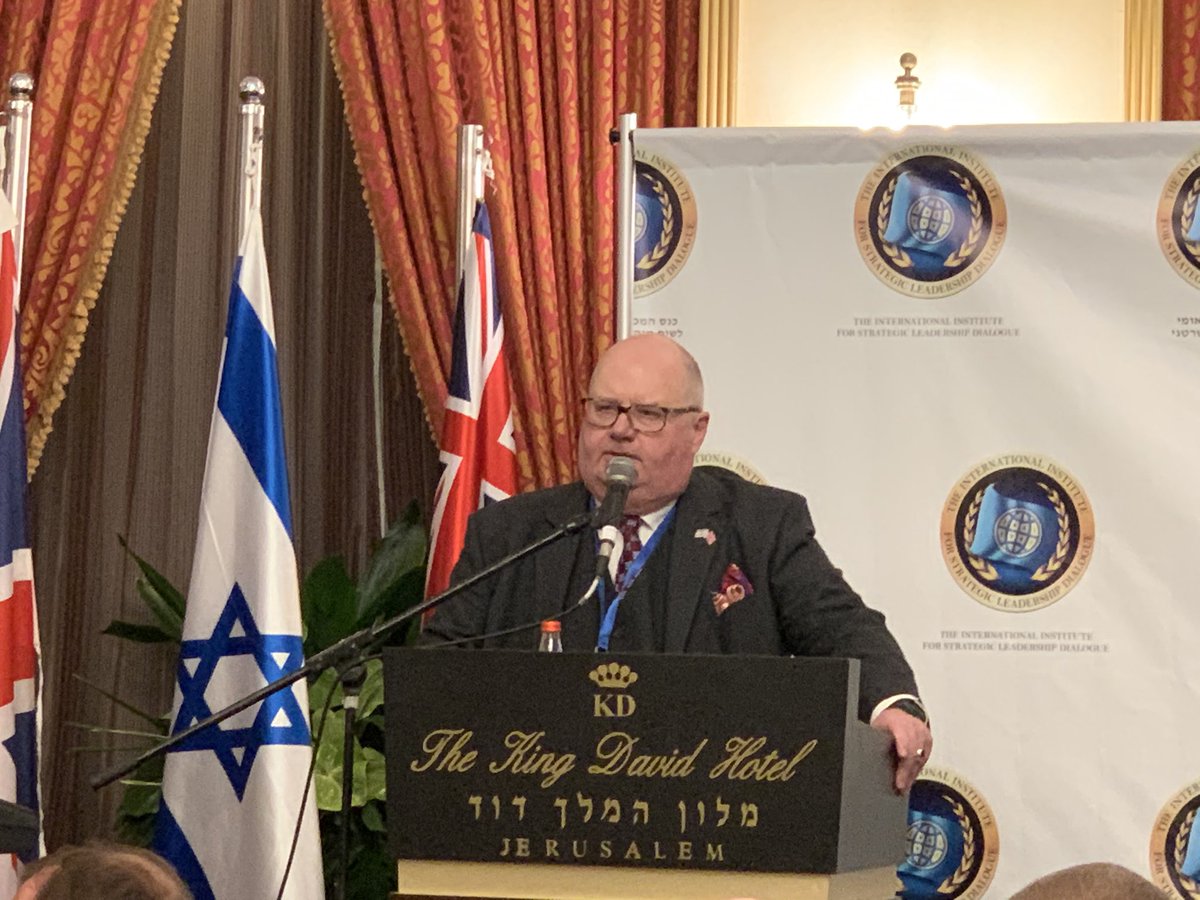 Pickles also made it clear that he conflates Judaism with Zionism, a move that was recently made law in the United States through an executive order signed by President Trump that reclassifies Judaism as a race and nationality as opposed to a religion. Regarding his personal support for Israel, Pickles did not mention Judaism at all, instead championing Zionism and Israel’s ability to “defend its borders.” He referred to himself as “an unapologetic, unreformed Zionist,” before adding that “Israel exists because it can defend its borders, and its people. It is the only place in this region in which governments are elected. It is a civilized, decent place and I’m very proud it exists.” Pickles has previously called Israel a “bastion of democracy.”

The planned ban on BDS is only the latest attempt by the Conservative party to inhibit non-violent efforts aimed at pressuring Israel to comply with international law. The first such attempt took place in 2016 when Conservative MP Matthew Hancock traveled to Jerusalem and announced the Conservatives’ intention to ban boycotts of Israel at a joint press conference with Israeli Prime Minister Benjamin Netanyahu. However, those attempts failed largely thanks to the U.K. Supreme Court, which prevented an attempted ban in 2016. Since that ruling, the fight to force a nationwide BDS ban has been the subject of ongoing court cases.

Yet, with the Conservatives now set to have a sizeable Parliamentary majority, legislative changes that would enable such a ban and circumvent the ongoing court battles to do so appear to be just over the horizon. Indeed, in their manifesto for this past election, the Conservatives’ promised to ban “boycotts, disinvestment or sanctions campaigns against foreign countries” if elected, although the manifesto did not mention any foreign country by name.

In his speech, Pickles also attempted to justify the coming legislative push to outlaw BDS by claiming that it was what UK voters had sought by choosing the Conservatives over the Labour Party. Labour Party leader Jeremy Corbyn, a long-time activist for Palestinian rights, had been targeted by a massive and relentless smear campaign in the UK, Israel and U.S. media as anti-Semitic for his criticisms of Israel’s government. Pickles’ speech alluded to this effort by asserting that the recent election was essentially a national referendum on anti-Semitism. He specifically stated that, “at 10pm last Thursday, the British people said that you can be an anti-Semite but you will NOT be elected and you will NOT be in government,” before adding that “anti-Semitism is not just a Jewish concern, it is a concern for all of us.”

While Pickles implied that UK voters had abandoned Labour over charges related to alleged antisemitism in the party, most political analysts have noted that the reason for Labour’s resounding defeat was related to its position on Brexit, as opposed to its other policies and concern over bigotry within the Labour party. However, the smear campaign against Corbyn — even if it was not the deciding factor in the UK election — has now laid the foundation for what appears to be a litany of partisan, pro-Israel legislation that will soon be pushed through the coming Conservative-dominated Parliament. Indeed, Israeli media outlets have reported that the Conservatives’ post-Brexit policies will, among other things, involve stronger efforts by Prime Minister Boris Johnson to “tighten trade ties with Israel” as well as cooperation with the Israeli state on other matters.

The post-election tone regarding coming legislation is remarkably similar to that which occurred after last year’s midterm elections in the United States. After Congress was sworn in following the midterms, the first bill introduced by the Republican-majority Senate was titled “Strengthening America’s Security in the Middle East Act of 2019” and was also aimed at inhibiting BDS on a national level. That bill specifically provided Israel with $38 billion from the U.S. in defense spending over ten years and authorized state and local governments to boycott companies that support a boycott of Israel.

Whitney Webb is a MintPress News journalist based in Chile. She has contributed to several independent media outlets including Global Research, EcoWatch, the Ron Paul Institute and 21st Century Wire, among others. She has made several radio and television appearances and is the 2019 winner of the Serena Shim Award for Uncompromised Integrity in Journalism.

Merkel goes to Moscow: Agreement that Iran Nuclear Deal should be Preserved By All Means [VIDEO] 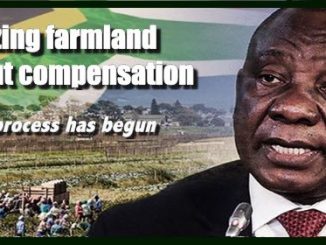