Trillions of Dollars in U.S. Military Spending Is Unaccounted For

Now, and for many decades past, the American public has displayed far higher confidence and trust in “The Military” than in any other “Institution” (including than churches, schools, the Presidency, the police, courts — any). 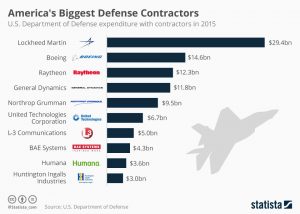 Here, from the list of the 100 largest, are the 20 largest recipients of U.S. federal government money:
http://www.bga-aeroweb.com/Top-100-Defense-Contractors-2015.html
1. Lockheed Martin Corp.
2. The Boeing Company
3. Raytheon Company
4. General Dynamics Corp.
5. Northrop Grumman Corp.
6. United Technologies Corp.
7. L-3 Communications Holdings Inc.
8. BAE Systems plc
9. Humana Inc.
10. Huntington Ingalls Industries Inc.
11. Bechtel Group Inc.
12. Health Net Inc.
13. Unitedhealth Group Inc.
14. SAIC Inc.
15. General Atomic Technologies Corp.
16. McKesson Corp.
17. Bell-Boeing Joint Project Office
18. AmerisourceBergen Corp.
19. Booz Allen Hamilton Holding Corp.
20. United Launch Alliance L.L.C.
As is obvious, all or almost all of these firms are contractors to (recipients of money from) the U.S. Department of Defense; and they may reasonably be presumed to be benefiting significantly from some of the unaccounted for payments from the U.S. DoD. However, if the money isn’t going to them, then where is it going? And why? And for what? Why is there no congressional investigation to answer these questions? And why are U.S. ‘news’ media not publicizing this matter so as to force such investigations? Are payoffs involved — payoffs for silence? Why are none of the ‘news’ media that have the resources to explore these questions publishing their own investigations into it, since Congress won’t investigate? And, since the Inspector General’s reports into these matters have had no impact, why isn’t the focus finally shifting away from studying to find out how much is missing toward, instead, prosecuting the people who — at the very least — failed to do what they were being paid to do: keep track of every cent of taxpayers’ money? If doing that job is too dangerous, then shouldn’t the people who are tasked to do it be paid more, so as to cover their exceptionally high personal risk? Is all of this secrecy really necessary in order to keep “The Military” way on top as the most respected of all institutions in the United States — even after all of the harms that the U.S. military has actually caused in Iraq, Libya, Syria, etc., destroying those countries and others? How much would the public’s respect for the military — the mass-killing institution — be brought down if the truth about it were known? Would the mass-killing institution deserve to be the most respected institution even if it weren’t so corrupt?
—————
Investigative historian Eric Zuesse is the author, most recently, of  They’re Not Even Close: The Democratic vs. Republican Economic Records, 1910-2010, and of  CHRIST’S VENTRILOQUISTS: The Event that Created Christianity. 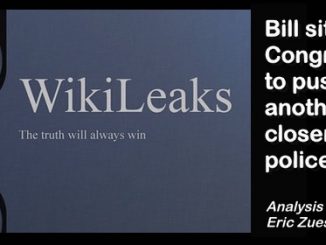 Bill in Congress to Fund CIA & NSA Will Outlaw Wikileaks