EDITOR’S NOTE: The name ‘Tommy Robinson’ is a made-up pseudonym, or a media persona used by Stephen Christopher Yaxley-Lennon. Other past fake names used by Robinson include “Paul Harris” and “Andrew McMaster.”

Anti-Muslim activist Tommy Robinson has been featured in a number of recent videos paid for by a Canadian-based, Jewish-owned neoconservative media outlet, The Rebel Media. In one recent video Robinson appears to be attempting to incite xenophobic outrage by openly accusing the Muslim residents in a Manchester neighborhood as being “enemy combatants.”

His secret meeting with the Jewish Community in Manchester has apparently sparked controversy with other Jewish activists. Jeremy Newmark (pictured), the chairman of the Jewish Labour Movement, explains, “There can be no space in our community for the politics of extremism and hate. British Jews stood firmly against the British Union of Fascists, the National Front and the BNP.”

However, Robinson has made no secret of the fact that he is committed Zionist – which may explain why members of the UK’s Jewish Community are now courting and supporting him:

More from the Independent… 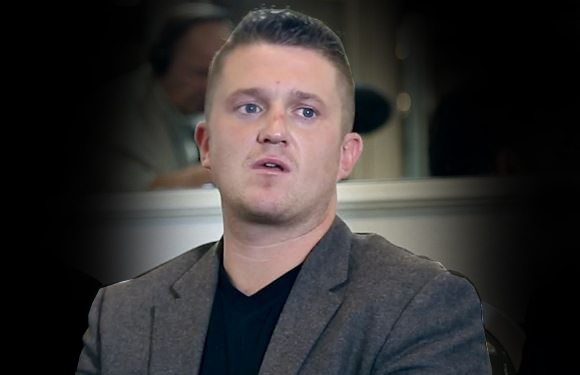 Tommy Robinson has met with members of Manchester’s Jewish community at a secretive event where he is believed to have outlined his extreme views on Islam in a speech.

The former English Defence League leader is said to have talked to around a dozen members in Prestwich, just outside Manchester city centre, until the early hours of last Thursday morning.

[According to his own Tweet, it appears that Robinson had collected money from the Jewish Community]

Mr Robinson mentioned the meeting on his Twitter account and claimed it was a charity fundraiser for the Amelia-Mae Foundation which supports people with Neuroblastoma.

According to the Jewish Chronicle, one community member said her friends had organised the meet-up but she would “take legal action” if her own name was linked to the event.

An additional source told the publication the meeting with the far-right campaigner, whose real name is Stephen Yaxley-Lennon, went on until “the early hours” of last Thursday morning.

Continue this story at The Independent

BNP founder Nick Griffin: ‘We were offered big money by Zionists in 2007 under two conditions: To attack Islam, and never criticize the banking system’