Western Cold War fever broke into beads of sweat this week with yet more doom-laden reports warning about Russia ‘winning the information war’. That’s a revealing way to look at journalism and news – as ‘warfare’.

But is Russia really winning an “information war”? Funny how you don’t ever hear Russian leaders speaking in those terms.

Or is it just a more prosaic matter of Russian news media providing a closer approximation to the truth on major world events than Western counterparts? 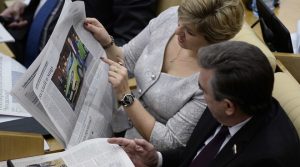 Then it added: “The West must step up its efforts to combat and counter the information war being waged by its opponents, according to NATO officials. They warn that countries like Russia are exploiting the freedom of the press in Western media to spread disinformation.”

In a separate report the US Director of National Intelligence James Clapper Jr sent members of Congress the summary of a new classified assessment on alleged Russian “information warfare”.

Going back to VOA, it quotes Edward Lucas, senior editor at The Economist, as saying that RT and Sputnik should not even be considered as legitimate news channels.

Lucas claims: “Russia has really grasped the post-truth environment. And they will lie about things absolutely brazenly. They understand the weaknesses of our media in the post-Cold War environment: that we prioritize fairness over truth.”

It’s not hard to see where this kind of logic is going: NATO, a military-security organization, is declaring that Western societies are under threat from Russian subversion; Western state intelligence services label specific Russian media threats; and Western media establishment figures lead public opinion to view said Russian outlets as “illegitimate”. The next short step is for Western governments to ban Russian news channels from the airwaves and internet – on the basis of “national security”.

The tunnel vision here is astounding. Western arrogance and self-righteousness is betrayed by such casual, deprecatory qualifiers of Russian channels as “state-owned” or “close to the Kremlin”. This week, for example, France 24’s media watch presenter James Creedon airily dismissed a report on the US elections published in Sputnik because “it is close to the Kremlin”.

What about France 24? The BBC? Or Deutsche Welle? Somehow these channels are not qualified as “state owned” or “close to Paris, London or Berlin” – even though they very arguably are.

Voice of America is also government-owned, but Western pundits don’t seem to have any qualms about its evidently pro-Washington bias.

No qualifications or qualms because Western establishment media – whether state-owned or private – assumes to be immanently “truthful” and “independent”. That assumption is based on arrogant delusion. 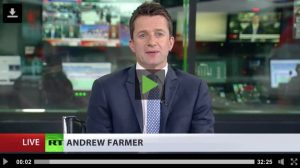 Take an editorial piece in the New York Times this week. The paper is privately owned, therefore presumed to be independent from US government, and is considered a paragon of American journalistic excellence.

Under the headline, ‘Vladimir Putin’s Outlaw State’, it opines: “President Vladimir Putin is fast turning Russia into an outlaw nation. As one of five permanent members of the United Nations Security Council, his country shares a special responsibility to uphold international law. Yet, his behavior in Ukraine and Syria violates not only the rules intended to promote peace instead of conflict, but also common human decency.”

Based on a dubious, partisan investigation released this week on the 2014 downing of the Malaysian airliner over Ukraine and, secondly, on unverified reports of civilian casualties from air strikes in the Syrian city of Aleppo, the NYT accuses Russia of “butchering civilians” and of being an “outlaw state” deserving prosecution in the International Criminal Court.

Such monstrous hubris! For decades, the US and its Western allies have been obliterating international law with illegal wars, destroying nations like Afghanistan, Iraq and Libya, killing millions of civilians – and yet the supercilious New York Times, which provided the justifying lies for these crimes, castigates Russia for “violating rules to promote peace and common human decency”.

The Western media have become so embedded in the ideological matrix of the ruling Western class that they no longer know what the meaning or purpose of genuine journalism is. It is not a public service to inform. It is an administration of permissible public thinking as dictated by the oligarchic complex of corporations, banks and the military-security apparatus.

Just this week, American forces and their various allies killed civilians in Syria, Afghanistan and Yemen. Bloodied children’s bodies were pulled like lifeless rag dolls from rubble in Yemen after US-supported Saudi air strikes continued their week-after-week slaughter of civilians there. 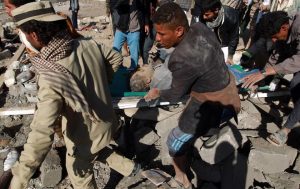 The result of Saudi air strikes in Yemen

No coverage of these crimes in Western media. No emotive denunciations from UN officials. No calls for sanctions, prosecutions or editorial condemnations of Washington and its allies as “outlaw states”.

On Syria, as in many of the above conflicts, it is due to fair and independent reporting and analysis by Russian media outlets that citizens around the world have been able to find out what is really going on.

The proof of Russian news channels are the growing audiences for these channels, in particular among Western citizens. It is the height of elitist conceit for Western pundits and governments to ascribe this paradigm shift to “Kremlin propagandists and manipulation”. People are choosing news services based on their own judgment about which version of news concurs with how the world really is, not how the world ought to be as designated by Western Cold War ideology.

In recent years, Russian news outlets have given international audiences a broader, more accurate view on a whole host of events and issues.

By contrast, Western governments and evidently the mainstream Western media have a uniform, preconceived narrative, or policy of omission, on Ukraine, Syria, Yemen, cyber-hacking, Donald Trump as a “Putin agent”, Russia as a “rogue state”, “accidental” US air strikes, Russia “targeting” UN aid convoys, and so on and so on.

Turns out that many ordinary people out there, including many Americans and Europeans, just don’t buy those narratives as credible. That’s democracy.

They look at Syria and see a covert war orchestrated by Washington and its allies since March 2011, using proxy insurgents dominated by vile terror groups armed and trained by Western powers.

Many people view Syria and its ally Russia as having the legal and moral right to crush this foreign-fueled criminal war of aggression.

Russian media, unlike Western counterparts, have reported crucial information on the real nature of the Syrian conflict and how it has been fomented covertly by Washington. Russian media have also reported on how the West has manipulated disinformation about the humanitarian crisis in the city of Aleppo through such propaganda conduits as the so-called White Helmets “first responders” who in reality are part of the West’s terror proxy army.

This is not “winning an information war”. It is simply telling the truth about what is going on in the world.

But, of course, if your interests are about systematically violating international law and subterfuge, then the truth is indeed a matter of “war”. 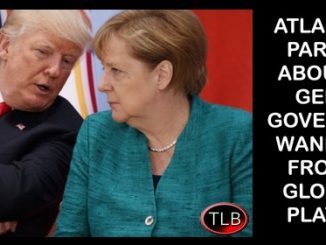 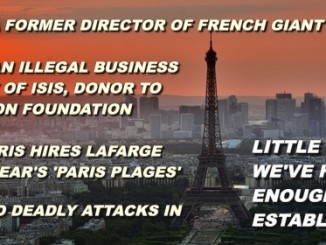 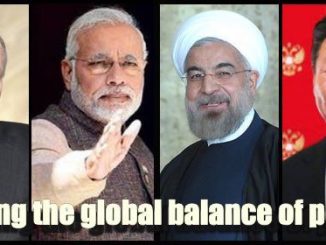