On Wednesday, May 17th, U.S. Vice President Mike Pence, who has built his political career as both a fundamentalist Christian and a client of the libertarian Koch brothers’ extensive fundraising network, made his unofficial but starting bid to become the U.S. President: he has formed an organization to raise funds from billionaires and centi-millionaires, in order for Pence to be able to distribute those wealthy 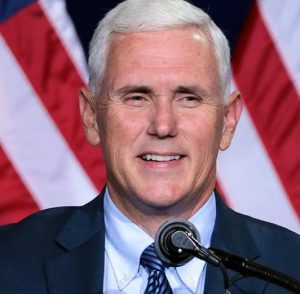 investors’ funds to Republican politicians (especially to ones in the U.S. Senate and House) whom Pence favors, and who might reasonably then be expected to return that favor by their supporting a Pence bid to become the U.S. President. Of course, the Presidency is the only American political office that’s higher than Pence’s current one, the Vice Presidency.
This type of organization is called a “leadership PAC,” and the donors to it are thereby entrusting to the politician who has formed it that politician’s ability and power to serve as the given donor’s agent to select other politicians to become agents of that given donor — Pence is thus becoming a financial middle-man, to control the distribution of those donors’ cash.
As Bill Allison of Bloomberg News headlined this action by Pence, on May 17th, “Pence Takes Steps to Build War Chest as White House Stumbles”. That report opened:

Political action committee registered Wednesday with FEC
Neither Biden nor Cheney had active leadership PACs in office
While President Donald Trump’s White House grapples with the fallout from his firing of the former FBI director, Vice President Mike Pence has taken steps to begin building his own political war chest.
Pence launched Great America Committee, a leadership PAC, a move that will enable him to channel money to congressional Republicans ahead of the 2018 midterm elections. The political action committee’s registration was posted Wednesday on the Federal Election Commission website.

There are only two ways in which Pence can replace the current U.S. President, Donald Trump, while Trump is serving his four-year elected term in that office:
The well-known method is by the sitting President’s becoming impeached by 50%+1 members of the U.S. House of Representatives, and then actually being removed from office by a subsequent two-thirds vote of the members of the U.S. Senate. Of course, Mr. Pence would be helped in this method if some of those members of Congress are partially relying upon Mr. Pence in order to be financially able to retain, or else to become advanced from — such as to become a Cabinet member in a President Pence’s Administration — their current office.
The less well-known method is yet more subject to being influenced by the existing holder of the office of the U.S. Vice President; and this is Section 4 of The 25th Amendment, which starts with:

two-thirds vote of both Houses that the President is unable to discharge the powers and duties of his office.

So: whereas the impeachment-route entails two-thirds only in the Senate, the “disability”-route entails two-thirds in each of the two houses. However,  the “disability”-route is far easier to start: it entails merely a declaration by the V.P, plus the vote of 50%+1 of the Cabinet — no impeachment-trial (no equivalent of a grand jury’s verdict to bring charges in a criminal case) precedes the sitting President’s removal-from-office.

Both routes can be greatly assisted by means of Pence’s formation of his Great America Committee, leadership PAC.

Here is how Mike Pence’s background was described, on May 17th, by the progressive Doug Henwood, under the headline “The Post-Trump Era?”:

What then? President Pence? If Pence were president, the entire Republican dream agenda would sail through Congress in like three weeks. Pence spent a dozen years in Congress (Tea Party branch) and four years as governor of Indiana; he’s an appalling figure but he knows how things work. He might not be able to overcome his party’s internal divisions, but he probably could do a better job than Trump, and every day would not be a circus as it is now.
Pence is a horror — fiscal sadist, misogynist, homophobe, lover of the carceral state. He’s repeatedly described himself as “a Christian, a conservative, and a Republican, in that order,” though given today’s modern GOP, it’s not clear there’s much of a difference among these features. (He should have said he’s a reactionary Christian; there are plenty of other kinds.) He’s a creationist who rejects climate change, thinks stem cell research is “obsolete,” and once actually said that “smoking doesn’t kill.” His anti-abortion law was the most extreme in the country. His cuts to Planned Parenthood led to a rural HIV epidemic. Like Sessions, Pence is a maximalist on drugs, including weed. He’s hot to privatize Social Security. He likened the Supreme Court’s upholding of Obamacare to 9/11.
Should Trump get pushed out, the orchestrated campaign of healing would be painful. It’s not far-fetched to imagine leading Democrats channelling Gerald Ford’s “our long national nightmare is over.” There would be something of what Wall Street calls a “relief rally” on the transition, and it would perversely grease the way for Pence to make the U.S. more like the Indiana he left behind. We should be fighting to keep him in office, as fatally damaged goods.
Several things seem to be driving this campaign to squeeze Trump out, aside from the obvious fact he’s an unstable ignoramus. Dems still can’t get over the fact that they lost to the most unpopular candidate in the history of polling, but instead of blaming their own terrible candidate (the second-most unpopular candidate in the history of polling) and the slavers’ legacy, the Electoral College, they want to blame Russia.

Pence was chosen by Trump because Trump needed the support of two constituencies in order to win: the aristocracy (who control all the large corporations including the ’news’ media), and the fundamentalist Christian clergy (who control a significant sector of the electorate, and who especially do a terrific get-out-the-vote effort of their followers who are far-right Republicans). Pence met both requirements. Here is how I described Pence at the time Trump selected Pence as his running-mate, when I headlined — as it turned out falsely — “Trump Writes Himself Off by Choosing Pence”:

Donald Trump, the Republican Presidential nominee-to-be, has effectively ended his chances to become U.S. President, by his choice of the idiot Mike Pence to be his Vice Presidential choice.
Pence’s only articles about his vision for the nation and for the Republican Party were published at his campaign site “Mike Pence for Congress,” between 1991 and the year 2000, when he finally won a seat in Congress. So, the quotations here will be from that time.
Here will be quoted some of that idiot’s stunning allegations. The dates he said these idiotic things are all no later than 17 April 2000 (as is indicated by the earliest URL listing them being http://web.archive.org/web/20000417191056/http://www.mikepence.com/ where the “20000417” means that it was recorded on 17 April 2000, and so the articles with these titles were linked-to at Pence’s site by no later than that date).

These are Pence’s whoppers there that struck me as the most blatant:
“Time for a quick reality check. Despite the hysteria from the political class and the media, smoking doesn’t kill.”
“Global warming is a myth.”
“The blame-ocracy has concluded that social conservatives, read that pro-life, pro-family voters, were the cause of the [Republican] party’s troubles. … It brings to mind the adage of that great Republican President Calvin Coolidge who said, ‘not all Republicans are stupid people but all stupid people are Republicans.’ The idea that relegating 40% of the GOP vote to second class status is a prescription for victory had to have been concocted in the twisted mind of some overpaid political consultant. … The reason I am optimistic is, apart from God’s sustaining grace, quite simple. Republicans, from George Washington to George W. Bush just have better ideas. … Eventually, Republicans will return to the promotion of those great ideas.”
Get that last one!: George Washington was a “Republican,” and Calvin Coolidge said that “all stupid people are Republicans” — and Pence seconds that thought!

Perhaps I was greatly overestimating the ‘news’ media’s motivation to publicize the stupidity of the V.P. nominee of the candidate (Trump) they were trying to defeat, or else was overestimating the ’news’ media’s interest at all in truth. But either way, the ‘news’ media ignored those facts that I documented about Trump’s running-mate.
However, liberal ‘news’ media did publicize, as the Democratic Party’s The Nation magazine headlined it, that “Vice President Mike Pence Would Be a Dream for the Koch Brothers”. And, perhaps the reason that this Democratic magazine, during a Democratic Presidency (Obama’s) which was pushing for passage of the (fascistic) Trans Pacific Partnership treaty that Obama was promoting around the world, ignored Pence’s support for Obama’s proposed TPP, was that virtually the entire aristocracy were pushing for passage of that treaty (for reasons that I have explained but which the ‘news’ media continue to hide).
So: now there is a strong campaign by Democrats, both in the mainstream and ‘progressive’ wings (such as Keith Olbermann), to be pushing for Pence to replace Trump.
************
Investigative historian Eric Zuesse is the author, most recently, of  They’re Not Even Close: The Democratic vs. Republican Economic Records, 1910-2010, and of  CHRIST’S VENTRILOQUISTS: The Event that Created Christianity.
Featured photo credit:  Getty
Share this...

Blatant Violation by U.S. & Its Allies Against the U.N. Charter